I'm at a Honda dealership in Hagerstown. We're at this dealership because Becky's air compressor has gone out, so she is undriveable. Daddy and everyone else are very frustrated, and our drugged-up cat is also distressed...more than usual. The tranquilizer has made her lose the ability to control her eyes, so she kinda looks creepy and cross-eyed. She refuses to just ride the high, probably because she's never been stoned before. She's been meowing a lot and hiding under chairs in the waiting area. The part is taking forever to get because of an accident nearby, and the whole thing is going to cost about $1000. The crappiest part is that I JUST had Becky checked over (for $200!) at the mechanic on Friday!

So we're losing a whole day of travel...because of me. What a helluva way to start a road trip.

Luckily, it took less time to fix the car than we thought; we ended up leaving around 3:15pm or so and drove with only one stop until Cambridge, OH, which is where we're hunkering down for the night. (Claire will be updating as soon as I'm done writing this.) Uncle Chris had been hoping to be in Columbus (another 88 miles away) by now, but *shrug* "Stop, Hammertime," as I like to say. (I HATE the phrase, "It is what it is" and have decided to use this other phrase in its place.) We had a good dinner at Ruby Tuesdays, and Claire and I had some drinks, so we're feeling much better. 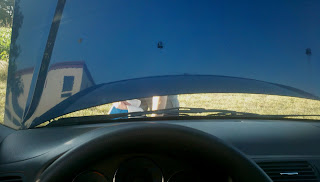 View from the driver's side as Steve tried to figure out what that distressing noise was and where it was coming from. (Pre Honda dealership)
Posted by Claire (and Nikki) at 8:26 AM