Because of my love of football, I insisted that we stop off at Arrowhead Stadium, home to the Kansas City Chiefs. LeRon McClain, formerly of the Ravens (*SNIFF!!*), will be playing here in the fall. (We didn't see him unfortunately.) We also stopped by and took pictures of the Kansas City Royals' stadium because it was right next door. 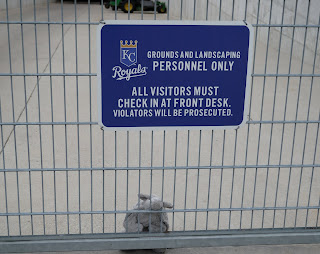 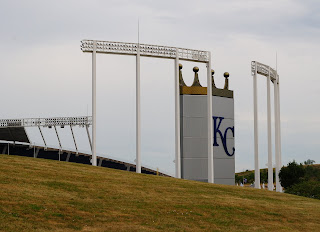 Kauffman Stadium. That day, the Royals beat the Orioles mercilessly. At this point, playing Baltimore is probably like beating a Little League team of 5th graders: unsatisfying. 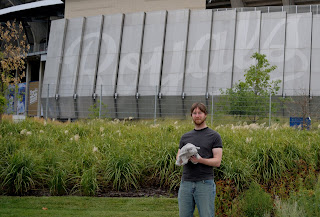 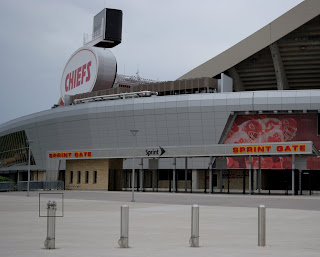 Click on the picture to enlarge. Then you can actually see me!! (I blend in really well with the posts.)

On our way out of Missouri, we saw yet ANOTHER giant cross! I wonder how many of these are scattered throughout the Midwest. I also wonder if you can climb steps to the top. That'd be cool. 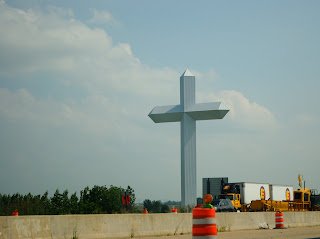 Before we left, we stopped off at a rest stop for a stretch and a bathroom break. Nikki thought that giving Tasha a stretch break would be a good idea too. Tasha didn't really agree. 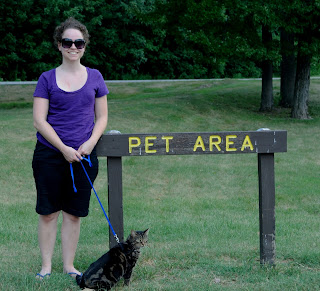 Next up, KANSAS! All we've been hearing from anyone who's driven through the state is that it's flat and boring. I can't imagine that it's that much worse than Illinois....
Posted by Claire (and Nikki) at 2:31 PM