Nikki and I went back to Baltimore for Christmas with just the black suitcase and her purse. This is all we're leaving with: the suitcase, her purse, a carry-on from her mom, and a book bag she borrowed from Ginger Jon. Why all the extra luggage? While there are some Christmas gifts in the brown bag, most of the luggage is stuffed full of Utz chips. Nikki LOVES Utz chips. She's also tucked four bottles of Maryland wine into the suit case between all her clothes. Luckily Southwest Airlines allows passengers to check two bags and have a carry-on and a "personal item" to take with them on the plane FOR FREE. I highly recommend flying with them during the holidays. 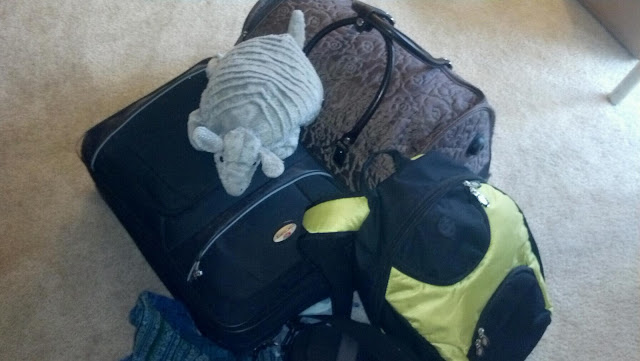 Creatures of the Night

I was in the mood to feature night animals and other silly things on the white board at work. This wasn't a terribly popular subject, so I've suggested that Lyndsay be in charge of choosing the next topic. 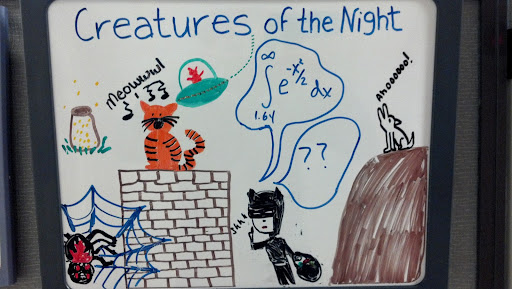 I started us off with the howling coyote on the right side of the board. There are a lot of coyotes in my area; we heard some fighting & squealing late at night last week on the Cherry Creek Trail. There's a Batman-looking jewel thief/cat burglar and a singing, howling cat a la Garfield. Twila, who works in one of our school's centers, drew the jar full of fireflies. I have no idea who drew the black widow spider, but as an arachnophobe, I must admit that it makes me uncomfortable. 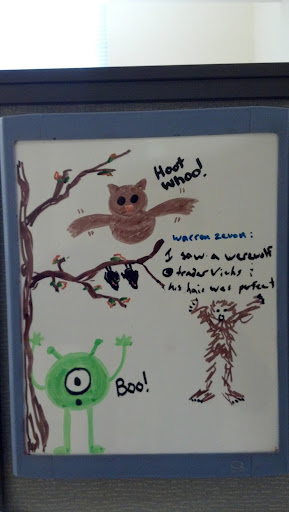 On the second white board, my owl flies over everyone, hunting for food. The Sasquatch (Carol's) roars to scare away hunters. (I don't understand the quote: "I saw a werewolf @ Trader Vicks & his hair was perfect.") I committed copyright infringement with my doodle of Mike from "Monsters, Inc." Anne was supposed to draw the bats, but Kevin beat her to it.