I follow a local Twitter feed that tells people about special events going on in the Denver area. (I Know Denver, by the way.) Last week, they posted a notice that the Denver Museum of Natural Science (DenverMuseumNS on Twitter) was having a "tweet-up," which is a group get-together that you learn about on Twitter. (That's my definition anyway. The Urban Dictionary definition is much cruder.) All they asked was that we a) enjoy ourselves and b) tweet about our experiences and use the hashtag "#dmnstweetup."

For those who aren't Twitter-knowledgeable, a hashtag is like a common link that people on Twitter use to talk about a certain topic. Someone could search for the term "DMNSTweetup" on Twitter and see all of the tweets that people at the tweet-up using that tag were making. Hashtags range from the practical, like the tweet-up hashtag, to the ridiculous like the recent "#thingslongerthankimkardashiansmarriage.")

The tweet-up met up after regular museum hours so we could have free access to the T-Rex Encounter. Animatronic dinosaurs that follow your every movement?! FOR FREE?! Sign me up!! AND we were being given this special access by the curator, Joe Sertich ("Curator Joe"). Check out the website for the details; it's a lot cooler than I could describe. While I'm fairly certain she'd freak out from fear, I'd love to be able to take Mia (my three-year-old niece) to the exhibit. I can see her roaring back at the T. Rex if surrounded by the right audience. ;) 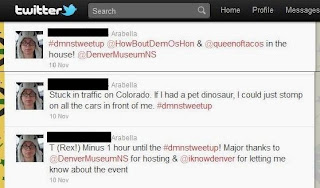 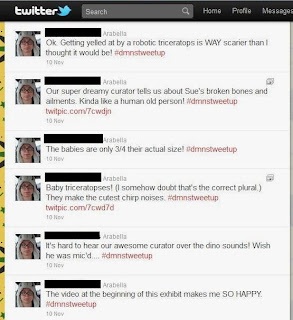 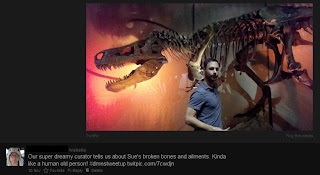 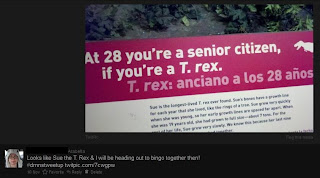 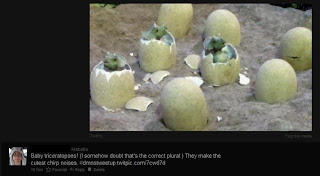 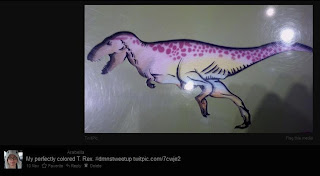 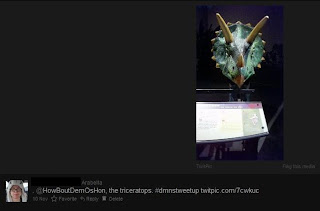 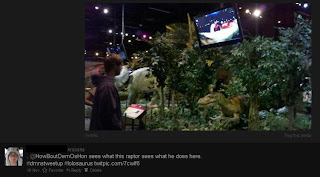 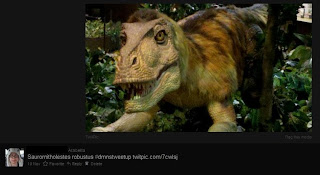 After spending an hour wandering around the exhibit, we were blessed with a special treat: we got to go "backstage" in "the Bone Room," where the museum houses the fossils and bones that are a part of the Snowmastodon Project. Up in Snowmass, CO, a ski town, construction workers were digging a reservoir when they kept unearthing mastodon and mammoth bones, along with the bones of other ancient animals large and small. They stopped their digging, and scientists and volunteers from DMNS swarmed into town. The sheer amount of bones they found is incredible. And these bones are considered "modern fossils," meaning that minerals from the earth haven't replaced the bone. (Thanks to Scientist Steve for helping me phrase that correctly!) So instead of having to brush away the dirt from the fossils gently so as not to destroy the bones, the excavators just had to wash the dirt away. Seriously, read about the project; it's insanely impressive and geek-out worthy. 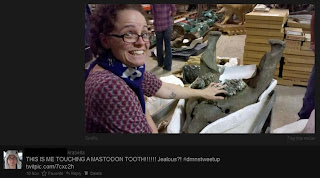 Note to scientists: I asked Curator Joe if I could touch the tooth first, and I touched it EVER SO GENTLY. Steve, when I asked if he wanted me to take a picture of him touching a mastodon tooth: "I'm a scientist. I appreciate things with my eyes and my mind." His loss. :P 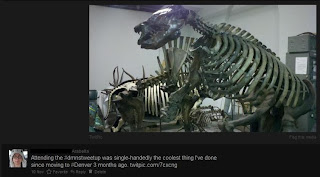 BONUS!!! Just found this video of the Saurornitholestes that another tweet-up visitor posted!
Posted by Claire (and Nikki) at 10:11 PM No comments:

Hi y'all!! I'm determined to make this weekend a "lazy" weekend in that I'm only going to clean out my DVR, do my homework, and UPDATE THE BLOG!! I've got several posts coming. Steve and I went to the Denver Art Museum for free recently, and we went to the Denver Zoo (with Claire!) for free that same weekend. Steve and I also went to a tweet-up at the Denver Museum of Natural Science, so I'm going to post my tweets from that event here as well. I'm gonna have TONS of pictures and a bunch of videos as well, so keep your eyes peeled this weekend!

Until then, please enjoy this video of the elk infestation in Steve's aunt and uncle's neighborhood in Evergreen, Colorado.

You'd think that Claire would be stoked to celebrate snowy days in Colorado. Today is the second in a few weeks. But no. Claire and I went out on the balcony, and within seconds, she was complaining about the cold. Maybe I'll buy her a scarf and some mittens or something, see if that changes her opinion of snow.

On the other hand, *I* am *crazy stoked* about the snow! I did a little dance late last night before going to bed...my own kind of snow dance. I love snow. LOVE IT. A snow day is a perfect excuse to stay in pajamas, drink Bailey's and hot chocolate, and watch crap TV. (Fun fact: unemployment is also a great excuse for all of those things).

I forced Steve to go outside with me this afternoon and take pictures of me playing in the snow. He also helped me clean off my car, which was very nice of him. Steve isn't a big fan of being cold; he's too skinny and long, so his toes and fingers always get frozen really fast. Poor Steve. 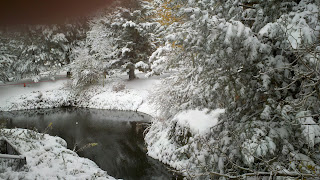 Pardon the finger in the upper left. :P
View to the left of my balcony this morning. So peaceful and pretty! 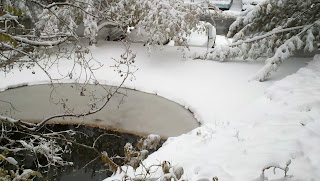 View to the right of my balcony this morning. Note that the pond was partially frozen! 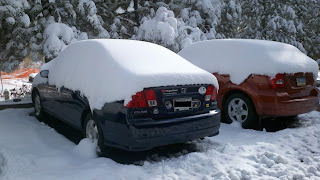 My car Becky (the blue Civic with all the Maryland bumper stickers) covered in ~6" of snow. 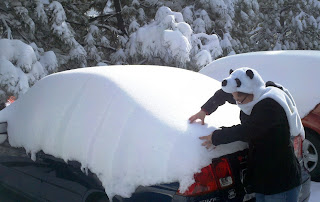 Trying to melt the snow WITH MY MIND!!
"What the hell is Nikki wearing?" you may be asking. I'm wearing my pandahatmittenscarf that my friend Gen bought for me. It's a hat! It's a scarf! It's got mittens! The best of all worlds! 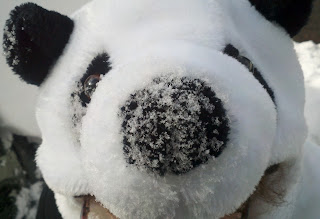 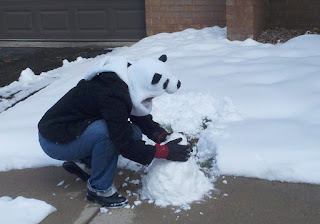 I decided to end my play time outside by building a snowman! I chose a spot in the front of my apartment building and started building. 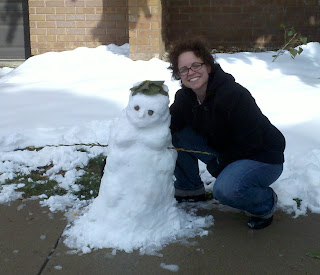 Unfortunately, I'm not very good at building snow-men. Or snow-women. Or snow-whatever-this-is. Steve said that it was the saddest snow-thing he's ever seen. I think he's jealous.