Kansas Tried to Kill Us

Eventually, Kansas got a little boring. VERY VERY pretty, but occasionally boring. I think "car fever" (like "cabin fever," but in a moving vehicle) was starting to set in, because as we drove down that long, long stretch of I-70W, it started looking like the road was driving into nowhere, into the horizon, INTO A NOTHINGNESS SO PROFOUND THAT MY TINY ARMADILLO MIND COULD NOT COMPREHEND IT. 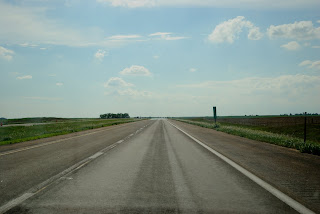 Just as I started realizing that there WAS an end to this road and not a complete drop into the end of the world, GIANTS WITH HORRIBLE, FLAILING ARMS CAME INTO VIEW AND SURROUNDED US!

Tasha was sleeping in the backseat, snuggled up on Steve's pillow, which was on the floor of the car behind the passenger side seat. 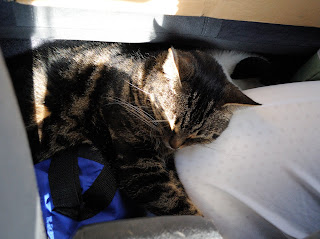 I don't get it. We'll be on flat land, nothing interesting going on at all, and she'll be roaming all over the damn car, meowing her head off like she's warning us the British are coming, but when rotating monsters in the horizon are preparing to attack, she sleeps through the whole ordeal. CATS.

Nikki finally explained to me that the giant things were "wind turbines," which the state uses to generate natural energy. So rather than burn a bunch of coal, which causes a lot of pollution, to make electricity, Kansas takes advantage of the fact that it's flatter than a squirrel on the double-yellow line and uses these turbines (like windmills) to get electricity. Knowing that they a) weren't trying to attack me and b) creatures being used for good calmed me down a bit. 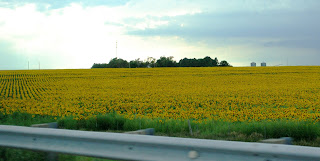 SUNFLOWERS!!! (Photo credit Steve. As always, click on the picture for a better view.)

So there we were, innocently driving through Kansas, admiring the beautiful and bounteous sunflowers that grow all over this part of the country. We had passed through Nothingness and Wind Turbines, and the future was looking promising....


THEN THE STATE TURNED ON US WITH A CLOUDY VENGEANCE! 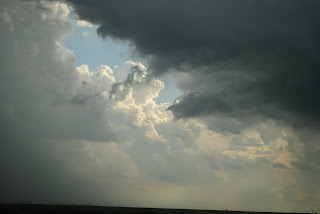 Dark clouds began an epic assault on our soft, white, fluffy friends and smote them mightily. We were driving into something awful... 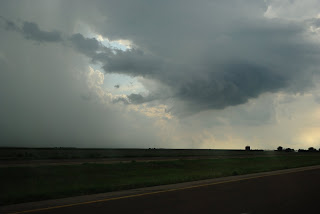 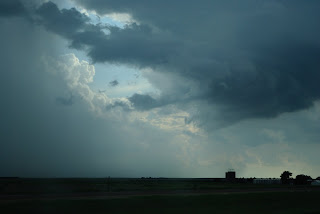 The Wicked Witch was coming for me! She was obviously furious that Nikki and I escaped her trap in the poppy fields and was going to finish the job she started by sucking us up in a tornado and taking us back to Oz! Once the rain started falling, Tasha woke up (she HATES storms) and started meowing, so for quite some time, there was chaos in the car.
WILL WE SURVIVE?!?!?!? You'll have to wait for the next post to find out!!!!!
Posted by Claire (and Nikki) at 9:32 PM