I started off the day fairly confident that things would go well. Tasha was given her 1/4 of a tranquilizer pill, and while Nikki and Steve packed their cars, I watched the cat to make sure she was doing ok. Unfortunately, the pill seemed to tweak her out more than just driving in the car would have!! She kept stumbling around and meowing and looking at me all cross-eyed with this sad look of betrayal on her face. Now, I haven't been stoned before (armadillo's honor!), but it's my understanding that you should just chill out and go to sleep. Tasha was fighting it though! When we got into the car, I sat in the box we had made for her, and she wouldn't lay down with me! She kept stumbling all over the car and climbing on Nikki while she was driving. Nikki's a bad enough driver; she doesn't need a stoned cat flopping on her while she's trying to steer. 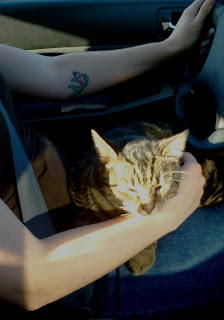 We ended up having worse problems than Tasha; Nikki's air compressor went out, and we had to spend about FIVE HOURS at the dealership, waiting for them to fix it! I don't know what everyone else did, but I ended up stuck in the damn box the whole time, listening to the mechanics' crappy rock music and ROASTING. Luckily, armadillos are used to high temperatures, so I just curled up and waited it out.

Finally, we finished up and headed out. Steve put Tasha in the box with me again, hoping that all the stress of wandering around an unfamiliar place would've calmed her down enough to sleep. 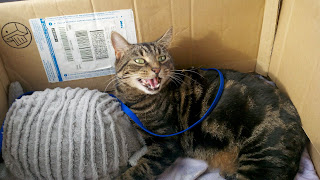 I'm not as comforting as I previously thought. :P

After a pit stop for gas and bathroom visits (Tasha and I decided to hold out for the hotel instead of risking a gross disease in a rest station bathroom), we FINALLY made it to the hotel in Cambridge, OH, about 88 miles short of the (from what I'm told) ultimate destination of Columbus, OH. We're staying at a lovely Comfort Inn, just off the highway. 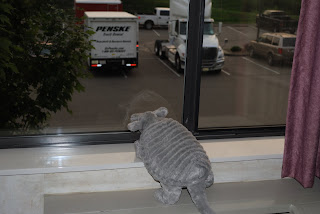 (The Penske truck has our belongings in it!) 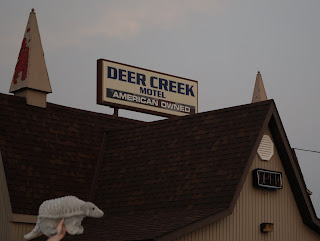 Quaint hotel behind ours 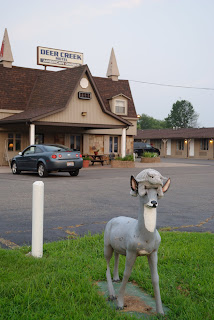 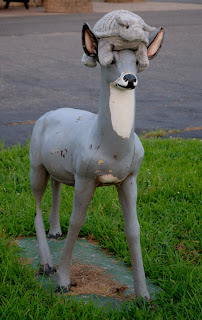 I made a friend! :D
After a long, EXHAUSTING day, we ended up at Ruby Tuesday for some good food (I had their salad bar) and DRINKS. Nothing soothes an armadillo's frazzled nerves like rum and Coke. I'm ready for bed. 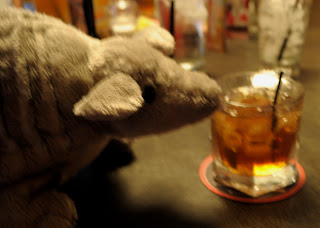 Blurriness created to simulate my state of mind.
Tomorrow, I don't know where we're going, but I heard Steve say that he's not giving Tasha as much of the tranquilizer tomorrow as he did today. We'll see how that works out. I just hope I get a chance to get out and stretch my legs somewhere interesting tomorrow!!
PS: Tasha, unlike Kaya, did NOT lose control of her bladder. I guess cats are just better controlled than dogs. :P
Posted by Claire (and Nikki) at 9:03 PM