The weekend we arrived, Steve and I took my parents to Rocky Mountain National Park, which is one of the most gorgeous places in the country. I wanted my mom to understand why I probably wouldn't be moving back to Baltimore after I finished grad school out here; after seeing the mountains and everything that exists so close to Denver, she finally got it. I'll have to come back some time with Claire, as I think she'd get a kick out of the tundra and standing on top of the high cliffs. Plus, Steve wouldn't stop and let me climb all over a giant snow pile (glacier?), so I'll have to go back anyway. 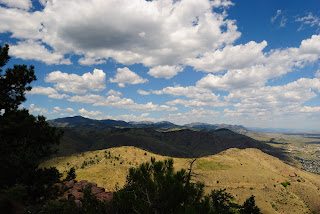 One of my favorite things about the Rocky Mountains are the clouds and how big and fluffy and majestic they get. Sometimes, when conditions are right, and you're driving through the mountains, you'll actually drive THROUGH the clouds and end up above them. It's a surreal feeling. I love how the clouds cast shadows on parts of the hills and mountains. I love how you could be driving in warm, sunny weather, and without warning, there will be a rain shower all over you. Then it passes by as the cloud moves overhead, and you're left in the sunshine again. 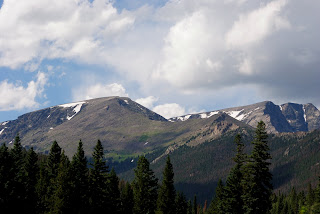 The highest points of the mountains are perpetually covered in snow. The first time Steve and I visited was in late May, so there was still snow on the lower parts of the mountains too. As we were driving up the road, we stopped and had a snowball fight...while wearing tee shirts and shorts! 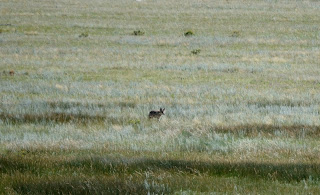 First animal spotted in the park: a coyote!! I took this with my telescopic lens and cropped it so that the coyote could be seen a little better, and it's STILL really far away in the photo. I never would have spotted it if there hadn't been a park ranger nearby, making sure that people didn't run into the meadow to get a better picture. 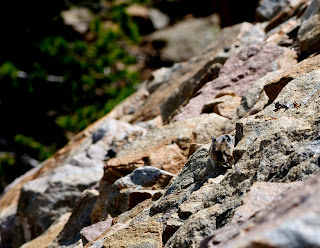 I spy with my little eye, something small and adorable... 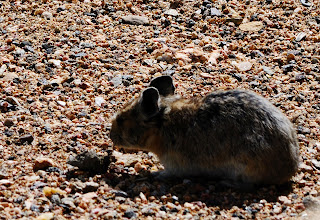 It's a pika!! This adorable, bunny-looking rodent was running all up and down the cliff-face, looking for things to eat. Everyone with a camera (myself included) was scrambling to take pictures before it hid in the rocks forever. I apologize for the poor photo quality; I don't think that I made time to switch from "landscape" to "portrait" on my camera.

We climbed higher and higher until we reached the alpine tundra. Because the land is at such a high altitude, very little can grow up there except some kinds of shrubs, mosses, and flowers. Definitely no trees. A tourist sign in the tundra explained that because of the harsh growing environment, it can take CENTURIES for these plants to grow back if disturbed. Of course, that didn't stop ignorant people from walking all over the damn place. I won't get into how angry it made me, as it would involve me going into graphic details about the crimes I would have committed, had I not been (and still am) an Upstanding Member of Society, but believe me, my parents, Steve, and I were pretty pissed off. I chastised two children. I'll leave it at that.

An exciting sight up in the tundra.... 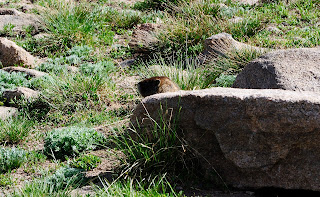 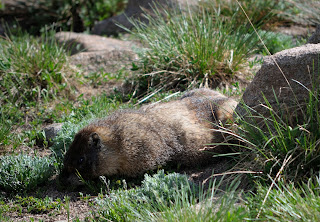 A marmot!! There were actually several wandering around together,  scampering amidst the rocks, but for some reason, people only seemed interested in taking photos of one. My dad noticed the others and called me over so I could take pictures. They're not as cute as pikas, but it's still weird to see something ALIVE that high up. 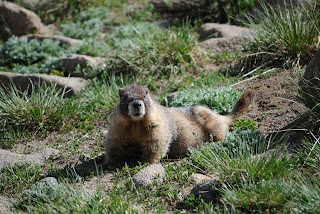 *gasp* Who ARE you people?!

The Alpine Visitors Center is at the highest point you can drive to in Rocky Mountain National Park. Adjacent to it is a long staircase made of rock and wood that's about 500 steps high (although it seems higher when you're walking up it). When you get to the top, you are standing 12,000 feet above sea level. Steve and I walked up the steps the last time we visited Colorado (in 2009), and about halfway up, the altitude, combined with my being out of shape, almost killed me...at least it felt that way. I was keeled over, gasping for air about halfway up, telling Steve, "Leave me! *wheeze wheeze gasp* Go on without me! *GASSSP*" Steve, ever chivalrous, gasping himself, refused to leave any soldier behind. We made it to the very top, and after catching my breath, I had him take a picture of us standing at the summit. 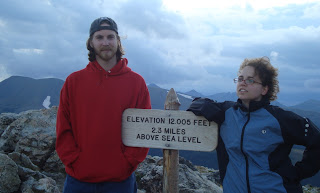 Not shown in photo: my heart and lungs about to explode

This time, the stairway was closed for repairs, so we had to make do just visiting the Center's gift shop, which my mom loved. Daddy also bought some jams (elderberry), as he is a fan of jams, and Steve bought me a raspberry cordial because he is romantic.

Here's some pictures of the aforementioned snow, still hanging out on the mountainside: 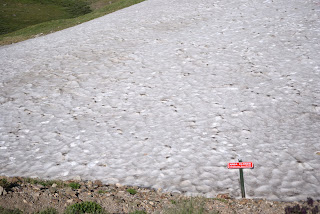 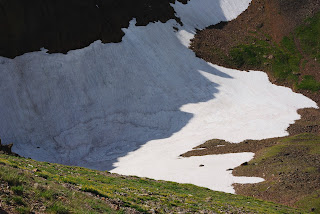 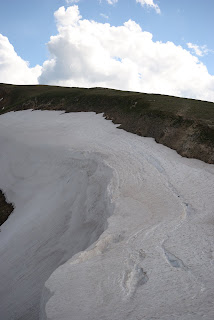 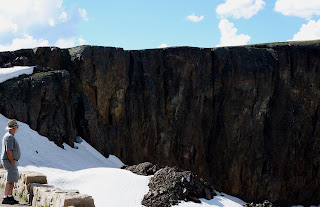 My dad's a big man, but he seems so small up in the mountains.
Posted by Claire (and Nikki) at 7:02 PM