Tasha and I have safely returned (escaped) from the kennel. I think Tasha and I both have colds, so Nikki's going to make vet appointments for the both of us on Monday. She kept profusely apologizing when she picked us up, because it was obvious that both Tasha and I had given up all hope of her ever coming back.

The first couple of days weren't so bad. It was just me and Tasha, hanging out, not doing much other than sleeping and eating. I kept asking the kennel "care"-takers if they'd mind letting us out so we could wander around and stretch our legs, but apparently, no one there spoke armadillo. On the third day, a Persian named "Mr. Fluffyface" (that poor, poor cat) joined us in another cage (cell). He was an ok conversationalist but tended to brag about his pristine living conditions up in the mountains. After she couldn't take it anymore, Tasha finally asked him why, if the mountains and his house were sooooo great, he was stuck in this kennel by a damn water park like us? That shut him up, which was both good and bad. We had sort of gotten used to his nasally intonations. He left a few days after and blew us a raspberry behind his owner's back as she carried him out the door. Good riddance.

By day six, we were convinced that Nikki was never coming back. She had said that she'd visit us, but we later found out that the staff had told her that it'd be "too confusing" for Tasha and me if Nikki came to visit and then left without us. I can see their point, but it's rough being far from home and surrounded by unfamiliar people and the haunting noise of howling dogs echoing from wherever they housed the dogs.
FINALLY Nikki came to get us, apologies spilling from her lips. It took about 45 minutes in traffic to get to our new apartment, and Tasha was a PSYCHO the WHOLE RIDE. She just wouldn't shut up!! I started to worry that she had forgotten who Nikki was, but I think she was just so elated to be out of the kennel that she couldn't sit still and couldn't keep her mouth shut.

It's taken Tasha a few days to adjust to our new home. It's a huge two bedroom apartment with a big living room and....A FIRE PLACE!! How cool is that!!?? I'm totally roasting marshmallows when it gets cold enough. There's also a great, big deck attached which overlooks some trees and a pond. Tasha is enthralled and loves being outside, something she never really got to do when we lived in Baltimore. Of course Nikki doesn't really trust Tasha as far as she can throw her; my cat friend must be supervised at all times to make sure she doesn't see something interesting and throw herself down two floors to the brush below. Honestly, I don't think Tasha's stupid enough to escape, but I DO hold her in high esteem, so...we'll see. So far so good.

Nikki says that since they still don't have all their new furniture and the place is basically still kind of a mess, I'm not allowed to take any pictures of the new place. BUT!!! I had Tasha take this one when Nikki wasn't looking. 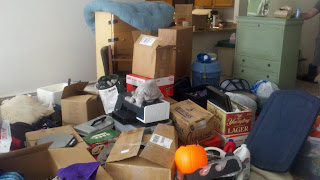 This is from my first day back. I was shocked that they had so much stuff, and that Nikki and Steve managed to get it all into the apartment on their own!!

Nikki assured me we should get most of the new furniture this weekend, so keep an eye out for me giving you all the grand tour!!

To end this blog on a super happy note, here's a postcard that Nikki's mom Diane bought for me: 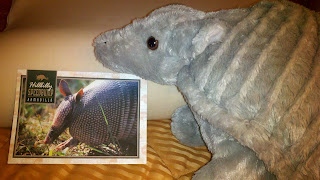 The resemblance is striking.
Posted by Claire (and Nikki) at 3:32 PM