Tracy and I have decided to make drawing on her white boards an "official" team-building exercise to boost office morale. We've come up with a few themes that we think will be fun for people to draw, and we've added more colors to the marker collection. Our last theme was "Wild West," and after a period where no one quite knew what to draw, our scene exploded with dancing ladies, a covered wagon, and a robbery. 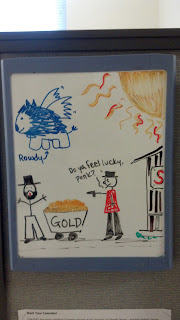 These were my contributions to the scene. Here you can find Dirty Harry (in his signature poncho) robbing a gold prospector. This may be out of character for Harry, but seriously, if YOU saw a guy with that much gold, wouldn't you rob him too? Rowdy is a "buffalo" (actually a bison, per the PCC, but we'll let this one slide) that is the mascot of the University of Colorado. Tracy has a stuffed Rowdy in her desk area, so I attempted to draw this majestic beast. Obviously, the drawing was awful, so I drew wings on her and left it. 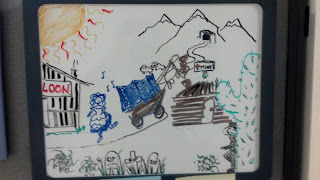 The more elaborate second half of our scene. I added the graveyard because I'm creepy like that. You'll find our town's reluctant sheriff, saloon dancer with a heart of gold, homesteaders, and the mine from which my prospector hit it rich in this photo. We are obviously not concerned with artistic things like "perspective" in our drawings because let's face it, it's hard to draw really intricate things on a white board. 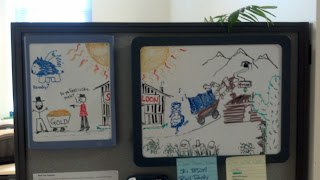 The completed scene
Posted by Claire (and Nikki) at 1:19 PM