Camping in the Cold

During the second weekend of September, Nikki, Steve, Eva, and I all piled into Steve's over-packed car and drove two-and-a-half hours south of Denver to Spruce Grove Campground, which is at a higher altitude than Denver, as it's in the Rocky Mountains, near Pike's Peak. It was a tiring but pretty drive, with some of the aspen leaves already transitioning into their autumn yellow, but it would've been A MILLION times better if Eva hadn't whined and whimpered THE ENTIRE WAY DOWN. Seriously. I thought Nikki was gonna leap into the back of the car and strangle the dog!! I don't know when Eva developed a dislike of riding in cars, but she was quiet for only maybe fifteen minutes the whole time. 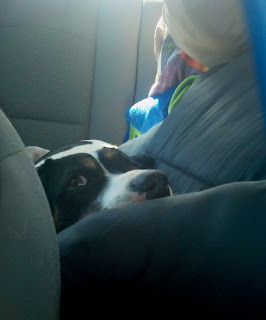 When we finally arrived to the campsite, we discovered that, while it was idyllic, it was also a walk-in site, which meant we had to park the car and carry all our stuff over a bridge to the site. 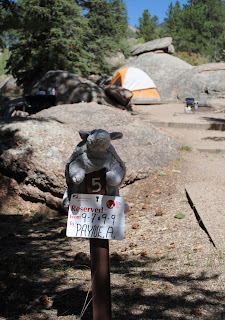 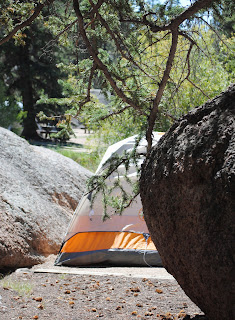 View from a little hiding spot behind the campsite
that Nikki had to go to because she was having an anxiety attack
and needed quiet.

After the tiring trip, we decided that before setting up the tent, we were gonna chill on the nearby riverbed with Mandy and Camden and Mandy's friends Allison and Andrew. Allison brought her dogs Gonzo and Trixie, so there were several pups all running around and vying for our attention. 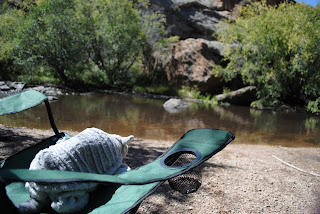 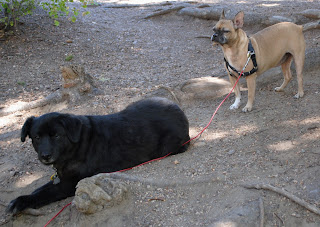 Trixie is the black dog, and Gonzo is the little one. 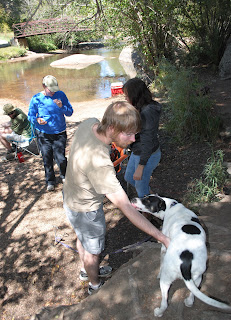 The gang. Andrew is in the chair in the background,
and Allison is in the blue jacket. 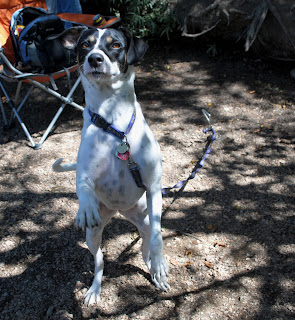 A little later, Nikki and I decided to hike up the mountain (for lack of a better term) and climb on top of this giant rock formation right next to our campsite. The climb was steep, but Nikki said that the climb to Hanging Lake (check out her pictures starting with this one) was waaaaaaay worse and longer. Now, I'm not really scared of heights, but standing on top of a giant rock that towered above the whole valley was kinda making me nervous. As such, I made Nikki not take any pictures of me; I didn't want my fans to see me freaking out. :p 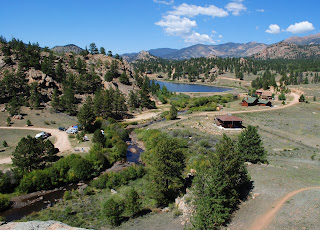 View to the right of where we stood on the giant rock.
We couldn't find a way to get to the lake from the campground. 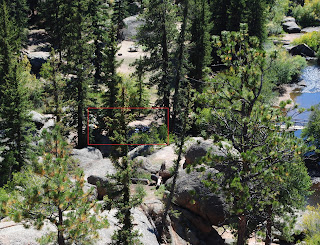 View from the backish part of where we stood.
The space inside the red box is our campsite! 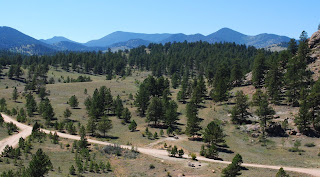 View to the left of where we stood. This is the rest of the campground.
I think Pike's Peak is one of those mountains, but I don't know.

For a while, Nikki laid down on the rock and just looked at the sky and listened to the Christian youth group down below perform slam poetry about Jesus and finding their future wives. (I'm not joking. We couldn't hear all of it, but it was hilariously awesome and very earnest.) Nikki wanted to take some "selfies" (formerly called "MySpace photos," but that site barely exists anymore, so someone made up this new name, which is a shortened version of "self-portraits"), but it's REALLY hard to do with a fancy camera like her Nikon D3000. These are the best out of the ten or so she took: 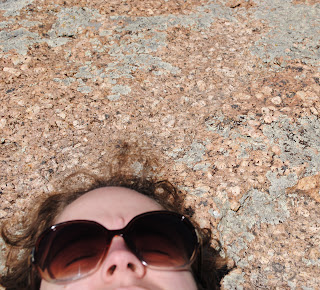 Steve's favorite. He thought it was hilarious. 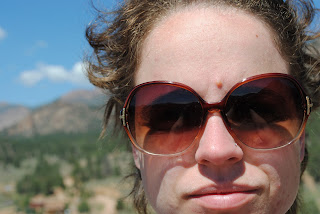 Nikki's favorite. At least you can see the mountains in the background.

Obviously, Nikki's arms are too short to do a selfie properly, and she won't let me touch her camera, since I have the tendency to break her things by accident. :p

Eventually we climbed down and joined everyone else. Cam and Steve had gone snake-hunting in the river, and Camden actually found a snake!! Nikki didn't get a picture of it, unfortunately, but Andrew did. If he ever sends the pictures to Mandy, I'll add them here. It was a garter snake and kinda big too. The other kids playing in the water were SUPER excited, and Cam was proud to show Steve that he had found a snake. 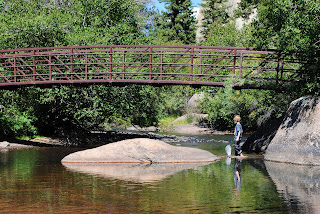 On the hunt with his trusty net

The rest of the night went pretty typically. We set up a campfire, cooked hamburgers (except for Andrew, who keeps kosher, so he brought some "boil in a bag" Indian food), and Nikki read a zombie story that she had started during the last camping trip. Camden LOVES ghost stories but gets scared easily since, you know, he's 6 years old. Mandy likes listening to Nikki tell the stories because Nikki does voices for every character. We stayed up chatting then went to bed.

Like the first time we went camping with Eva at West Chicago Creek,she and Steve took up most of the room on the air mattress. Only this time, THEY STOLE ALL THE COVERS TOO!! We had our usual set-up of two flannel sleeping bags, the comforter, and two extra blankets, and Nikki and I got a sliver of one of the sleeping bags and that's it. I woke up at one point and noticed that Eva was actually under the blanket Nikki had been using!!

Somehow, we survived the night and spent the morning packing up the campsite. (Well, Nikki and Steve cleaned up the campsite. I don't do manual labor.) Eva was shivering, as it was still about 40* outside, so Nikki tied her hoodie around Eva, as no one could find Eva's dog sweater before we left to go camping. Eva would've appreciated it, I'm sure, were she not super uncomfortable in it. Camden, however, kept Eva calm by petting her and talking quietly to her. 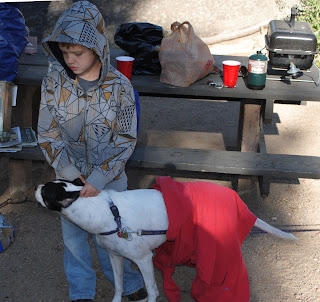 Nikki offered to drive home, since Steve had driven all the way down. Eva still whined, but much less than she had on the way to the campsite. We stopped at a Safeway in a small town to pick up some breakfast food. Nikki got a burrito for herself and a bacon-egg-and-cheese sandwich for Eva. After having such a heavy meal, Eva DEFINITELY calmed down.

While we were driving back, Nikki pulled over to take a picture of a sign she had seen the day before. It was a "point of interest," as the sign said, but the part that stood out to Nikki was a bunch of white rocks that spelled out a giant "YOLO." YOLO stands for "You Only Live Once," and according to Nikki, it's only used by "idiots on the internet and teenagers." [Nikki Note: The link takes you to UrbanDictionary.com, which is a great resource for finding out the meaning of slang words, but is user-generated, so it contains adult language.] 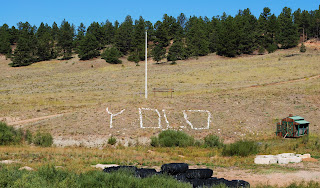 Dang kids. Pretty good prank though, if you ask me.

This is the real reason why this location is a point of interest: it's a historical site that used to house Native Americans of the Ute tribe. Of course, it's kinda lame to look out at a place with fields and a pile of used tires and a small gold mine and think "Native Americans used to live here until settlers moved in and kicked them out." I'm not gonna get into it, but I'll just say that I think the Utes got a raw deal. 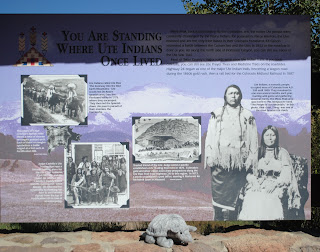 It's hard to read the text on the board, so I recommend
going to the website I linked above.

This point of interest was located just outside of Florissant, Colorado, which is a small town that's claim to fame is the Fossil Beds National Park, where people found a TON of fossils in this lake bed. (We didn't get to stop here.) 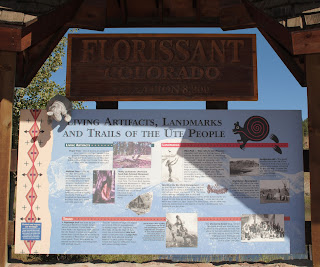 (More info on the Ute Indians too)

The other big deal about Florissant is that they're a part of the Gold Belt Byway, which we *also* didn't get to see. [Nikki Note: We had a psycho dog in the car. I wanted to get home as quickly as possible.] 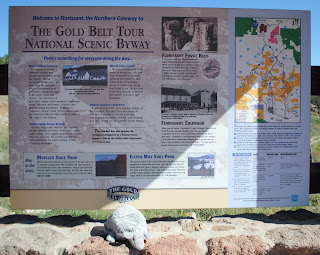 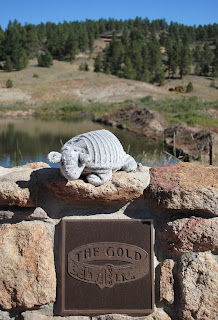 You can *almost* see the little gold mine that was there to the back right
of where I'm sitting.

So that was our trip. Not super exciting, but at least it was really pretty and we got to go camping before it REALLY gets cold out! Nikki has also sworn that Eva will NEVER go camping with us EVER again, as it's too stressful for everyone involved. Maybe next time we go camping, then, I'll actually get some blankets!