Nikki Post: We're All A Bunch of Clowns Here

The number of people in the office who participate in the white board game is growing. We recently got Anthony, our Director of Finance, to draw something, small though it may be. Teri, the dean's executive assistant, suggested the theme of "circus," and as usual, my coworkers and I went wild. 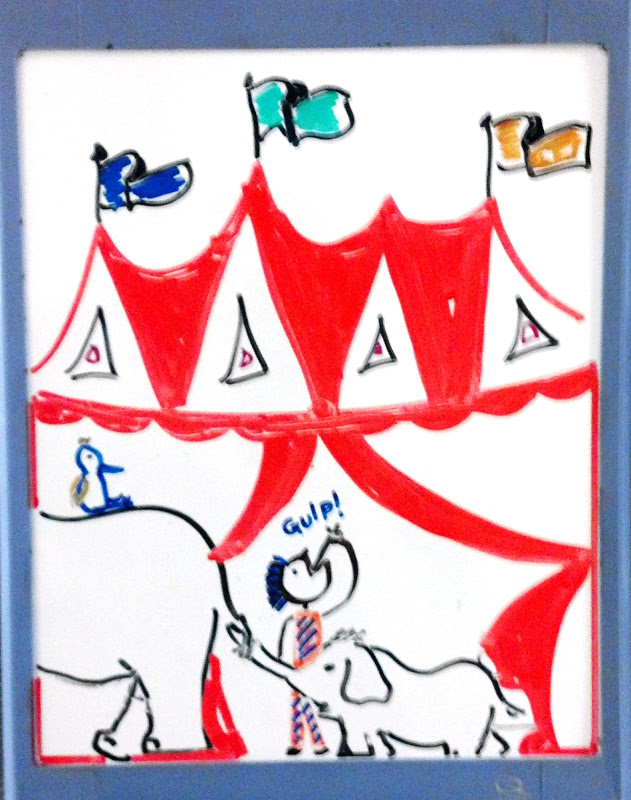 We start our tour of the circus outside the big top, along the midway where a sword swallower does his thing, and a bird (penguin?) rides a mama elephant while baby tags along. Kevin drew the elephants, and everyone was really, REALLY impressed with his skills. Seriously, look at that baby elephant. How cute is it?! 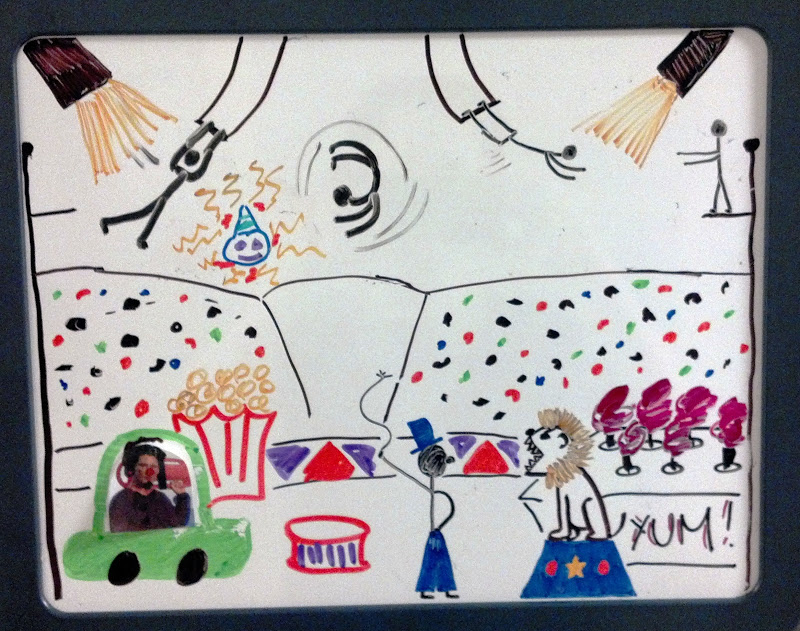 Once inside, the crowd (those dots) were treated to a stunning display of activities, all apparently happening at once. High above the crowd, and performing without a net (!), an acrobatic band of brothers twirls and swings through the air, their every move highlighted by spotlights. (I mentioned to Teri that I realized too late that, practically speaking, all of these acrobats except the one standing on the platform would probably die because it didn't look like they'd be able to catch one another, but Teri assured me that it was just a matter of perspective and that everything would work out okay in the end.)

A man elegantly dressed in a blue top hat and blue velvet pants tames a lion, perhaps in preparation to stick his head inside its mouth. (Yes, that's a lion. I'm not a good artist. We've established this.) Behind them, Lyndsay's cotton candy treats tempt one and all. A giant tub of popcorn, large enough to feed the whole crowd and the circus performers too, waits for someone to drown in its fluffy, buttery goodness.

Anthony's aforementioned contribution is the floating, radiating clown head hovering over the crowd. I think it's supposed to be the Jack-in-the-Box mascot, but it looks like some kind of terrifying mind-control device, no doubt operated by none other than...

...DAVID HASSELHOFF, THE MANIACAL CLOWN!! With this "episode" on the white board, David's time as a recurring character came to an end. (Tracy insisted.) David chose to go out in style, in a clown car no doubt overstuffed with Baywatch babes and rabid German fans.
Posted by Claire (and Nikki) at 4:47 PM