Sorry there's no witty title for this blog entry, but I think the awesomeness of Dinosaur Ridge will hold its own, no special title needed.

As you may recall, Nikki and I had driven away from Commerce City and zig-zagged down the mountain towards wherever the road took us. (There were so many bikers going up and down the mountain. I kept worrying about their safety! What if they got run over?!) Eventually, Nikki realized that rather than take us to Nederland, a tiny town in the mountains and her intended destination, the road was taking us back towards the city into Golden, Colorado. We had resigned ourselves to ending our adventure a little earlier than we had intended, when Nikki saw a sign for Dinosaur Ridge and pulled the quickest, most badass u-turn I've seen outside of a movie. As we pulled into the parking lot, I KNEW this was going to be a great time. Everywhere you looked, there were giant dinosaurs! 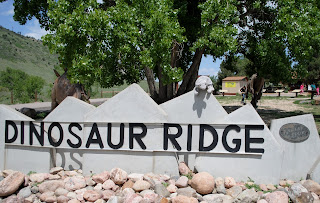 Here's a little bit about the location.

The first dino friend I made was the stegosaurus. He's one of the most easily recognizable dinosaurs because of his spiky tail and the spade-shaped spikes on his back. And look at his beak! Subtle proof that birds evolved from dinosaurs. 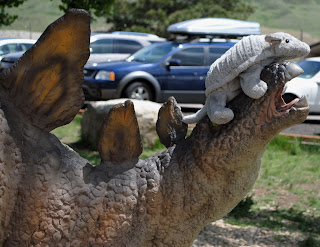 He wasn't very pleased that I was covering up his eyes for this photo! 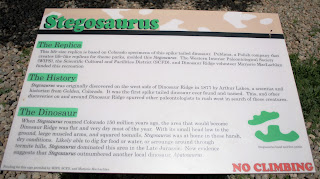 About that "NO CLIMBING" sign...heh.

Look how little he is compared to other dinosaurs! (More on the apatosaurus later)

After Nikki noticed that I wasn't allowed to climb on the dino statues, she wouldn't let me get on the next dinosaur, the iguanodon. (Plus, there was a family taking pictures next to the statue, and she didn't want to ruin their vacation album.) 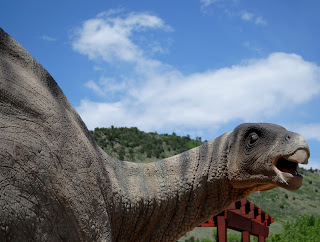 He has a beak-like mouth too! 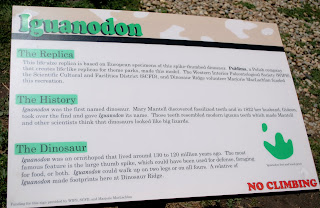 Nikki signed us up for a guided tour of the fossil locations, but we had some time to kill, so we took some silly pictures with some...creative-looking stegosaurs near the visitors center. 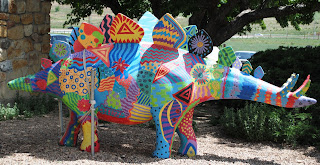 I think this stegosaurus probably followed the Grateful Dead around the country on tour back in the day. 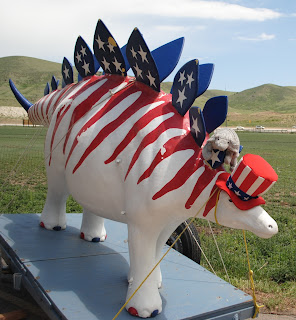 After we finished goofing around, we checked out a few more signs near the visitors center to learn more about Dinosaur Ridge and "the Dinosaur Freeway." 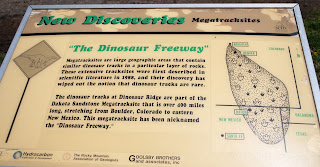 "The Dinosaur Freeway" would be a great classic rock band name. 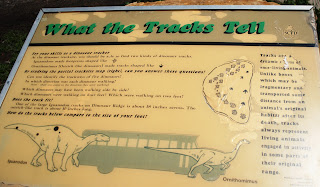 There's our friend the iguanodon again!

Our tour guide, TJ, is an actual paleontologist (fossil scientist) and TOTAL HEARTTHROB. And super smart, etc. He was really knowledgeable and funny and very patient with the cranky toddlers on our bus. First stop: a set of fossils that had been cut in half! 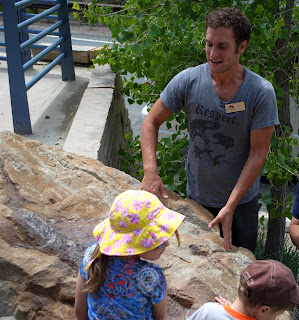 Not shown: his beautiful eyes.

The absolutely coolest, most bizarre thing about Dinosaur Ridge specifically and Colorado in general is that it used to be UNDERWATER. Well, okay, there were shallow seas and beaches, which is much different than "Colorado used to be at the bottom of an ocean," but it's still super-cool. They can tell that Colorado used to be underwater because scientists (and normal people!) have found ancient sea urchin fossils and water ripples in rocks. 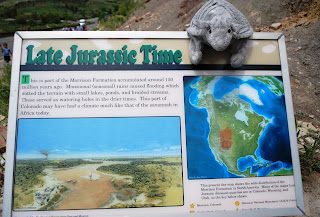 The fossils seen in the picture above and the one below aren't from the same dinosaur...or even the same KIND of dinosaur! These dinos died, and their bones were washed away down river where they eventually settled. During construction on the road that runs along Dinosaur Ridge, construction workers cut this rock in half and discovered these fossils within. 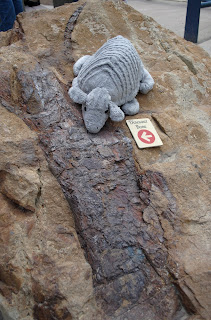 Pretty sure the big one my nose is touching (yeah, I'm touching a fossil; jealous?!) is a stegosaurus leg bone. The curvy one above me is a rib bone, but I can't remember from which dinosaur. (Sorry)

Fun fact: The official state fossil of Colorado is the Stegosaurus stenops. Yes, there are such things as state fossils, and T. "Yeah I'm Sexy AND Smart" J. knew the state fossils of all of his tour group's states. Maryland's state fossil is a snail shell. (Not nearly as cool as a stegosaurus.)

Our next stop on the tour was an overhanging ridge of rocks that, at first glance, didn't seem that interesting. A bunch of orangey, wavy rocks? Pfft. Big deal. Then we learned that we were actually looking at a side view of brontosaurus footprints! 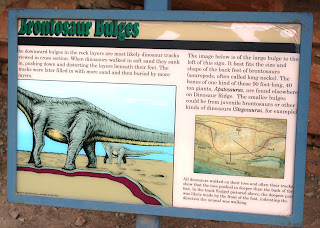 We learned that the long-neck dinosaurs known as "brontosauruses" are actually scientifically known as "apatosauruses"! TJ explained to us that different paleontologists back in the day discovered two different sets of fossils, one big with a long neck, and one small with a long neck, and named them different things. They didn't realize that they had discovered an adult and child apatosaurus until later. He also hypothesized that because The Flintstones used the term "brontosaurus" on their show, people came to know that term much better. 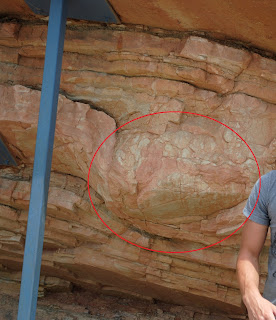 Our final stop on the tour was a part of the ridge COVERED in dinosaur footprints! 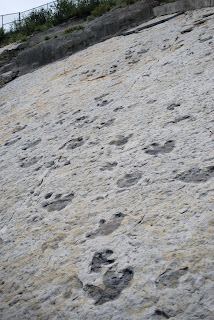 This was a part of the "Dinosaur Freeway" that we learned about above. Now, this part of the freeway was angled sharply up, but the dinos back in the day weren't climbing uphill. This land was flat, but over thousands of years, the mountains pushed these prints up onto the side of a hill. (Yes, I understand that this isn't the scientific explanation of how this happened, but cut me some slack! I'm just an armadillo! If you want to learn real science about plate tectonics and how the Rockies were formed, go to the Denver Museum of Nature and Science or visit Dinosaur Ridge!) 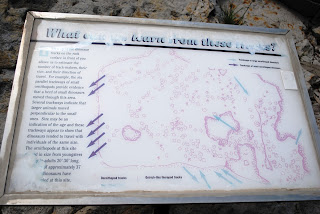 Probably a much more coherent explanation of these prints than I've given. 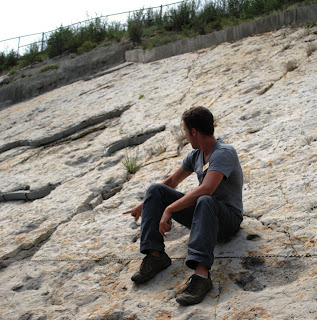 TJ climbed up the hill (which you can do, but only to a certain point so the prints aren't ALL mangled by little kids running up and down them) and pointed out some interesting prints (including one of an ancient crocodile that I couldn't get a good picture of) and telling us how these prints came to be here. The prints are from several different kinds of dinosaurs of all different ages. The kids in our tour group had a lot of fun comparing the sizes of the dinos' feet to theirs. 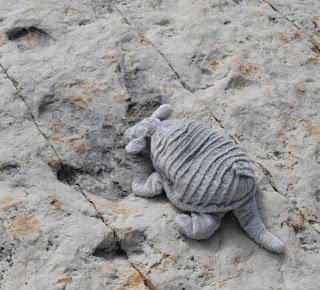 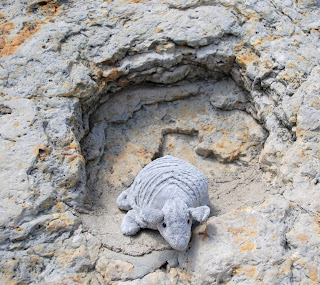 I asked TJ what kind of dinosaur made a print this big and deep, and he told me that it used to be a print like the one in the picture above, but over 50 years ago, Dinosaur Ridge wasn't as well-guarded as it is today, and someone chipped it out and STOLE IT!! Lemme repeat that because it bears repeating: SOMEONE STOLE A DINOSAUR FOOTPRINT!! He said that five decades later, someone discovered that, for all that time, the fossilized footprint had been used as a doorstop for a dorm hall at Colorado State University. A paleontology (I think) student noticed what it was, and after a few years of debating it (!), finally returned the footprint to Dinosaur Ridge. I think they donated it to a museum or something. College kids...OY.

We were heading back to the visitors' center in the "Fordasaurus," as TJ had nicknamed the shuttle bus he was driving us all around in, when he asked if there were any other questions. Nikki, who was just as infatuated with him as I was (Nikki note: I am an engaged woman and am only infatuated with Steve, my fiance.), asked TJ if HE had ever discovered anything, as he was a paleontologist. He said that he had and asked if we wanted to see his discovery. Of course we did, so he pulled over and had us all get out. I was very excited to see what awesome fossil he had found. 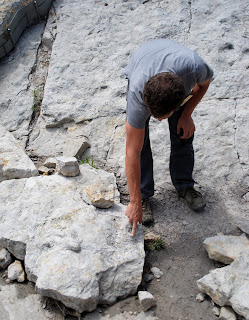 TJ said that he and a friend had been walking around, turning over rocks, when he made an exciting discovery: a footprint! He said that technically he wasn't supposed to be turning over rocks, so he told his bosses that he found it that way. (If his bosses read this, please don't be mad at him!) We were having a hard time seeing the footprint because it just looked like bumps on a rock, so he pointed it out for us a little better. 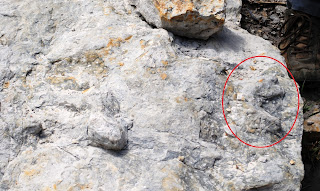 Instead of the footprint being sunken into the rock like the ones on the hill, this one was raised up. (See the inside of the circle.) He was so proud of his discovery! It was really dreamy. :)

Nikki and I left that day swearing that we'd return, as we hadn't seen even half of everything there was to see. We also wanted to bring Steve, who would totally love this place. As we drove off towards home, Nikki asked me if I had had a good weekend, and I said yes. I hope she and I get to have another "mecation" soon!
Posted by Claire (and Nikki) at 8:30 PM