Nikki note: After you're done reading about Claire's adventures in historic Central City, hop on over to my Facebook photography page and see a few pictures that I took that were a little too "artsy" to include here. FB has a new feature where you can view photos in "full screen mode." I highly recommend it.

Sunday was GORGEOUS, the total opposite of Saturday's rainy, gloomy weather. Nikki said she didn't want to spend such a nice day underground. I seconded this plan, so we set off in Becky and just started driving through the mountains. Nikki remembered a place she and Steve had visited on their second vacation to Denver a few years ago. It's a gambling town in the mountains called Central City, right next to another gambling town called Blackhawk. 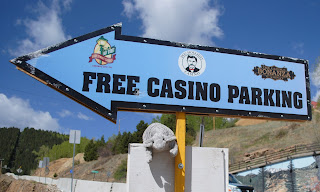 Nikki doesn't like gambling, because she claims she's not lucky, and she's not good at playing card games, but she liked that the two towns were historic towns. The road up to the two towns is steep and super-curvy, so it was an awesome ride. 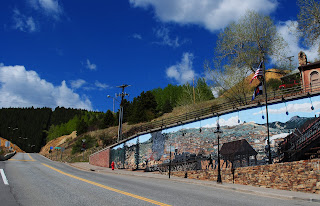 We arrived pretty early, around 9:30 or 10:00 in the morning, and the casinos were already open! We decided just to walk around and check out all the different historical buildings. 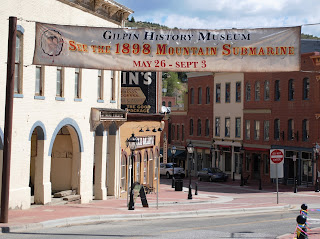 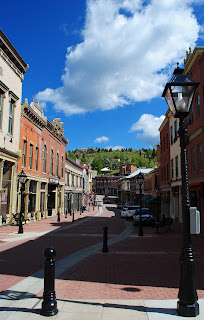 When you first walk towards this main street, they have four plaques posted so you get a little background on the city. 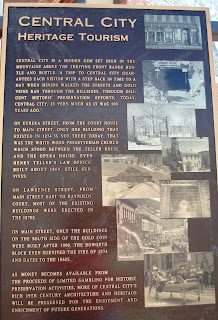 Click on the photo so you can read all the cool history. 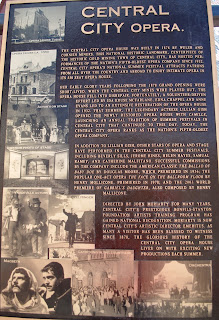 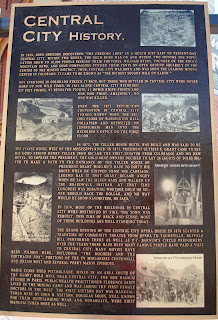 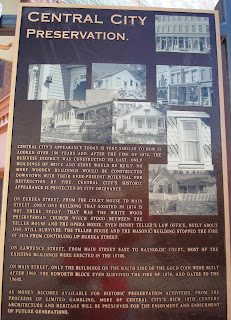 This was one of the more popular casinos. They seemed to sponsor a lot of the buildings, and a lot of people were hanging around inside and outside. 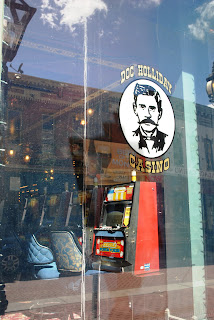 Here's a really old casino with some cool history and antiques! 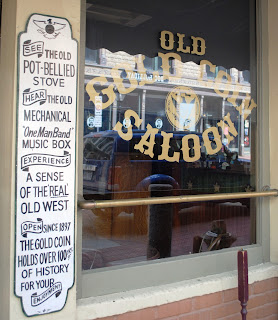 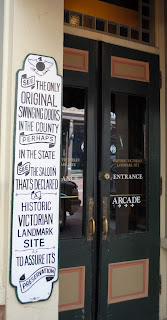 Here's the swinging doors! I wanted to walk through them, Old West style, and have people be all, "Oh no! The Armadillo Kid just came in! She's lookin' for booze and blood!" But Nikki, the killjoy, said that life isn't like the Westerns her dad watches. :( 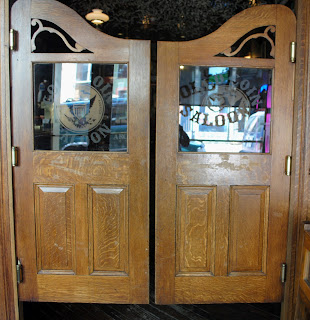 And this is the player piano. I always thought they were kinda creepy...like a ghost is trying to entertain people beyond the grave. The most disappointing thing about this player piano was that it DIDN'T play! What's the point of having it then?! 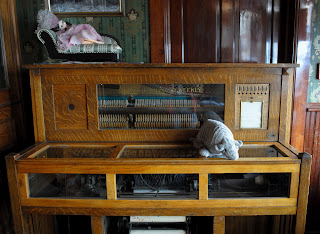 The weirdest part of the bar is the ceiling. Nikki almost missed this photo op, but she was trying to peek over the swinging doors to see if it was a good place to have lunch, and since she's so short, she was able to see the ceiling. I have NO IDEA why people stapled dollar bills up there, but I know that if I had a ladder, I'd be a rich, rich armadillo! 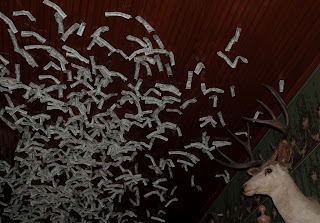 Ok, so this was my favorite part of our tour of the town. It's one of those cool folk legends that I love to hear/read about, and even though it didn't have to do with ghosts or anything, it's still a cool story. I'd just mess up telling it, so I made Nikki take a picture of the two signs explaining what it's all about. 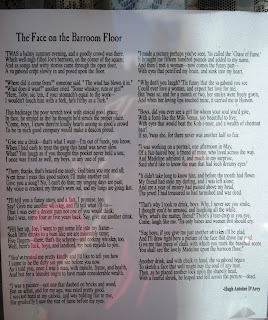 This picture above is the poem that inspired the story below. It's long, but good. (I'm a fan of poetry...little known fact.) 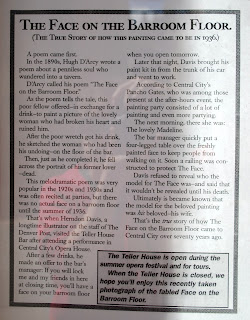 How cool is this?! Guy paints a face on the floor of a barroom! And no one gets mad! I wish I could deface a bar and not get in trouble. ;) 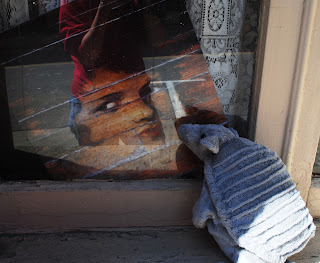 And here's the lady's beautiful face! Too bad *NIKKI* had to ruin the picture by getting her reflection in the way. ;p


Besides the casinos and its rich mining history, Central City is best known for the Central City Opera House, a beautiful historical building. It's the fifth-oldest opera company in the nation, which is pretty awesome, considering how old our country is! It's too bad we couldn't stay and listen to a performance. I've never watched an opera before! 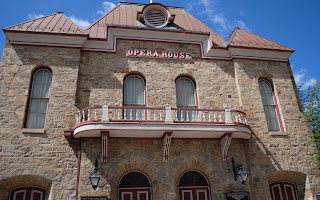 What a beautiful building! So classy looking! 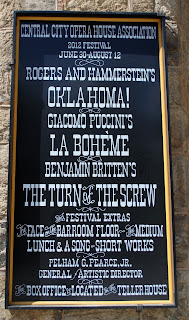 This is the summer 2012 schedule. I BEGGED Nikki to take me to see Oklahoma!, but she said the time she went to Arena Stage in DC to see the play for a class was enough to last her a lifetime. She said either of the other shows would be a better possibility.

Surrounding the back of the opera house is a garden that kinda reminded me of a tree house. There weren't many flowers in the garden, which I didn't get. What kind of garden doesn't have flowers?! We DID see a lot of candy wrappers and cigarette butts. Nikki said that the candy wrappers were probably from audience members hanging out during intermission, and the cigarettes were probably from techies who were annoyed during tech rehearsals. 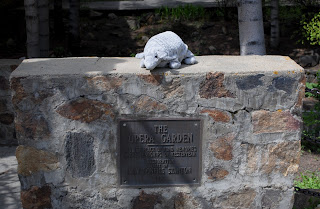 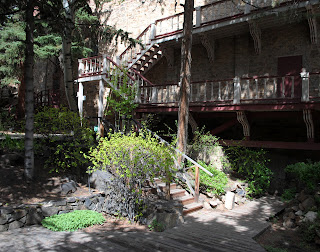 See all the wooden steps and platforms? That's what reminds me of a tree house. 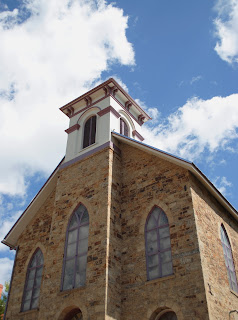 An old church near the Opera House 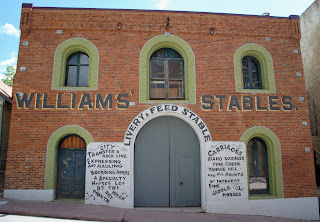 What a cool building!


We ended our trip in Central City at the Visitor Center where we got to learn some fun facts about the town and saw some antiques from the town's mining history. 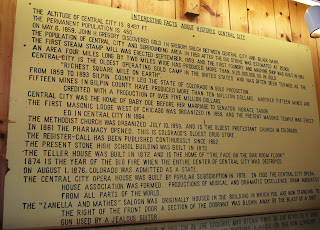 Look how small the population is in Central City! I can't imagine living in a city that small! 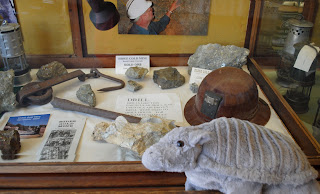 Maybe we didn't get to go visit a mine, but we could still see mining equipment! 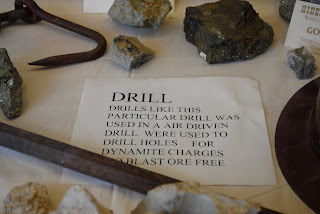 Looks like the Visitor Center could use a proofreader!!

There was a map on the wall where people could put pins on the city where they were from. They had a special map for people from Colorado. It was so neat to see that some people came all the way from Alaska to see the history and gamble in the town! 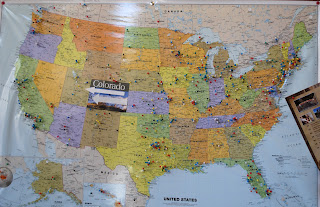 Of course, Nikki and I had to represent Baltimore! While there were some people from Maryland, no one else was from Baltimore! We couldn't let that slide. 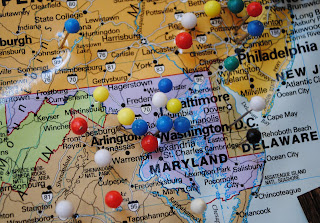