Armadillos in the "News"

Gracious! It's been a long time since I've updated! I wasn't grounded again (although Tasha still pukes occasionally, but she and I have been better about cleaning it up), but Nikki just hasn't been taking me on that many adventures...or going on that many herself. Frankly, she's been whompsy lately, so I told her that we need a "just us" weekend to have some fun and get outside the city. So she's taking us to Idaho Springs tomorrow for a much-needed "me-cation," as she's calling it. She booked a massage and facial at Indian Hot Springs (where she and Steve went on their anniversary in January), and she plans on taking us on a gold mining tour! (I hope they let me go on this one!!) I'm making her take her camera and her laptop with us so she can update on time, instead of putting it off for weeks and weeks and then being all, "Oh, I'm bored. I guess I should update the blog." You're welcome. ;p

As for the armadillo portion of this entry, Nikki found this on a website called "imgur," which is a great way to kill time at work, apparently. She sent the picture to me, as she thought it was very funny. I would like to say that I don't approve of drinking cheap beer; if you're going to drink and get drunk, do it with some good tasting alcohol! But I'm not here to knock anyone's choice of booze; I just want to share a ridiculous armadillo picture. 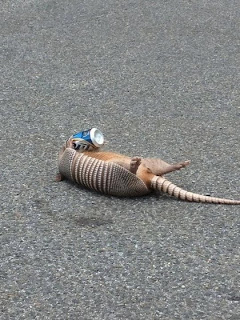