Goin' to the Chapel and They're Gonna Get Mair-air-aired!

In March, we flew back to Baltimore so Nikki could be in her friends' wedding. Jon and Tia were the "couple friends" for Steve and Nikki; they could do double dates, and they always watched football together on Sundays. (Fun fact: when Tia gets really nervous, she obsessively cleans. She once got mad at Nikki for doing the dishes before the game and leaving her nothing to wash!) Jon helped Steve propose to Nikki, and Tia took Nikki to her first bridal show. Besties all the way!

I was so excited to go back to Baltimore, not just because it meant I got to see the family and my friends again, but also because I was going to be flying in an airplane for the first time! Oh man! Nikki put me in a nice purse that Steve's aunt Pam bought for her in Guatemala, and we flew through security. We got an aisle seat in a relatively empty plane (REALLY early in the morning!) and had some room to stretch out and sleep. I was so excited that Nikki had a hard time keeping me from climbing over the guy in the window seat and peering out the ultra-strength plexiglass to see everything that was going on!

Oh God, you guys, ARMADILLOS ARE NOT MEANT TO BE IN THE SKY!!!!!!!! There was turbulence, which was TERRIFYING, and the landing was bumpy (I thought), and Nikki just passed out through the whole thing because she had to take air-sickness medication. She ended up using me as a pillow, which I thought was rather demeaning, but it at least meant that I had something to grip onto as the plane bumped around in the air.

When we landed, I kissed the ground then gargled with strong soap, because....ew. We were staying at Nikki's parents' place, and it was nice to see them again.

There was so much to do to prepare for the wedding that Nikki ended up having to leave me at home for a couple of days. BUT! I got to hang out with her and Tia the day before the big day and do all the girlie things that girls do to get ready for weddings. First stop: the nail salon to get mani-pedis: 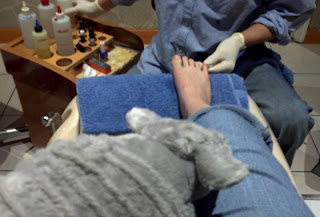 Nikki getting her toenails done. Never realized how gross feet could be! ;D 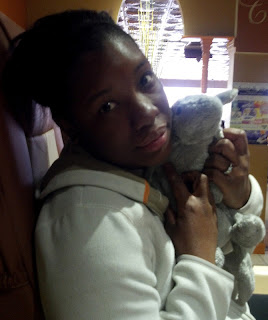 Tia and I snuggling while she gets her pedicure. Isn't she adorable?! 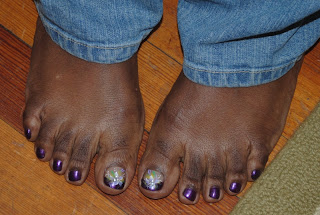 The end result! What a great pedicure! So classy!

After grabbing a quick lunch at a local deli (UTZ CHIPS!!!!), we went to a wig shop so Tia could buy some hair for her wedding day hairdo. As Nikki doesn't ever want long hair, I've never been to a wig shop before, so Tia showed us around and told me all about how you want REAL hair because synthetic hair just melts or something awful when you try to style it.

While I may be fuzzy, I've (obviously) never had hair before, so I thought I'd try out a few styles and see which one I like best. Feel free to comment with your opinion too! 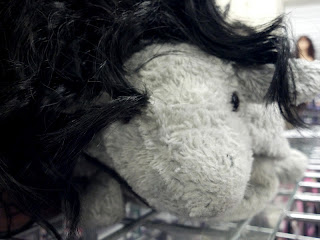 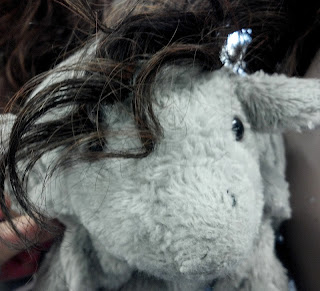 Next up, a curly do with medium-brown hair. A little more "armadillo next door." 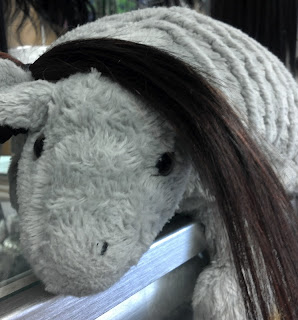 I know Nikki HATES it when people say that straight hair is more glamorous than curly hair, but I think in this instance, it's true! 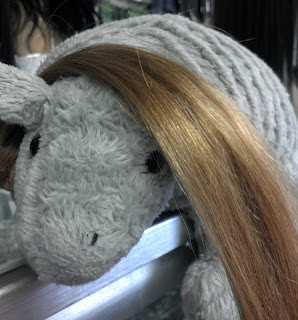 OF COURSE I had to try some blonde locks! What a great "California girl" look!

We went to a hair salon in East Baltimore, where Nikki fell asleep on the couch in the back room, and people were loud and laughing, and the radio was blaring, and I kinda loved it, even though I was TOTALLY out of my element. We ended the day back at Jon and Tia's house, where we got things ready for the big day and ate some pretty delicious pizza.

Finally, the big day arrived! Steve had gotten into town Saturday night, so he carpooled with Nikki and got to the church early to help set up decorations and keep everyone amused. Jon and Tia got married in Chase Court, which is a beautiful, historic building behind a church in Mount Vernon, Baltimore. There was a courtyard and stained glass windows and a giant fireplace. The bridesmaids, mother of the bride, Tia, and I all went to the upstairs loft area to get ready. 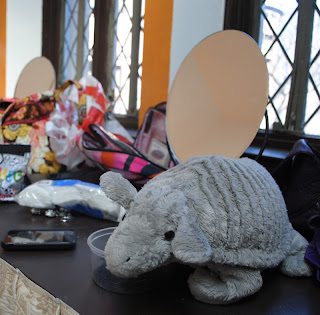 Human girls use so much make-up and hair products!

Because Nikki was in the wedding, she didn't get to take too many photos before or any during the ceremony. But that's okay, because once the reception started, I got to see all my old friends again! 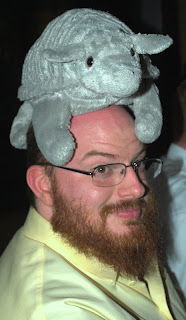 Evan, who we call "Giant," because he's big and red-headed, and it seemed like an appropriate name. 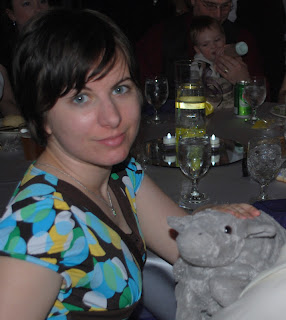 Melissa, an excellent artist who has birds who can speak English and like to say really weird things at weird times. 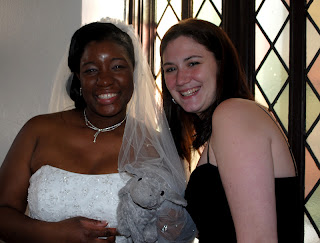 Got a picture with the beautiful bride and Audra 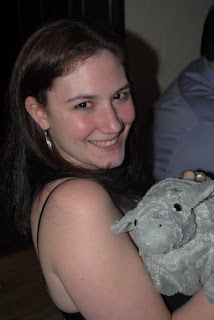 I'm really glad that I got to hang out with Audra at the wedding. I wish we had had more time together, but armadillos LOVE to dance, and Audra kept declining my invitations. ;)

The day finally wound down to an end. Jon and Tia drove off into the sunset in a car that Nikki and Tia's sister Nita decorated with "JUST MARRIED!" and little stick figure drawings of the happy couple. Everyone helped to clean up, and the next day, we got on another plane and flew home. It was a wonderful time, a beautiful ceremony, and a fun experience, as it was also my first wedding. 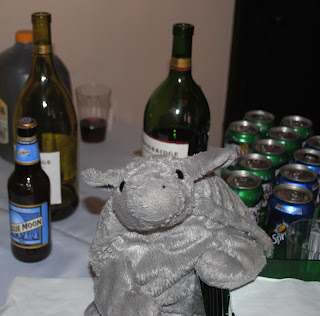