Girls' Weekend in the Mountains, Part One

Nikki's been feeling really blue and stressed out lately, so she decided that she needed to get away from the city and get out of the apartment and take some time to relax by herself, sans Steve. Since she and I haven't gone on any adventures lately, she asked if I'd like to come with her. OF COURSE I said yes! So she made reservations for us at Indian Hot Springs in Idaho Springs, Colorado and booked a hotel room so we could spend the night in the mountains.

We drove up on Saturday, and MAN, the weather was AWFUL! It was pouring rain and cold and grey, and when we started driving up I-70 (slowly, because Nikki's car "Becky" is a hybrid, so only has an actual engine the size of a lawn mower's), this crazy fog sunk down, and you could barely see the car in front of you!! Nikki was playing some soothing mix CD that she called her "Winter Mix," which was totally appropriate, because you'd never know that we were only a few weeks away from summertime. When we got to Idaho Springs, though, the fog had lifted, and even though it was still drizzling/raining, there was a little bit of sun poking out from between the clouds. Sunshiny rain is the weirdest thing, y'all.

Our first stop was the hot spring. Nikki had booked herself a deep-tissue massage, and that came with an hour-long soak in a private bath. She said I'd have to hang out elsewhere (a LOCKER, it turns out!) during her massage, but agreed to let me go to the private bath with her. It was nice and dark and steamy. I dipped a toe in the water and OH MY GOD IT WAS SO HOT!! I mean, I know that hot springs are gonna be hot, but Nikki said that this bath was hotter than the one that she and Steve had when they visited in January. So she'd go in for a few minutes until she couldn't stand it anymore, then come out and lay down on her towel, which she had spread out on this wooden bench next to the bath. She kept doing that the whole hour, while playing soothing music on her phone. I mainly just enjoyed the humidity. 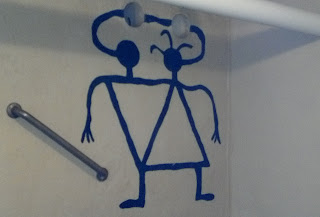 Since I was sent to a locker to "hang out" until Nikki finished her relaxing, I'll let her tell you about the rest of her spa experience.

The deep-tissue massage I had was like a dream. I've been VERY stressed lately (due, mainly, to my anxiety disorder and depression), so having someone just abuse the hell out of my muscles was necessary. The masseuse focused on my shoulders and upper back, and by the time she was done, I was dreamy with calm. I went downstairs to pick up Claire and change before my facial at three, but I wanted to check out the geothermal caves first. I'm so glad that I did!
The caves are single-sex only, and you have to be at least 16 years old to go in. Bathing suits are optional, so I decided to go "au naturale" like most of the women in the caves, and frankly, I'm glad that I did. It made the experience so much more...feminine, I guess. I felt like I was back in ancient Greece or Rome, lounging with water nymphs and naiads in a calm, quiet, steamy place. Obviously, I couldn't take any pictures, so here's one from the website:

The pool above is cut into the rock surrounding it and is divided into three smaller sections (one person per section) by piping that regulates the water temperature. This particular pool was one of the cooler ones. There were two at temperatures I could stand and three that rivaled the searing, boiling heat of my private pool. Many women would float or move around in the water for a while, then either lay on their towels on some benches carved into the rock, or they'd leave the cave area and sit quietly in a dimly-lit lounge area. There were women of all ages - teenagers to an elderly woman (who was wearing a bathing suit). After my massage, my experience in the caves only added to my insane levels of relaxation. I almost didn't want to leave, but I knew that I needed to drink a lot of water, as the hot springs cause dehydration, and I needed to eat something as well. I went back to the locker room, put on my clothes, collected Claire, and reluctantly went back outside into the gloomy drizzle so I could drive into town for lunch.

We went to a small Mexican restaurant and split an okay plate of chicken flautas. We walked around the main street a little, under the comfort of an umbrella, before finally returning to Indian Hot Springs for my facial. This time, I left Claire in the car to nap or read or whatever she wanted, and I went and had a lovely facial. Since moving out to the dryer climate of Denver, I've had a hard time figuring out a good facial cleansing regimen. My skin will be oily in the morning, but then get dry but then oily and UGH! So I had a papaya scrub and a nice mask, and I felt much more fresh-faced when I was finished.

I spent my time in the car reading one of Nikki's books about Calvin & Hobbes, this comic strip she used to read as a kid. It's a pretty good book, but since I haven't really read the comics, it was a little confusing. I listened to some music and skimmed the internet on Nikki's smartphone. Then she came back and we could finally check into our hotel room.

We stayed at the Columbine Inn, where Nikki and Steve stayed on their anniversary weekend in January. It was a nice enough room for an overnight stay, but not as nice as the Comfort Inns we stayed in on our cross-country journey. Our room had two queen beds in it, and so I told Nikki that she could have one, and I'd have one. 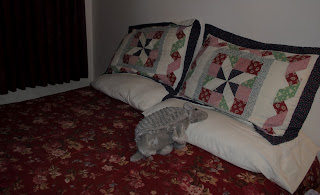 Of course, in the middle of the night, I...I mean...NIKKI...got scared when she heard a weird noise, so I generously offered to sleep with her in her bed. You know...coz she was, like, totally freaked out without me.

Nikki said she was going to go to this Italian restaurant in town that had live music on Saturday nights, but I said I wasn't in the mood for Italian. I told her I was going to stay in and order room service. 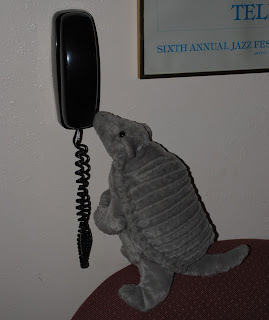 But Nikki said that the hotel DIDN'T HAVE ROOM SERVICE, and I was all, "What the heck kind of hotel doesn't have room service?! Especially since there's a PHONE IN THE ROOM!?" She just said that this was closer to a motel than a hotel, and the phone was probably to call people if you didn't have a cell phone (pfft...like people don't have cell phones these days!) or to call the front desk if there was a problem with your room. So I freshened up, and we went to the Italian place, where I filled up on bread and salad, and Nikki had some gnocchi, which she said is potato pasta. (Weird.) There was a guy playing blues and country tunes on a guitar and an honest-to-God cowboy - hat, boots, bolo tie, and all (!) sitting near us. At one point, he and his wife got up, went to a part of the dining area without tables, and danced to one of the songs. It was SUPER CUTE.

We left not long after the musician was done for the night and turned in early so we could rise and shine and do some exploring on Sunday. (Plus, the TV was broken, there was no wi-fi (OH MY GOD), and Nikki only wanted to watch four episodes of "The Muppet Show" on her computer before she got sleepy.) I was really excited, because we were supposed to go to a gold mine the next day, and since I had to miss the Cave of the Winds, going into a gold mine would be the next best thing.