West Chicago Creek Campground, or Pup in the Wild

[Nikki note: I've added some artistic photos from this trip to the Facebook Fan Page. Check them out!]

You may remember from the filler blog post I made a week or so ago that Nikki, Steve, Eva, and I joined some friends for a camping trip in the mountains. On the suggestion of our friend Mandy, we joined her and two friends, Beth and Dave, at the West Chicago Creek Campgrounds, near Idaho Springs. We arrived on Saturday, and after noshing and chatting a bit, Steve set up our tent. 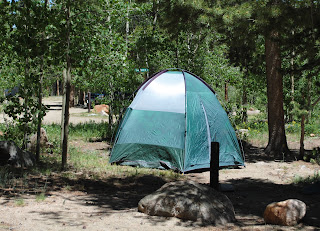 He also blew up the queen-sized air mattress with nothing but his enormous lungs and determination. 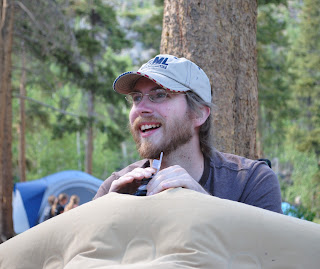 I, however, didn't help set up the tent. Journalistic armadillos such as myself are not meant for manual labor. 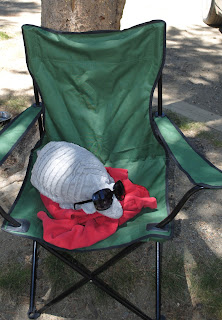 Chillin' like a villain in my balla shades [Nikki note: These are actually MY sunglasses; Claire recently broke them. She's no longer allowed to borrow my things.]

Eva, meanwhile, took some time to get used to her new surroundings, mainly by sniffing things, whimpering, getting her leash caught on tree branches and rocks, and rolling around in the dirt. 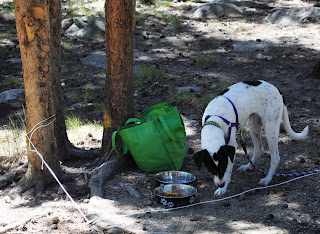 We decided to spend some time taking a hike and checking out the woods around the campsite. The trails weren't always easy to go through, as there had been a big storm a few days before, so a lot of trees had fallen down or lost their branches. Some of the cabins in the area had lost power because of downed lines! I didn't have to worry about any of that though, as I rode in style (as usual). 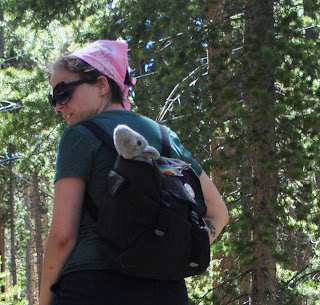 Eva enjoyed the hike, although since Steve is trying to teach her not to pull on the leash, it was slow going, since they had to stop every few minutes so Steve could tell her "no pulling." (She's starting obedience classes soon.) 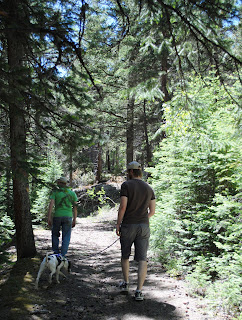 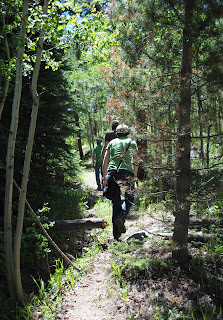 This is the view we happened upon during our hike. How gorgeous, even for a spot that's mostly rocks! 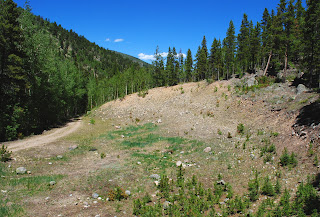 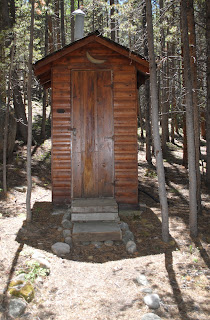 Nikki took this picture for her mom, who has decorated her bathroom with pictures of outhouses.

When we got back to the campsite, everyone started getting things ready for dinner. Eva, however, started doing something strange. She started pushing dirt into her food dish with her nose. We couldn't figure out WHY she was doing this; why would a dog want to eat dirty food? Steve looked it up later and read that dogs bury their food for later when they're in the wild. Instinct is a strong habit to break. Then Eva started digging a hole near the chair where Nikki was sitting. We weren't sure why she was doing that either. 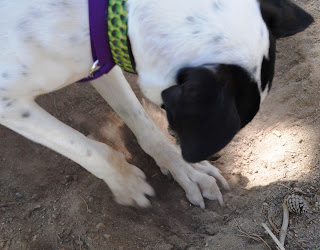 Dogs are so weird.


It turns out, she was digging a hole to lay down in, I guess because the sleeping bag/blanket Mandy donated to Eva wasn't good enough. Again...dogs are weird. She's SUPER CUTE though, so that kinda makes up for her weirdness. 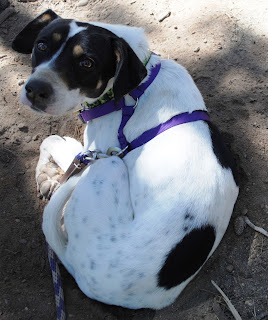 If you don't instinctively saw "Awwww!" then you're a monster.

We had hotdogs and cheeseburgers on the menu, as they're the easiest food to cook over an open fire. (This was before a complete fire ban was put into effect due to the high number of wildfires in Colorado this year.) While Dave cooked me a hotdog, I waited patiently, safely away from the fire, as I'm highly flammable. 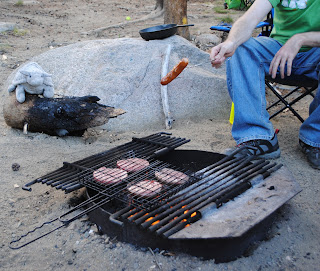 Eva also wanted a hotdog, specifically Dave's hotdog, but Dave was NOT in a sharing mood (valid). 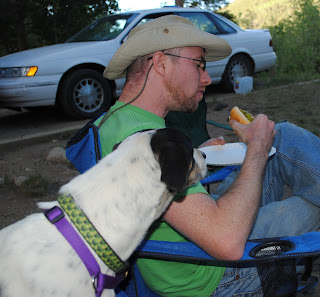 "Hey, I just met you, and this is crazy, but GIVE ME YOUR HOTDOG."

Before we had gotten to the campsite, someone in the group had the "brilliant" idea to soak berries in cheap vodka so they could get drunk off of fruit. Now, I'm usually in favor of booze-soaked fruit, especially if that fruit is in a giant pitcher of sangria, but vodka and I aren't friends. 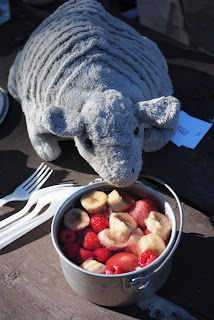 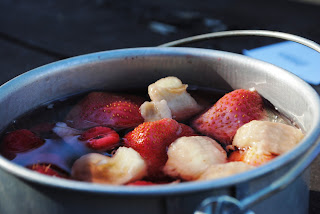 Bask in its booze-soaked glory.

Steve, on the other hand, is a big fan of vodka in its many forms, so he was more eager than I to try the experiment. Mandy was hesitant at first, and her fears were justified. Both she and Nikki ended up spitting the fruit out into the grass, as the vodka had soaked so deeply into the cells of the strawberries and bananas that their DNA was probably permanently changed. 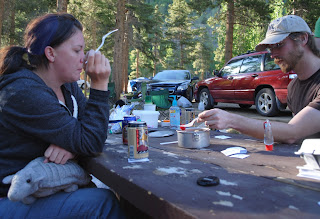 As people picked through the fruit (or avoided it entirely), we played Cards Against Humanity, a card game like Apples to Apples, but for people with really twisted senses of humor. Dave was incredibly good at the game; Nikki was not. [Nikki Note: I'm terribly funny, but I guess others just don't get my sophisticated "humour."] As day turned to night, we built up the fire and put a sweater on Eva so she wouldn't get cold. (She has short hair and is still really skinny.) 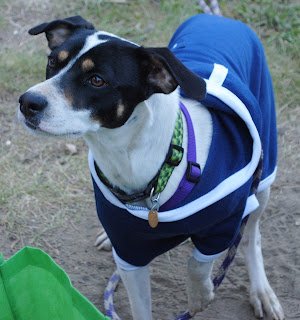 Seriously! How can you look at this dog and NOT fall in love?!

We turned in around ten or eleven, I think, all the while listening to the church youth group/volleyball team play acoustic guitar and play flashlight tag or something until the wee hours of the morning. Nikki wanted to yell at them from the tent, but Steve said that'd be too rude. I had set up the sleeping bag Mandy had donated for Eva on the side of the air mattress, but she was having none of that. She curled up horizontally on the mattress, right between Nikki and Steve. Nikki and I got VERY little sleep that night because we kept almost falling off the mattress! Here, I drew a picture for y'all about how we looked sleeping. 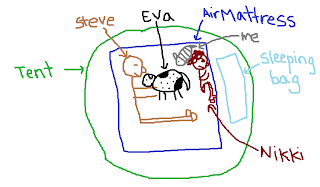 The next morning, Nikki made all of us pancakes and bacon. (Beth didn't eat bacon because she's allergic.) They were SO tasty. She also went to drink a bottle of water and found it woefully full of cheap, berry-flavored vodka. Nothing wakes you up like surprise liquor!

After we finished packing up camp, I made all of us sit for a group picture. Nikki's tripod was missing the piece that connects the camera to the top of the tripod, so she and Beth took turns being the photographer. 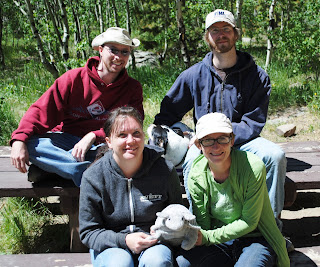 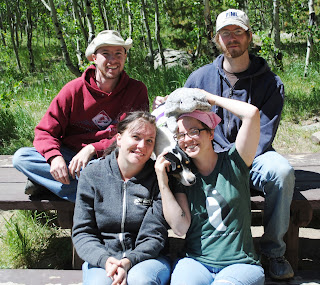 Us again, minus Beth, plus Nikki, and now you can actually see Eva better.

We had a fantastic drive, and Eva really enjoyed bumping along down the windy dirt road from the campsite back to the highway. Even though there's a lot of wildfires this year due to droughts and a really dry winter, there are still a lot of safe places to camp, so we'll (hopefully!) go on more adventures as the summer progresses.
Posted by Claire (and Nikki) at 4:33 PM