Now that we're done having our fabulous Snowventure in Evergreen, let me show you how fun it was so you can be TOTALLY jealous!! 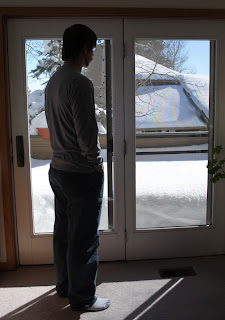 Evergreen got about two feet of snow during the recent blizzard. Using Steve as a yardstick, you can see how much snow his aunt Pam and uncle Rob got on their porch! 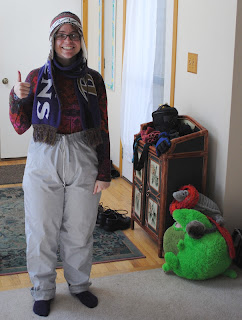 Since it never really snowed that much in Maryland, Nikki and Steve don't own any cold weather gear. As such, Nikki had to borrow Uncle Rob's waterproof ski pants for our sledding adventure. Luckily, T-Rex and I were fine with just ear muffs and a scarf. 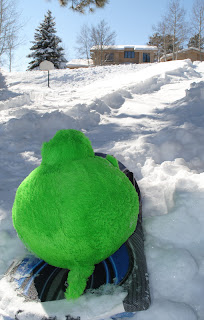 Aw man, T-Rex!! You're facing the wrong way! You'll go down the hill backwards if you're not careful! 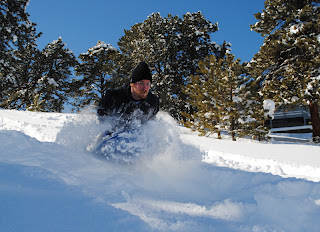 Steve went down the sledding lane with a giant jump in it. Check out the look on his face! 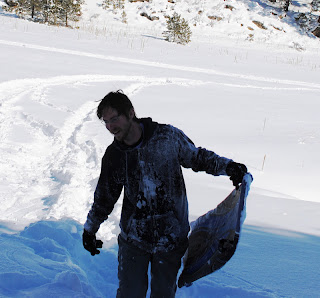 The cold and wet aftermath of getting some sweet air. 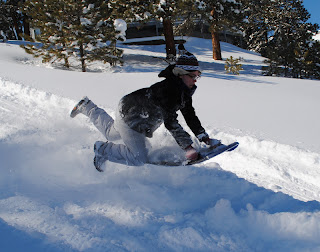 Oh my God! I can NOT stop LAUGHING at this picture!!! Look at the look on her face! Ahahaha!!
[Nikki: I went FLYING down the damn hill but wasn't on the sled properly, so when I hit the jump, I flipped in the air. This is the exact moment I realized that I was going to die. And NO, there wasn't a video of it...thank God.] 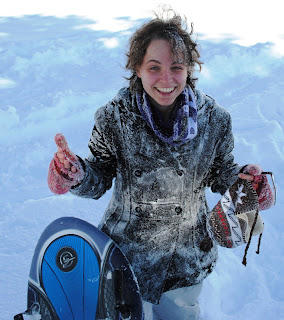 Nikki faceplanted SPECTACULARLY. I mean, seriously, everyone went SILENT because we thought she had broken her neck and was dead. She just lost her glasses and hat and got covered in snow. THIS HAPPENED TWICE. The second time was just as funny as the first. After that run though, she decided just to stick to taking pictures. :p 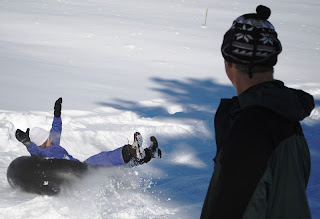 Steve's aunt Pam spent all of her rides down the hill screaming bloody murder and laughing hysterically.
This is a hilarious video of me, T-Rex, and Nikki sledding down the mountain. Getting back up the hill was the hardest part...for Nikki. Neither T-Rex nor I have arms big enough to carry a snow tube back up a hill. ;p 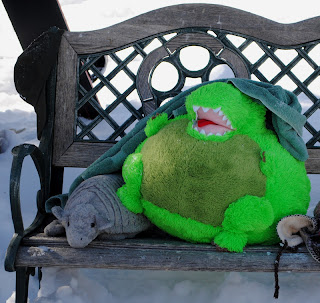 After our trip down the hill, T-Rex and I spent the rest of the day chillin' at the top of the mountain. We saw what happened to Nikki, and even though we don't have any bones to break, he and I didn't want to risk it!
Posted by Claire (and Nikki) at 3:22 PM