On Saturday, Steve, Nikki, and I all went to the Rocky Mountain Reptile Expo north of Denver. Steve's new obsession is snakes, and since Nikki isn't scared of snakes (unlike fish), she's been pretty supportive of his new hobby. 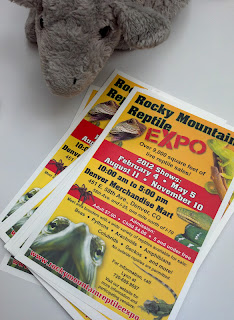 Here are some pictures of me and some scaly creatures! If you suffer from ophidiophobia (fear of snakes), maybe this isn't the blog entry for you. ;p 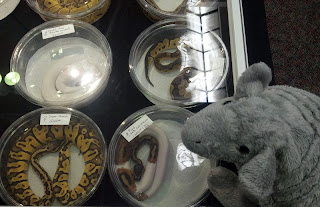 The coolest snakes we saw were the pied pythons, which according to Steve, are a new craze in the snake breeding community. (I'm talking about the one in the container closest to me on the bottom row.) They're a mix of normal snakes and albino snakes, and we even saw one that only had color on its head; the rest of it was pure white! They're CRAZY expensive, and Nikki said they looked too weird, so Steve wasn't allowed to get one. (Also, he prefers boas, for reasons I'll get into later.) 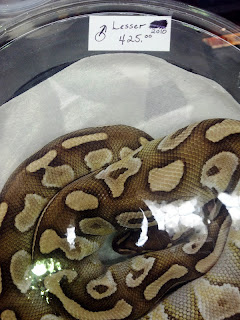 I wonder if the "Least" snakes are cheaper! Hahaha! 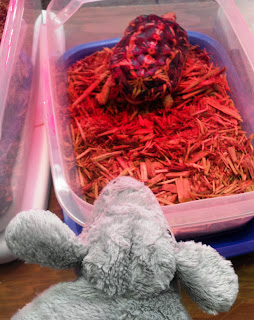 This turtle spent a long time trying to climb out of his Tupperware prison. Poor little guy. 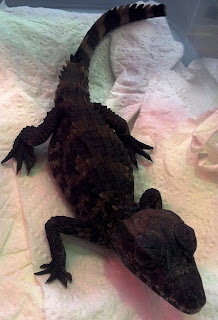 Eeeeeek!! It's a caiman! This crocodile cousin was only a little bigger than Nikki's hand. [Not that I held it. - Nikki] It kinda looks evil though. Why would you want to own an evil pet? Maybe he's just misunderstood... 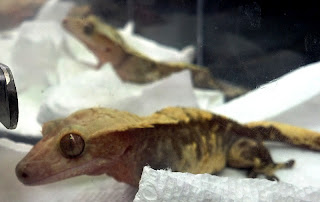 According to Steve, this is "some sort of gecko." (I forgot to write down what kind exactly.) The guy who was selling this little guy told me that he gets people asking him ALL THE TIME if he sells any geckos that look like the Geico spokesreptile. "But real geckos don't walk on two legs or talk in Australian accents," he said. I REALLY hope there aren't humans out there expecting geckos to look like a computer-animated cartoon! 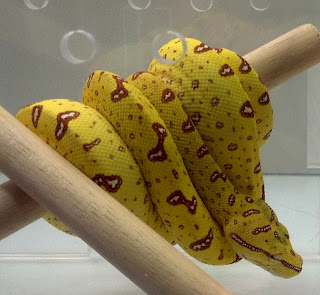 This is a baby Green Tree Python. Steve said that the snakes are born either yellow or red so they blend in with the undergrowth where they live. As they age and move into trees, they turn green to blend in with the leaves. (How cool!) Steve's a big fan of these snakes, but he can't get one because a) they're REALLY expensive (like, $300!!), and b) Nikki (irrationally) dislikes them because she gets this kind of snake confused with the kind that's in The Poisonwood Bible. [Jeez, spoiler alert much, Claire?! I had to edit this so it doesn't ruin the ending for anyone who hasn't read the book yet. By the way, this is one of my top five favorite books of all time. I TOTALLY recommend it! - Nikki] 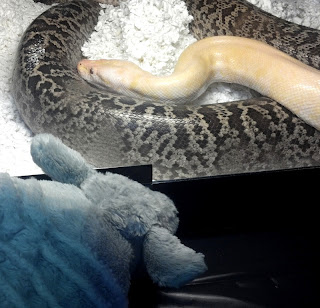 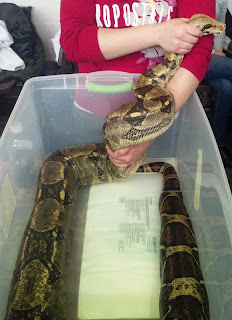 This lady snake used to be someone's pet. The woman holding her told me that the snake ended up being abandoned by her owner in a nasty divorce battle and so was sent to the Rocky Mountain Reptile Rescue. Most of the pythons that end up here are former pets that just got too big for their homes. Steve signed up to be a foster parent for reptiles. If he brings home something this big, I'm pretty sure Tasha and I will riot!! Down with pets that could (and want to!) eat us! 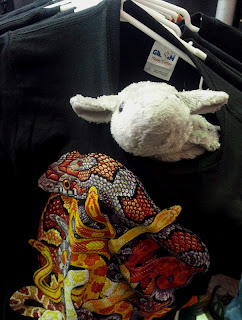 I tried to get Nikki to buy me this BOSS tee-shirt, but she said that they didn't have any in my size. I told her that we could always shrink one! She still said no. :( 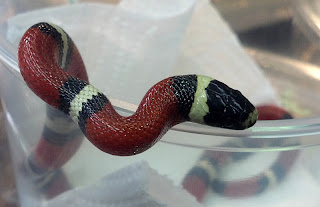 Steve DID make a purchase at the Expo: two Sinaloan Milk Snakes, which Nikki named Cristina and Alejandro (A.J. for short). The picture above is of Cristina, but A.J. looks just like her, so you're not missing out by not having a picture of each. Nikki SWEARS that Cristina's nose is a little pointier than A.J.'s, but I'm not buying it. A.J. is shyer though. They're both TINY, only about three or four months old. Unfortunately, King Snakes (like Lady Josephine) aren't friendly with other snakes, so the milk snakes will never be able to hang out with our original snake pet. But when they're older, I'm pretty sure Steve's going to try to get Cristina and Alejandro to breed (because he's a scientist like that), so it's not like they'll be lonely. ;)