Sorry that Claire's been so insanely bitter the last two posts. I think she's feeling left out of all the excitement. But let me tell you, while I was wandering around in the mostly-dark, trying to keep myself from banging my head against low rock ceilings, I kept feeling VERY happy that I didn't take Claire with me. Trying to juggle her and my lantern (candle inside a sideways bucket) would have just ended in fire and banishment from the caves forever. See....Claire's scared of the dark. Not normal, night-time levels of darkness; she's fine with those. But super-dark spaces, where you're not sure what's up and what's down? Claire's terrified of those. That's why she likes riding in the car instead of being packed away in a suitcase (like my other stuffed animals were). At one point in the tour, our tour guide had us blow out our candles and just be completely in the overwhelming, all consuming darkness. It would have been really great if we weren't on a tour with three idiotic teenage girls who watched waaaaaaaaay too many horror movies and a seven-year-old boy. (More on that later.) God, I could just imagine the screaming Claire would have done and how much worse that moment could have been. So yeah...there's a separate tour where the cave path is lit with electric lights; I'll take Claire on that one...maybe. 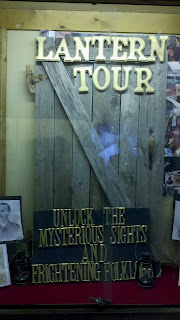 The Lantern Tour at Cave of the Winds is just that: a tour through specific parts of the labyrinth-like caves using only small candles inside buckets for light. The path doesn't actually take you through CotW, however; instead, you travel through Manitou Grand Caverns. They're both connected, but the difference is a matter of ownership. There were some shady land dealings going on back in the day, and that story adds to the "frightening folklore" promised by the tour's display case (above). 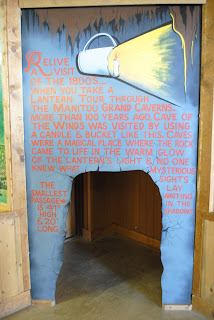 That sign isn't lying - there really were parts of the caves where even *I* had a hard time walking! Poor Steve...he hit his head a couple of times. Our tour guide told us to yell out "Rock is Hard" if we bumped something so the people behind us in the mostly-darkness could be prepared. ...we heard that A LOT. Of course, there were also PLENTY of parts of the caves where the only two people standing upright comfortably were me and the seven-year-old. :P Hooray for being short, I guess...

While in the cave, I took some video to get the different stories out to you, my faithful public. Warning: this is amateur videography on a Droid 2. In a cave. So some parts of the videos will be in darkness, and the ones with light will be jumpy. Since there's really nothing to "see" per se, it might be best to open the videos and listen to the stories while you do other things, like pay your bills or browse Facebook. Maybe check and see how your Fantasy Football team is doing. Fair warning.

Once you enter the caves, you have your photo professionally taken by your tour guide. Steve and I have our photo on the fridge. When his scanner stops being a fartface, I'll scan it in and share it with everyone. :) It's really cute, and totally worth the cost. (Plus, we had a coupon!) The tour guide (total stoner dreamboat that High School Nikki would have dated) told us that there's a few reasons why they take your photo BEFORE going into the caves.
1. It's a nice gift and a good way to make a little extra money.
2. It's an easy way to get a head-count. Count the number of photos/people in the photos against the number of people outside the caves. If the numbers match, hurray! If they don't...
3. They can use the photo to identify you when they have to go back in the caves looking for you. If they don't find you...
4. It's a lovely last gift to your loved ones back home.
(Yes, those are ALL reasons given!) 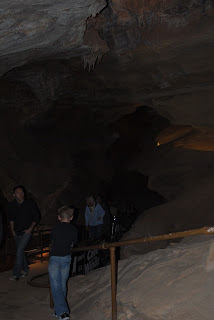 This is the walkway/ramp down to the bottom of the caves area (still in CotW). This area is lit with small electric lights (and my flash, obviously). The small child in the middle of the photo is the aforementioned annoying kid on our tour. I get that you want to do something cool with your family, be a cool parent, take your kid inside a cave, but DAMN! Think about the fact that a) this kid is going to ask every annoying question in the world, whether the tour guide is speaking or has already answered that question or not; and b) that he might be, oh I don't know, REALLY AFRAID OF THE DARK! Kerry, Dan, Steve, and I spent a lot of the tour rolling our eyes in the dark and trying to stifle the urge to swing our lanterns at him. Since this is sort of a "ghost tour," he got all amped up every fifteen minutes if he thought he felt something brush against him. While Dan admitted to poking him in the shoulder fairly often, I bet he wasn't the only other member of the tour to do so. ;p

I filmed this video during our walk from the main part of the caves to "our" part of the caves. Nothing really to listen to, but I wanted to be able to set the scene and let you see how low-hanging the ceilings were.


Entrance to the Caves 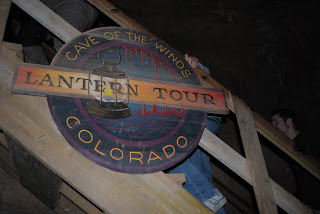 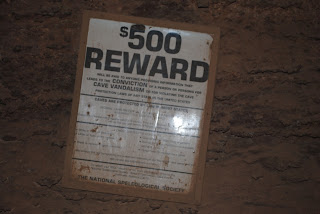 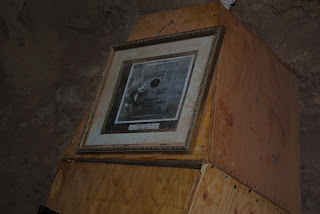 The first photo is to reinforce the law that you should NOT do ANYTHING to harm the cave. If you're falling and need to reach out and grab the wall to stop yourself from hurting yourself, then yeah, it's okay. Otherwise, you're not supposed to put your hands/skin on the cave walls, as the oils can cause long-last damage to the rock. The fine for "vandalizing" the cave is actually much steeper these days. I think the guide said it's something like $1200, and they can take your license?! But yeah. They're not joking around.

The second photo is of the "coffin" of George Snider, the man who thought to bring this awesomeness to the masses. Obviously, there's no body in it, and they just do it for spoooOOOooooOOOOOoky effect. These two pics were taken in the "waiting area" right before we entered the passageway that would lead us into the first "room" of the caverns. Our tour guide (I can't think of his name right now, and it's bugging the hell out of me!) gave us some history of the cavern and gave us our lanterns here. Then he sent us off into the tunnelways to the next big room.

Unfortunately, because I hadn't yet shoved my way to the front of the group, the audio for this first part of the tour is almost inaudible. :( I also can't find any good information online about the land ownership fight between George and his former business partner, so I guess you'll just have to visit the caverns and hear the story for yourself. ;)

This next video is of the first large "room" of the cavern, the Scallop Dome. In this room, our tour guide gives the story of George and his awful first marriage. Main problem: he lived in the caves, while she lived in Manitou Springs. She thought that wasn't very "proper," so they ended up getting an annulment, divorce being uber-taboo in those days.


This is a little video I took while waiting for everyone to catch up to one another. It just shows what our group looked like walking around in the dark with our lanterns.

George was quite the trickster. Some workmen were excavating not too far from his cave and came across a Native American mummy. George bought the money for $5 (a lot back in the day), and inserted it into his mine. He covered it with a sheet and used to bring his tours to that spot to show off his prized possession...

The opera hall! A very large space with lots of different levels of rock formations. As our guide will tell you, old George actually wanted to make this part of the caverns into a performance space. HOW COOL WOULD THAT HAVE BEEN?! I'd totally go see an opera if it were several miles underground in a cave. :)

Speaking of performance places, check out the Great Concert Hall, the largest cave in Colorado! Learn all about cave organs, which is basically one of the coolest concepts I've ever heard of.

This is the last video I was able to film before my phone died. :( It shows a wall of school IDs, business cards, and other random forms of identification that people left behind in the cave as a note that they were there. George used to have his visitors do the same thing back in the day for publicity reasons. (You'll hear what I mean in the video.) Kerry and Dan left their business cards behind. Unfortunately, I didn't have any spare ID cards to leave in the cave...well, I had my college ID, but I really like having that because it makes me giggle.

So there you have it! Your own, grainy, slightly hard-to-hear tour of the Manitou Grand Caverns. If any of you come out to visit, I highly recommend stopping by here!
Posted by Claire (and Nikki) at 8:02 PM