I'ma just throw this out here at the top of the post, and sorry to the people of Colorado Springs if you disagree with me. THERE'S NO GOOD REASON TO GO TO COLORADO SPRINGS, COLORADO. Maybe they were just having an off-day or something, but there was NOTHING going on! A bunch of funny statues, a GREAT view of the mountains, and a really tasty Mexican-fusion restaurant, but that's about it. The streets were dead on a Saturday (!), and too many of the stores were closed forever. I think it was Steve who pointed out that people LIVE in Colorado Springs, but they work and play elsewhere. Since we were only stopping through on our way to/from Manitou Springs and the Cave of the Winds, I guess his point was made for him.

Cave of the Winds is this awesome natural wonder of a cave system. Two little brothers were out in the mountains trying to scare each other silly when they found a cave. They did a little exploring, heard what sounded like ghosts, and freaked out. They told people in town that they found a haunted cave, but adults never believe kids, so they laughed them off. Except one man, who explored the cave, realized it had the potential to become an AWESOME tourist trap, and bought the land to make it an attraction.

Sorry that's not a very detailed description. I only got this story second-hand from Nikki because ONCE AGAIN I wasn't allowed to participate in an awesome attraction! This time, it was Nikki who made the discriminatory call. "I'm going to want to take pictures AND I have to carry this lantern AND I might need to prevent myself from falling down onto sharp rocks. I can't carry you." Pffft. So I got stuck in the hot car AGAIN.

My job in this entry is to show you some silly pictures of me in Colorado Springs. 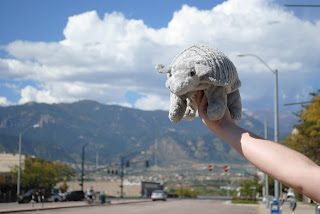 Behold! The beauty and splendor of the mountains, as seen from quiet Colorado Springs, Colorado! 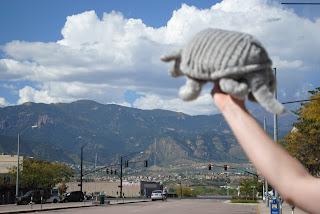 Ooooooooh! Aaaaahhhhh!
(Special thanks to Dan for holding me up.) 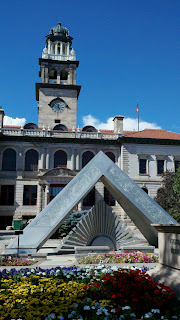 I'm pretty sure this is the Colorado Springs Visitor Center. Or...Pioneer Museum. Or...? 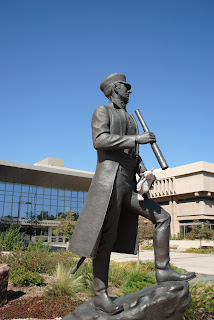 Why, who is this dashing and handsome fellow in whose company I've found myself? 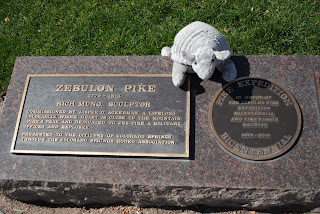 With a name like "Zebulon," you know he got allllll the ladies back in his day. ;) 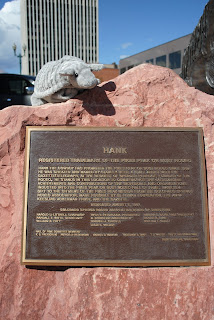 While I've always been a sucker for men in uniform like Zeb, there's just something about the ruggedness and manliness of a cowboy. Enter Hank, every cowgirl's dream. (And every armadillogirl's dream too!) 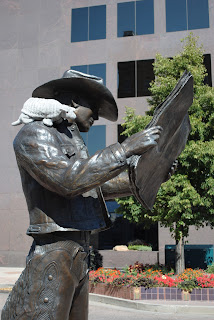 Look at his strong hands, his confident, laid-back stance...he's so hot! Literally! It was, like, 85-degrees that day in the sun, and my man Hank is made out of metal! Scorched! 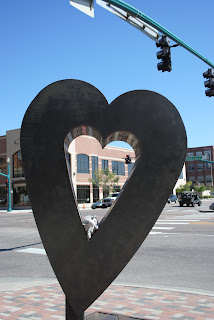 This is a literal, artistic interpretation of how big my love for Hank is.
Just joking! It's this statue: 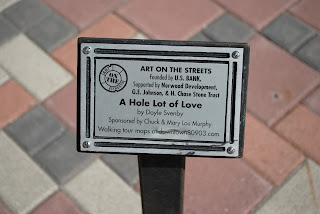 And now, some art that doesn't make sense: 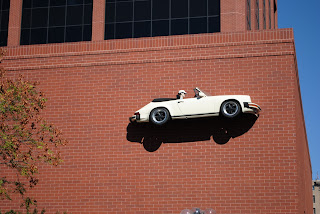 That's, like, Hampden-level crazy right there. I half expected a giant, metal flamingo and a Christmas tree made of hubcaps to be around the corner! (Sick Baltimore-in-joke!) 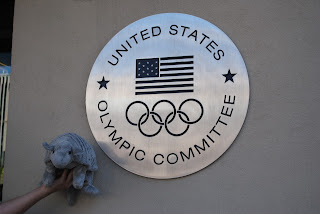 Probably the coolest thing in Colorado Springs. I wanted to take a peek inside, but apparently, no one had time to humor a stuffed armadillo. >:P
(Thanks again to Dan for the help.)

Right before we left Colorado Springs to go to the caves, I made a "friend": 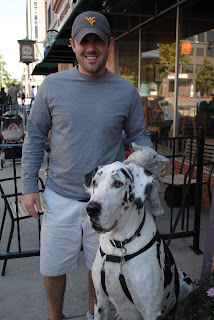 I was utterly convinced that she was going to eat me, and when Nikki asked her owners if we could take a picture together, I was thisclose to smacking the camera out of her hands and running away! But luckily, the pooch's owners had some cheese and apple bites off-camera to keep her drooling maw away from me, so we took the picture, and then I bolted back to the safety of the car.
Posted by Claire (and Nikki) at 2:43 PM