What Claire said is true: the grizzled "cowJERKS" who ran the stables were pretty rude to her and to me about letting Claire take a ride. They didn't see the joke in it, even when I explained the purpose of this blog. They also weren't very supportive when I had a minor freak out on my horse. Some little girl gets scared of her horse, and everyone's being soooo nice to her, but when a 28-year-old explains that her horse is biting others and doing what he wants because she's NEVER BEEN ON A HORSE BEFORE AND IS, FRANKLY, KINDA FREAKED OUT, everyone is just gruff and cranky at her.

Despite my mistrust of horses (they're large man-eaters), I've always wanted to ride one, ever since I was a Girl Scout and was lied to at camp. They said if we were good, we'd go horseback riding; well that never happened. That was the first disappointment that led to my disillusionment with the Girl Scouts. The fact that I also wasn't allowed to learn to shoot guns and bows and arrows like my brother in Boy Scouts and learn how to make ridiculously large bonfires (like James in Boy Scouts) or even learn how to use a real Swiss Army knife (you guessed it...like the Boy Scouts) was just too much for my tomboyish heart to take. Wait...how did I get here? Oh yes, horses. 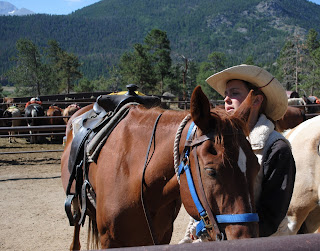 My horse's name was Buster Brown, and he was a right...the word I'd use isn't appropriate for this all-ages blog, but just know that we didn't get along immediately. He chilled out (more or less) on the trail though. All he had to do was follow the horse in front of him and not throw me off onto some cacti or anything. He did that pretty well. He also wasn't supposed to eat anything growing around the trail, but sometimes he was tempted. When our horses went for a snack, we were supposed to use the reins to jerk their heads back quickly to stop them from eating. While almost everyone on the tour (not the guides, obviously) had to struggle a little to get the giant, recalcitrant horse heads to move away from the wildflowers, the small children had the hardest time, what with their lack of strength. They also had a hard time kicking the horses in the sides to make them move, which held up the tour occasionally. 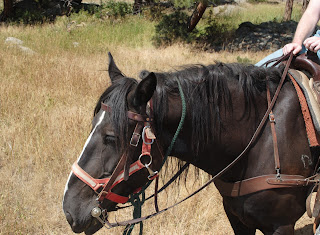 Steve's horse was AJ, a pretty big mare (not that I know how big a mare should be). She walked behind Buster Brown (or "Busta Bust," as I would occasionally call him) and generally seemed ok with her lot in life. 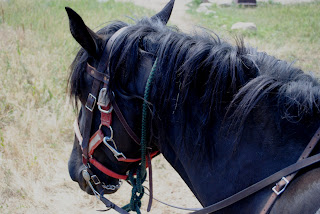 This was taken towards the end of the tour, when AJ decided she was sick to death of waiting in line behind me and Buster and just started walking forward, ignoring Steve's tugging on her reins to get her to stop. She wanted to go home. I don't blame her; being forced to walk up hills and over rocks and through plains of delicious grasses that I'm not allowed to eat would make me cranky too. 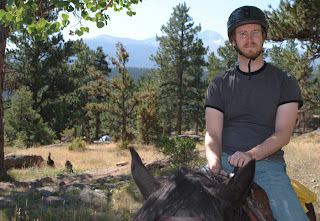 Steve on AJ during the tour

Unfortunately, I wasn't able to take pictures during the tour. There was some pretty tricky terrain, and if any of the guides caught you without your hands in the proper places (on the reins and on the saddle horn), they'd get cranky...even though we all signed liability forms before riding. Feh. There WERE times when the group stopped for one reason or another, so I was able to snap the picture of Steve above. 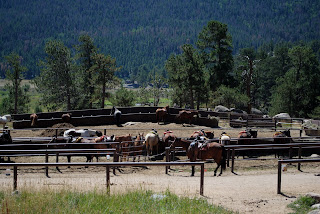 The Moraine Park Stables are the only horse stables and horse tour in Rocky Mountain National Park proper. The tour was two hours long and wound through some really beautiful countryside. However, two hours is a REALLY LONG TIME to be on a horse if you're not bowlegged (like certain fiances of mine). My knees hurt SO BADLY when we were done. Steve had a different problem; while he's naturally bowlegged, his hips don't really open up that wide, so at the end of our two-hour tour, he was sore too. Still, I think it was worth it overall. I have no more desire to ride a horse, unless it was a really cool occasion, like down the Grand Canyon or something. However, it's nice that I was able to accomplish something on my Colorado Bucket List. 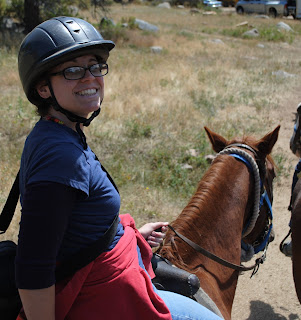 A regular Lady Godiva...with clothes on, of course. 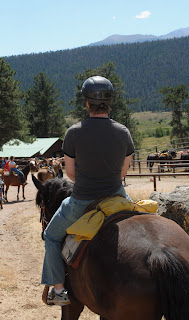 My sexy cowboy, waiting to take his horse back to the stable. 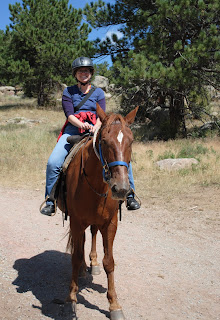