In Which We Go Camping, Avoid Bears, and I *DON'T* Get to Ride a Horse!

So remember long ago when I said that we went camping for one day in the Rockies? Well, Nikki FINALLY finished editing the photos for me, so now I can finally make a post about that weekend! Honestly, she can only use the "but I work all day and have grad school homework and I'm trying to get a social life here" excuse so many times before I just stop hearing her talk anymore. :P

Steve, Nikki, and I left Labor Day Weekend Friday to make the drive up to Glacier Basin Campground in Rocky Mountain National Park. It's a high-altitude park, and there have been BEAR SIGHTINGS there recently, so I was terrified. Nikki tried to pretend that she was cool with the whole "we might run into a bear...literally" thing, but she soon showed her true colors. (More on that later.)

Our drive to the Rockies took us through Estes Park, Colorado, a small town up in the mountains that's full of little restaurants and cafes and clothing stores and skiing places and TOURISTS. We stopped at a sports bar for dinner and ate outside on the patio, which overlooked a river. 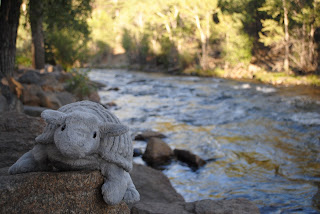 I love this picture of me! I think I'm going to make it my new profile picture. Everyone keeps mistaking me for the cat because of the one I have now of the two of us. :P 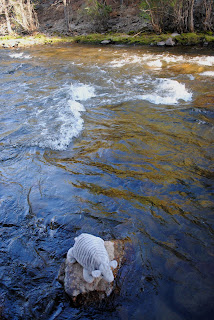 Nikki abandoned me on this tiny rock in the middle of the rushing rapids of this river! (Luckily, armadillos are EXCELLENT swimmers!)

Thanks to a poor bit of navigation on Nikki's part, we didn't get to the campground until after dark. When we pulled up to the ranger station to check in, Nikki was freaking out about the "bear situation." She had a pamphlet we had gotten at the FIRST campground we drove to and was reading about how to avoid bear attacks. When the old ranger lady started grilling Nikki and Steve about camping in "Bear Country," Nikki blurted out, "THERE AREN'T ANY BEARS IN OUR TRUNK" which confused the hell out of the ranger and Steve but just had me cracking up! Turns out, Nikki had been reading about how you have to put all your food in the trunk of your car because bears have figured out how to bust open windows. You're also not supposed to wear to bed the same clothes you cooked in because bears can smell the food on your clothes and then burst into your tent and try to eat you!! 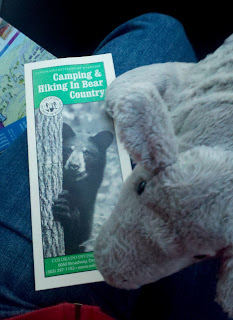 Follow the link for some other tips on how Not to Get Eaten by Bears While Camping.

Steve and Nikki set up the tent while I took first shift on Bear Watch. Really, Nikki had nothing to be worried about; our part of the campground was a wide open space surrounded by other campers in tents and, on the periphery, campers in RVs. There were some trees/woods, yeah, but nothing thick enough for a bear to hide in. Frankly, I was a little disappointed.

Finally, after a lot of bickering and "Why are you mad at me, I don't know how to set up a damn tent"s, our home for the night was finished! Here, let me give you the tour... 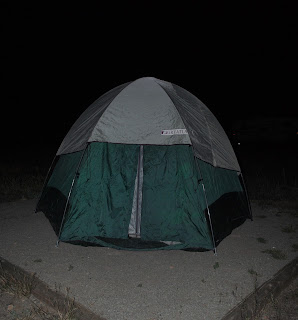 This is the outside of the tent. I know it looks small, but Steve can almost stand upright in it (if he's standing in the middle), and he's a little over 6' tall. So really, it's perfect for me and Nikki. 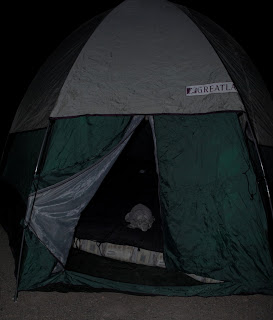 And this is me, inside the tent. I'm on the air mattress that Nikki and Steve brought with them because they're pansies who don't want to sleep on the cold hard ground. ;) 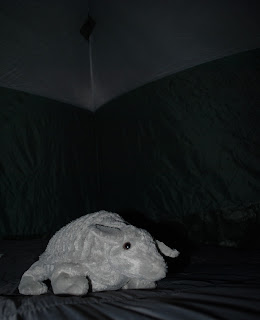 And this is me INSIDE the tent. See how little I am in there?


Nikki's set-up for the bed was pretty ingenious. Because an air mattress traps all the cold air and makes you FREEZE when you sleep on it, Nikki had one of the sleeping bags cover the mattress, with the flannel part facing up. Then she had a sheet on top of the sleeping bag, and then ANOTHER sleeping bag on top of the sheet, this time with the flannel facing down. To bring the overkill full circle, Nikki put their comforter on top of everything. I thought she was being a little melodramatic. I mean, it wasn't THAT COLD yet... 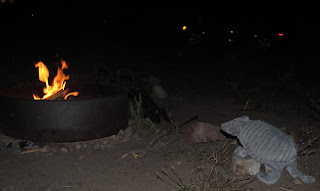 As the night went on, I became more and more thankful that Steve knows how to build a campfire. It was cold as all get-out up there in the Rockies!! I mean, down in Denver, it had been in the 80s all week; nice, warm, armadillo weather. But in the mountains at night, that's a whole other story. Nikki bundled into her giant Loyola hoodie and kept walking around shivering and muttering to herself dramatically. But even Steve started getting really cold! He put on long pants and stood ridiculously close to the fire. He didn't even want to snuggle, for fear of giving up his warmth, I guess. I finally just said, "Let's call it a night," and we all huddled under Nikki's brilliant layers of blankets and warmth. She snuggled me HARD that night, curled tightly into a ball like an armadillo.

The next morning, the sun was shining brightly, and the sky was blueblueBLUE! It was still really chilly though, so Nikki stayed in her hoodie...and *I* stayed under the covers! At least until Nikki made me come outside to keep her company while she and Steve made breakfast. 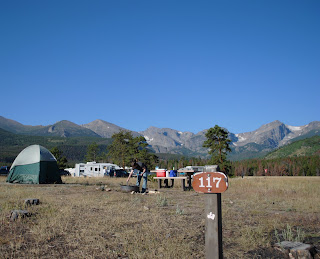 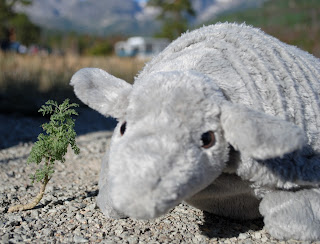 Look at this tiny tree! I am a giantess next to it! This stately evergreen could easily become my breakfast! Muahahahaha! 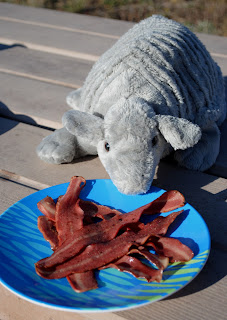 TURKEY BACON!! Not as good as pig bacon, but significantly better for you. We also had cereal, and Steve had scrambled eggs.

...That frying pan is STILL burned to a crisp on the bottom, and it's been washed TWICE! Nikki says it's not a big deal since it was a hand-me-down, and it still works fine.

After breakfast, we packed up and got ready to go to the next spot. We had quite a bit of time before we could check in at the next campground, about an hour or so away, so Nikki suggested we all go horseback riding through the Rockies while we waited.

I've only ever seen pictures of horses or seen them from a distance when we were driving through The Nothingness of the Mid-West, and now I was going to have a chance to RIDE ONE?!?!

When we got to the stables, the grizzle old cowJERKS kept calling me a "teddy bear" and said that Nikki couldn't bring me on a horse, not even just for a PICTURE!!!! I kept yelling at them that I was an ARMADILLO, and NOT a "teddy bear" (UGH), but they wouldn't have any of it. The cowJERKS made Nikki return me to the car while she and Steve rode horses for two long, boring hours. (Boring for me, anyway.) So it's up to her to tell you about her *greeeeeaaaat* adventure riding a stupid horse in the Rockies. She's telling me it's time to go to bed now though, so I guess she'll write about it later.