An Armadillo on the Prairie

Since July, Nikki has been volunteering every few Saturdays at the Plains Conservation Center in Aurora, a city/suburb southeast of Denver. She wanted to meet more people and become more active in her community, so while looking for cool volunteer opportunities in her area, she stumbled upon this place. You should TOTALLY visit their website and read all about what they do and who they are. It's pretty awesome. Also, read this article from the Denver Post to see what someone who's a little less biased thinks about the PCC. (Note, it's from 2011, so a lot's changed since then. Also note: the author incorrectly called the animals in West Bijou "buffalo." See below for why that's awful.)

The PCC (as she calls it) is a non-profit organization dedicated to preserving prairie lands, which used to be what Denver and the areas that AREN'T mountains all used to be. You know the book Little House on the Prairie? Well, it turns out that that book is really historically accurate and tells it like it is as far as what life for homesteaders was like. (In September, I'm hoping to visit the replica homestead the PCC has on their property so I can show you how cool it is!) Turns out, a lot of prairie lands have been sold to developers and turned into housing complexes (especially the lands near Buckley Air Force Base, which by the way, is where President Obama lands when he visits Colorado) or roads or cities or strip malls. This is super sad, because there are a ton of animals that call the prairie home, and if they can't live on the prairie, well...where CAN they live? It's not like anyone wants rattlesnakes staying overnight with them!

Nikki raved about this place so much that I decided to tag along one day when she was volunteering at the Visitors Center. I learned SO MUCH about the prairie that day! 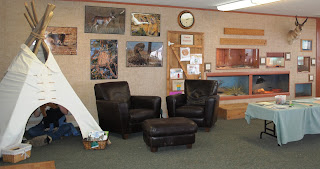 This is the left side of the Visitors Center when you walk in the front door. 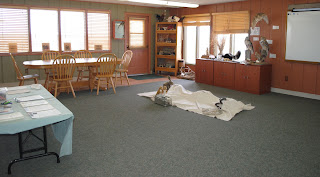 This is the right side of the Visitors Center when you walk in the front door. 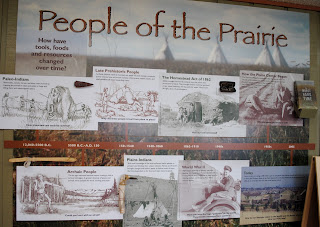 This sign above is really cool, in my opinion. It's a timeline of the prairie and the people who made the prairie their home. One of the people who works at the PCC said that the book in the right-hand corner (The Worst Hard Time) is one of the best books to read to learn about the Dust Bowl and that whole, unfortunate time in American history. 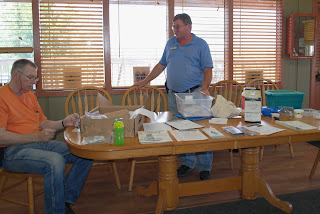 On the day I visited, the head volunteers (Audie is in the blue. He's REALLY enthusiastic and energetic. Lee is in the orange. He's much calmer and a good balance to Audie.) were getting ready for the next day's day camp activities. The kids were going to participate in a murder mystery (!) where, at the end of the trail, they'd find a PRONGHORN SKULL AND SPINE (!!), which the staff have named "Percy." (Nikki told me she's seen it before, and her first reaction was "EW EW EW!") We were trying to get all the clue cards and journals and supplies in order before the big day.

One of the things we needed to do was use plaster of Paris to make molds for animal tracks. No one was really sure how to do it, though, so Audie and Nikki experimented a bit while Lee read directions. Their first attempt turned out really nicely...once Lee dug it out of the dried plaster with his knife! 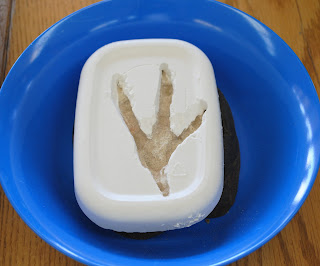 It's a turkey foot!

Eventually, Audie figured out how to make the tracks more efficiently, so Nikki and I went back to taking pictures and talking with the visitors who stopped by to explore. So many of them lived near the PCC but had never really known it was there! So we showed them around the visitors center, gave them a map of the grounds, and gave them a calendar of summer events so they would know what cool stuff was going on.

Allow me to give you a tour! 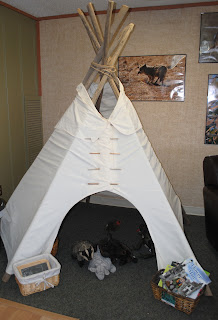 Me in our mini replica Cheyenne teepee! I'm just hanging out with some cool, new friends who live on the prairie. 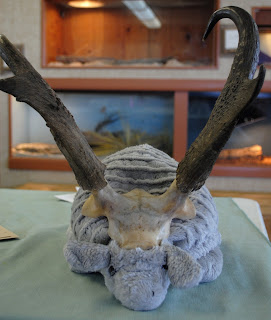 
Fun fact about pronghorns: unlike deer, pronghorns have "horns" NOT "antlers." Pronghorns have these bony protrusions coming out of their skulls, and the horn grows on top of that. (From the website linked in the last sentence:) "Pronghorn have branched, hollow, hairlike horns that are shed annually. They are the only animal with this combination" 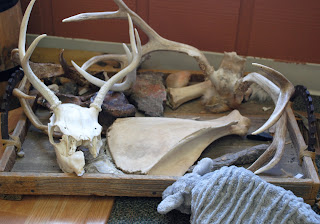 The PCC is all about displaying various pieces/bodies of dead things. (*sigh* Nikki Note: They're for educational purposes, as it's much easier to learn about an animal when it's just pieces or stuffed than when it's charging at you maliciously.) They have whole collections of antlers, horns, skulls, feathers, scat (POOP!!), and fur for people to look at and play with. (You obviously don't play with the poop. Ew.) 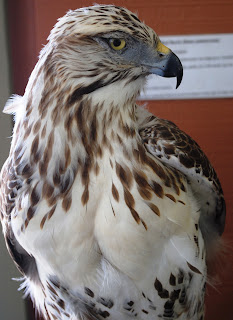 Another dead thing at the Visitors Center. It's a hawk. Nikki wanted me to include this picture because she thinks it's really pretty. (Click on the picture to see it full-sized.) 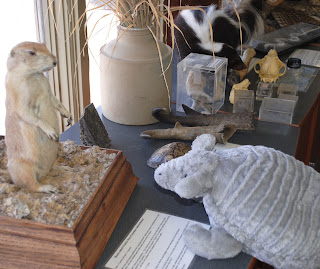 Staring down a prairie dog


Never having lived on a prairie before, the only prairie dogs I've ever seen have been in zoos. I never realized how many could live in one area until I visited the PCC! Oh my gosh! They're everywhere! On the drive onto the property, we passed probably a hundred prairie dogs (Nikki Note: This is an exaggeration, although there ARE a lot of prairie dogs along the driveway towards the Visitors Center.), and they were all running around and "barking" at us. So weird. Learn more about prairie dogs here: Prairie Dog Coalition. MY favorite fact about prairie dogs that I learned at PCC is that their burrows are more like condominiums than holes in the ground! They have "kitchens" and "bathrooms" and "bedrooms" and "living rooms," and they keep their prairie dog condos really clean. If they ditch a room, sometimes someone else will move in..... 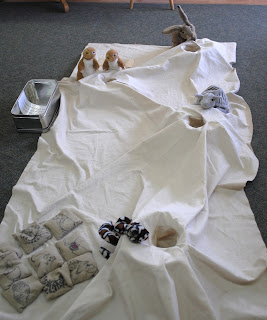 One of these animals does NOT live in a prairie dog burrow. Can you guess which one? ;)

The beanbags above were part of a cool game the Center had set up for kids (and parents!) to help kids learn what other kinds of animals could live in a prairie dog's home. I don't know that the younger kids really got the message, but they sure had fun throwing the beanbags!


In addition to all the dead things that the PCC has in the Visitors Center, it also has some LIVING things too! They've got a rattlesnake, a bull snake, a hognose snake (too shy for a photo), two box turtles (also too shy for a photo), and a salamander (the state amphibian!). 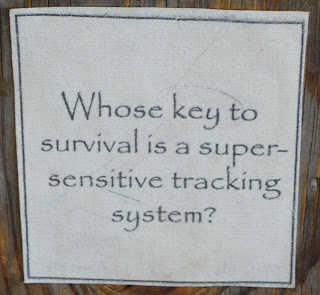 Lift up the flap to see the answer! 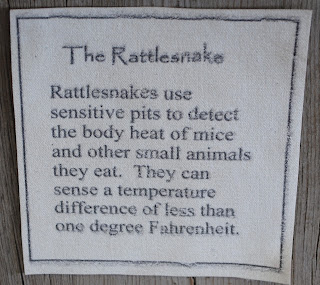 The PCC's rattlesnake has (what I think is) a funny origin story: a man came into the Visitors Center holding a shoebox with air holes poked in it and duct tape securely fastened so the lid wouldn't fall off the box. He asked an employee if they'd take in a rattlesnake. The PCC person agreed, but fairly alarmed, asked WHERE he had gotten a rattlesnake and HOW it had gotten in the shoe box! The man said that he went into his young son's room and under the bed, he found a shoe box. Opening it up...he saw the rattlesnake! How the little kid captured something that can kill you with one bite (or at least TOTALLY ruin your day) is beyond me and everyone else who works there. 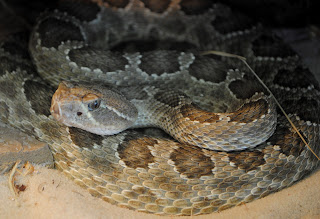 Okay, so maybe I'm just sensitive because I'm usually a prey animal in situations like this, but dude just looks EVIL. Look at those eyes! He looks like he's gonna eat me! (Nikki Note: The rattlesnake is in a secure tank and cannot eat anyone visiting the Center.) 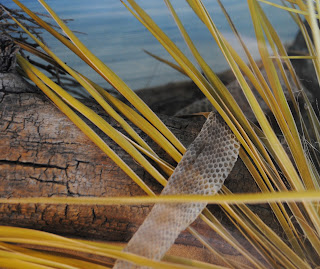 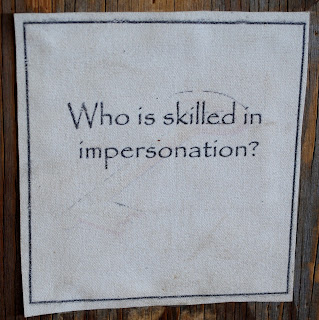 Wonder who it could be?! (Other than Nikki, who is an actress.) 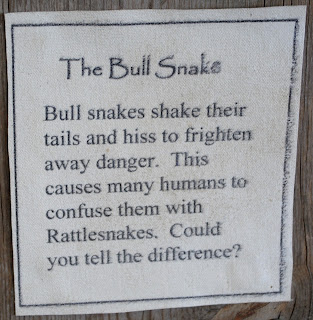 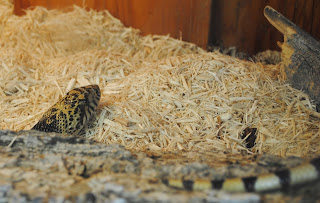 Now, I know this isn't the greatest angle, but seriously...this dude doesn't look ANYTHING like a rattlesnake! For one, he's not evil-looking. BUT! He DOES eat hawks (well, in the wild he would), so that's pretty badass.

My favorite thing in the Visitors Center is DEFINITELY the bison head they have mounted on the right-side wall: 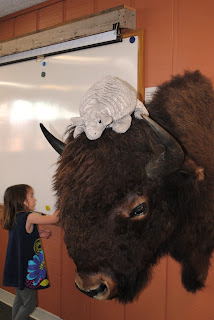 I know it's a "dead thing," technically, and I was all "ew, dead things" earlier, but he's so fuzzy!

One thing the PCC people are really particular about is NOT calling the bison a "buffalo." They look totally different and don't even live in the same place!! Bison are in America and Europe; buffalo are in Asia and Africa. In my humble armadillo opinion, bison are way cuter anyway. The PCC's new property on West Bijou Creek (which you can only visit during scheduled times) has its own herd of bison that will actually come up to you and feed out of your hand! I'm hoping that we get a chance to visit it soon. In the meantime, check out these photos (click "older" to see more pics) from the Denver Museum of Nature and Science of a group that got to visit the property and check out the K/T boundary. (Follow-up to the article about the K/T boundary. I'll have to ask Steve more about it, as both of the articles are old.)

Lastly, the PCC Visitors Center is home to their "Donation Sheep" where patrons who had a particularly good time can donate some cash or change to the Center to help them keep up all their awesome work. 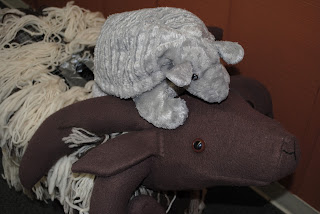 Won't you make a donation? The sheep says she feels so empty inside...
Posted by Claire (and Nikki) at 1:21 PM