As I'm sure all of you (even my few international readers) know, last week a psychopath went on a shooting spree in a movie theatre in Aurora, Colorado and killed a dozen people while also emotional scarring hundreds of other people. Everyone I know out here is thankfully okay, and the response from the community has been overwhelming positive. Luckily there haven't been many copycats, mainly thanks to the vigilance of various police departments across the country.

I've been looking for something to post to the blog to act as filler between adventures and also make some people smile. Good fortune (and my local animal shelters) have given me two adorable pets and a camera phone to record their silliness, so I'm going to make three posts full of pictures and videos of my pup and kitty. I hope you enjoy them and that you share them with someone you know who needs a smile.

Eva's Adventures at the Dog Park

Cherry Creek State Park has an off-leash dog park for members and the general public to use to give their pooches some much-needed running around and socialization. I've taken Eva there three times, and she's LOVED it. She's also very good about coming when called (thanks to treats) or at least "checking in." She loves to play with other dogs in the water and run through fields sniffing stuff and pooping in REALLY inconvenient places. She hurt her paw the last time we went (she was playing too hard), so it's been a while since we've been there. However, we're camping the first weekend of August, and the dog park is one of our top locations to visit. 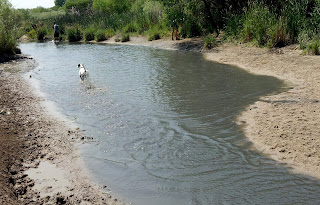 Running through the water is one of her favorite things in the world. Throw a ball for her, and she's in Heaven. 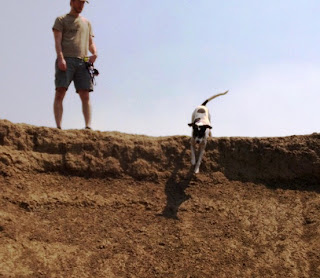 One part of the creek area is accessible only by throwing oneself down an eroded shore. Eva is REALLY good at running up and down the side.

This video is from her first time at the dog park. We weren't sure how she'd do, but she was a hit with everyone, dogs and people both.

Part two of her first time at the dog park

The most recent time Eva was able to go to the dog park. It's much more fun after there's a little rain, and the water level is decently high.
Posted by Claire (and Nikki) at 1:34 PM