For Christmas last year, I gave my niece a My Little Pony "doll" (Rainbow Dash, because my brother can be homophobic, and I like being "gay-friendly, feminist Aunt Nikki"). She basically lost her shit because a) she LOVES MLP, and b) I had managed to buy her favorite pony. (SCORE!) Nostalgic for my own childhood when I had an insane amount of ponies (and according to my mom, mine are still in the attic), I bought one for the white elephant gift exchange at Audra's party. As you may remember though, I wanted to keep the pony all to myself, and by threatening the lives of the other guests, I was able to keep Lyra Heartstrings (not one of the main ponies, apparently). She currently lives behind the business cards and Frida the philodendron on the main part of my desk.

Many people in the office laughed at my pony, and yet they enjoy playing with her hair and moving her around. As a front desk person, many people consider "my stuff" to be "everyone's stuff," since it's so out in the open. So I'm a bit sensitive about items on my desk being moved around/messed with. After a VERY stressful week, I went to pick up Lyra and comb her hair to calm down (because I'm a child, apparently). That was the first time all week that I had noticed she was missing.

I flipped out on Tracy, demanding to know where the pony was. She said she didn't know. I asked if she knew who took it. She said yes, looking more and more terrified by the second as my eyes began to glow red with bloodlust and a deep river of rage that lives deep inside of me and that most people don't see. Then I started angry-crying, and she told me that Marshall had taken Lyra on his vacation as a joke because he thought I'd get a kick out of him treating her like I did Claire. Under normal circumstances, I would have LOVED this opportunity to update the blog with something silly that someone else did as an homage to my country-traveling armadillo. But the stressful week, the bubbling rage, the crying, and my sensitivity about my possessions made me angrier than amused. Had Marshall asked or, wanting to keep it a surprise, someone had mentioned it BEFORE Friday when I discovered it on my own, things would have been better. There were some apologetic emails that got sent around that weekend between Marshall, Tracy, and me, and eventually everything was settled and forgiven.

On Monday, Marshall brought in a stack of pictures that he and his wife Kelly had taken while on their vacation with the pony. He said that they had a lot of fun taking the pictures in different locations. Marshall especially liked it because the pony was just the right side to put in his coat pocket while skiing. He had gone old-school and taken pictures with a film camera and went through great lengths to make sure that he had everything printed before he came into work on Monday. So I apologize for the quality of the pictures; I can only do so much editing.

I'm sure that I'm compressing the actual time line a LOT. After all, Marshall was out for a whole week of mountain fun times. But since I didn't go with him, I don't really know what his itinerary was, and he's a busy guy, so sitting down for an "interview" isn't a possibility. 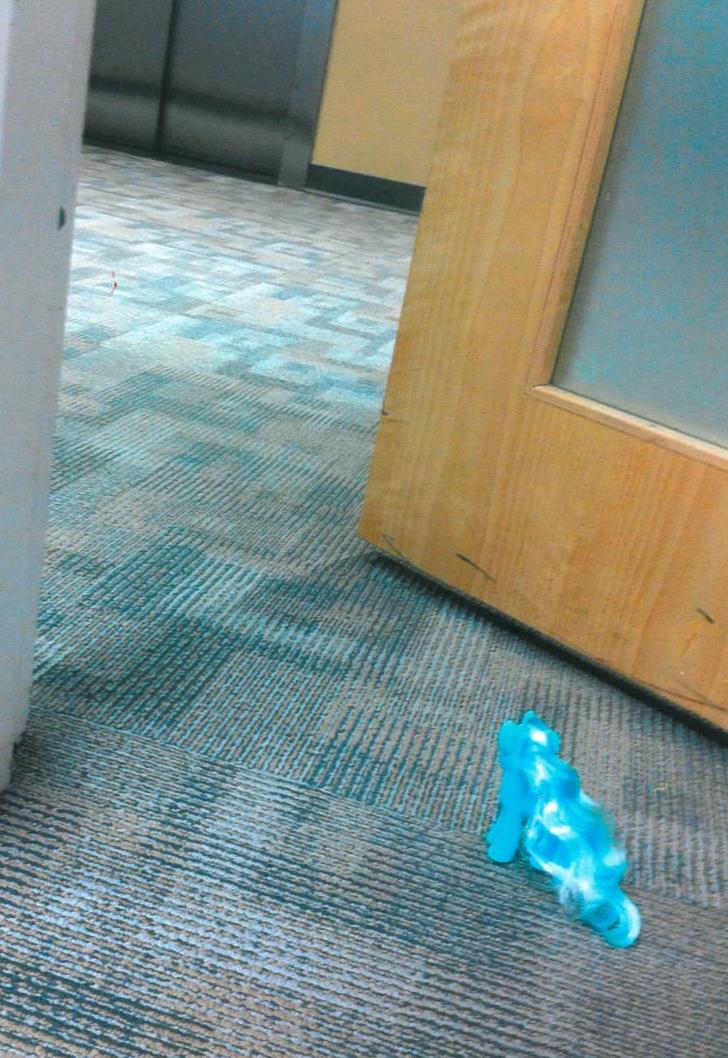 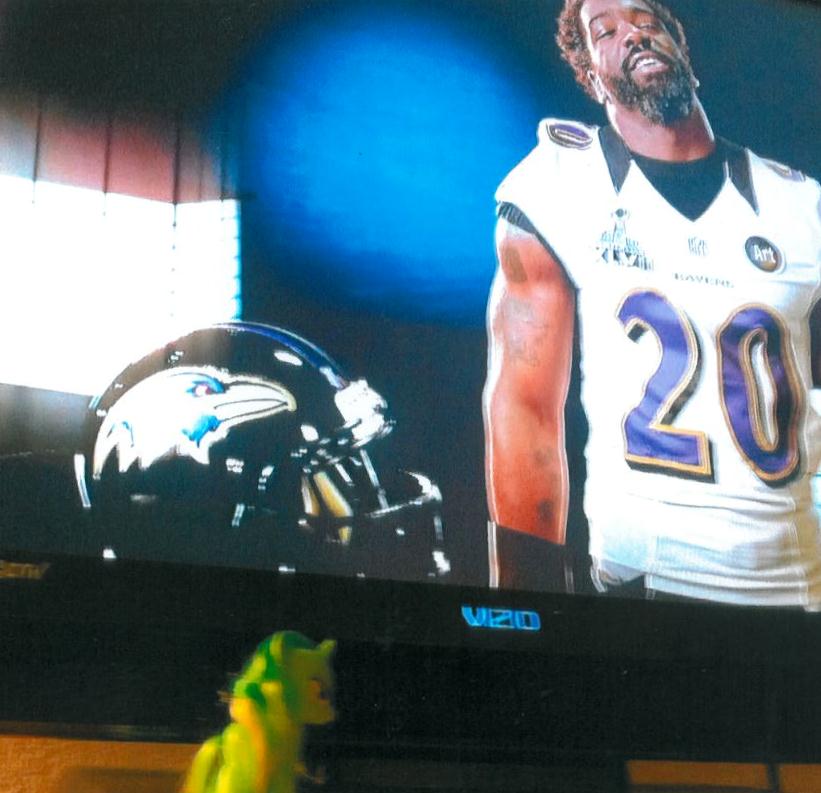 Marshall made sure that Lyra got to watch my team WIN THE SUPER BOWL! 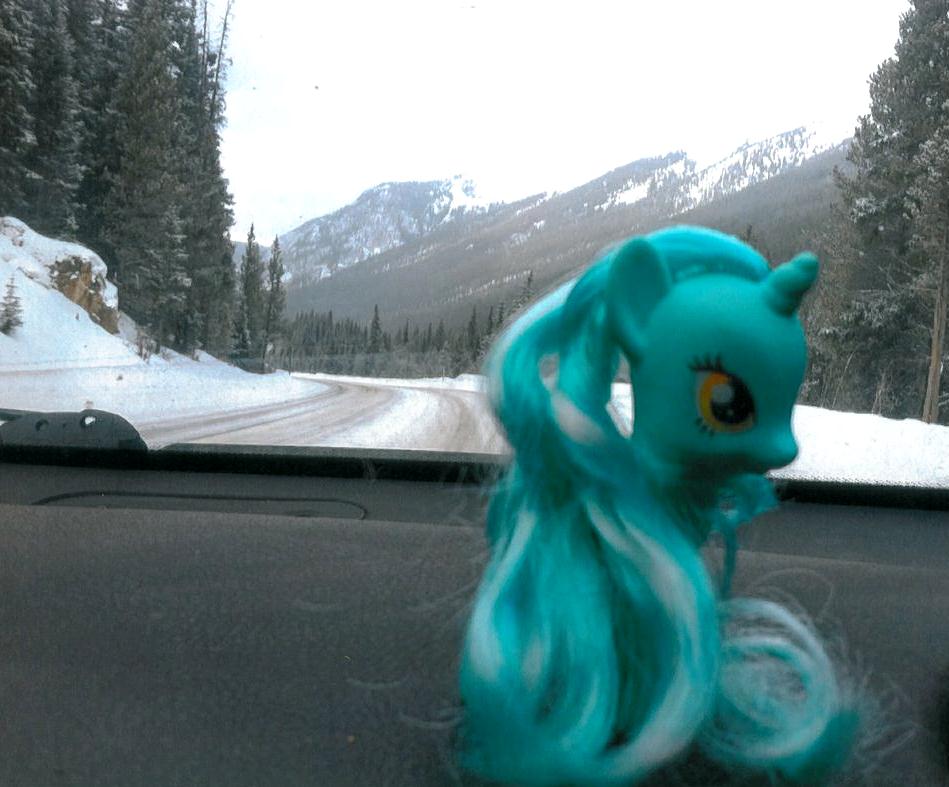 En route to Copper Mountain Ski Resort; this shot was taken on Freemont Pass between Copper and Leadville

The amenities at the condo in Frisco where they all stayed were pretty sweet: 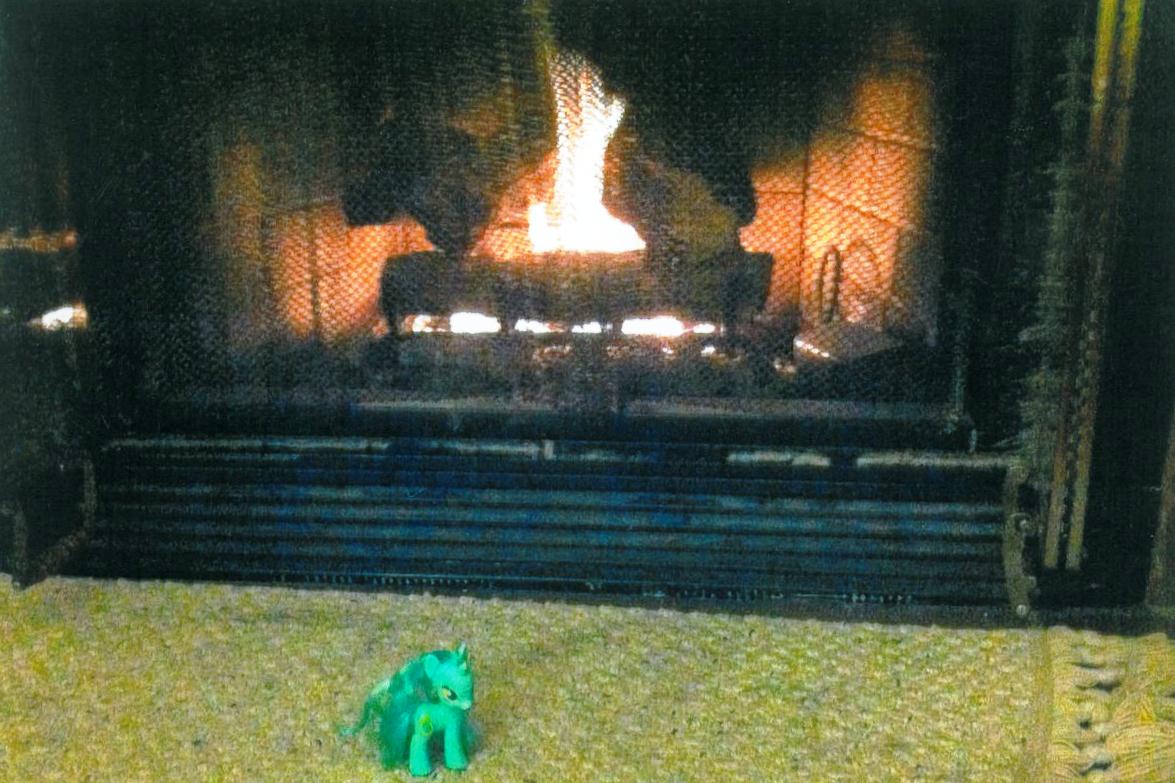 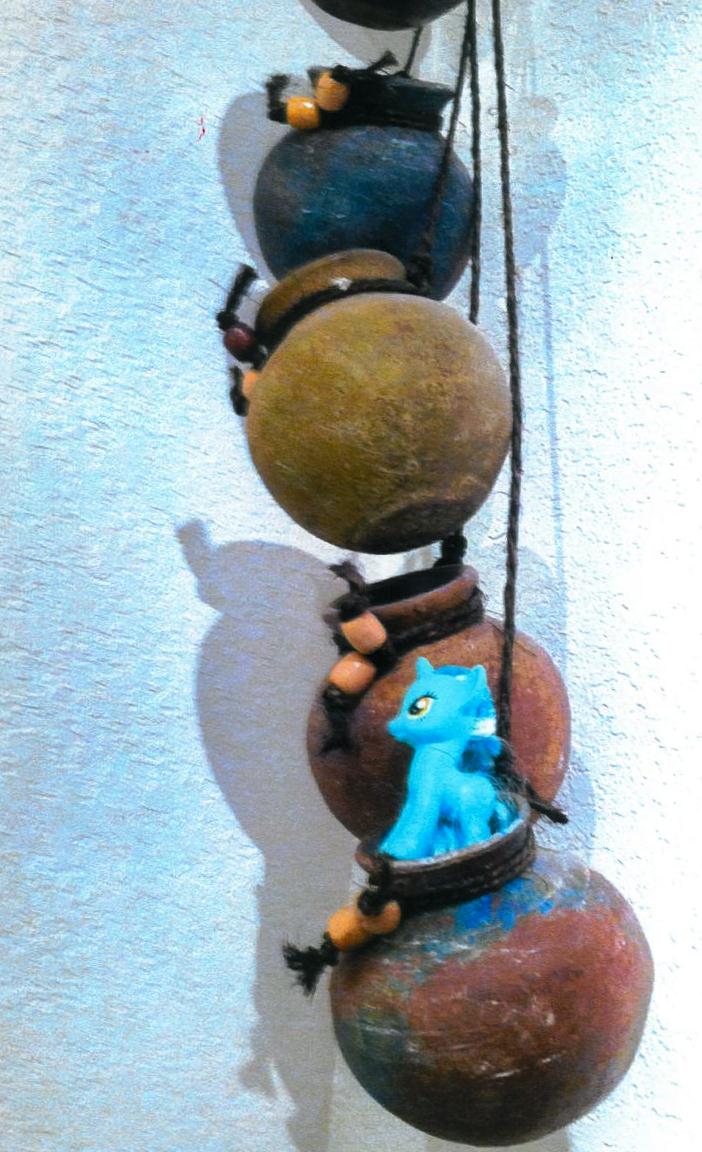 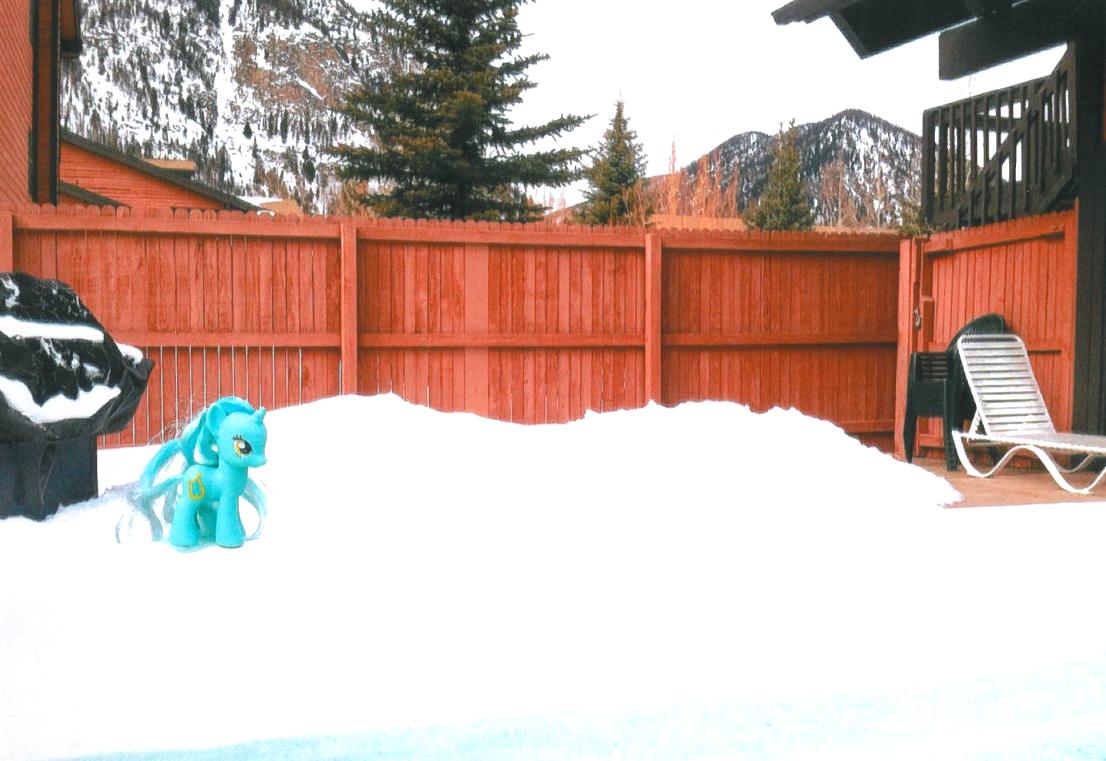 ...a large backyard area for playing in the snow... 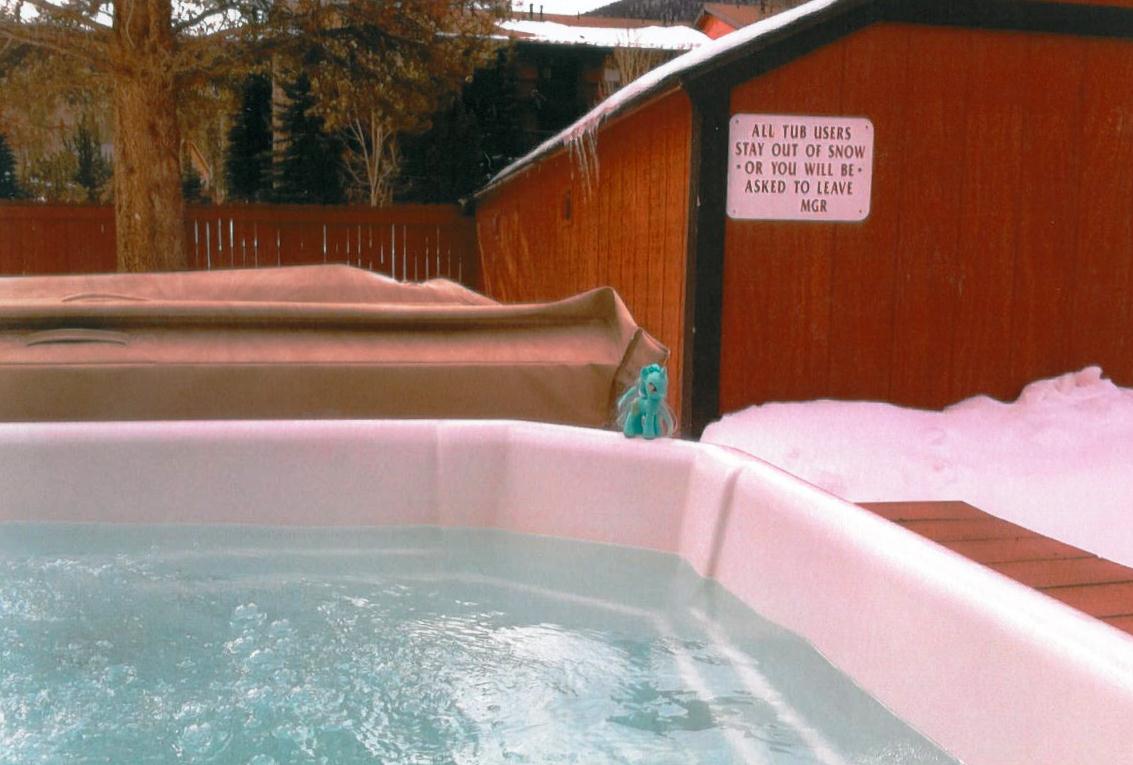 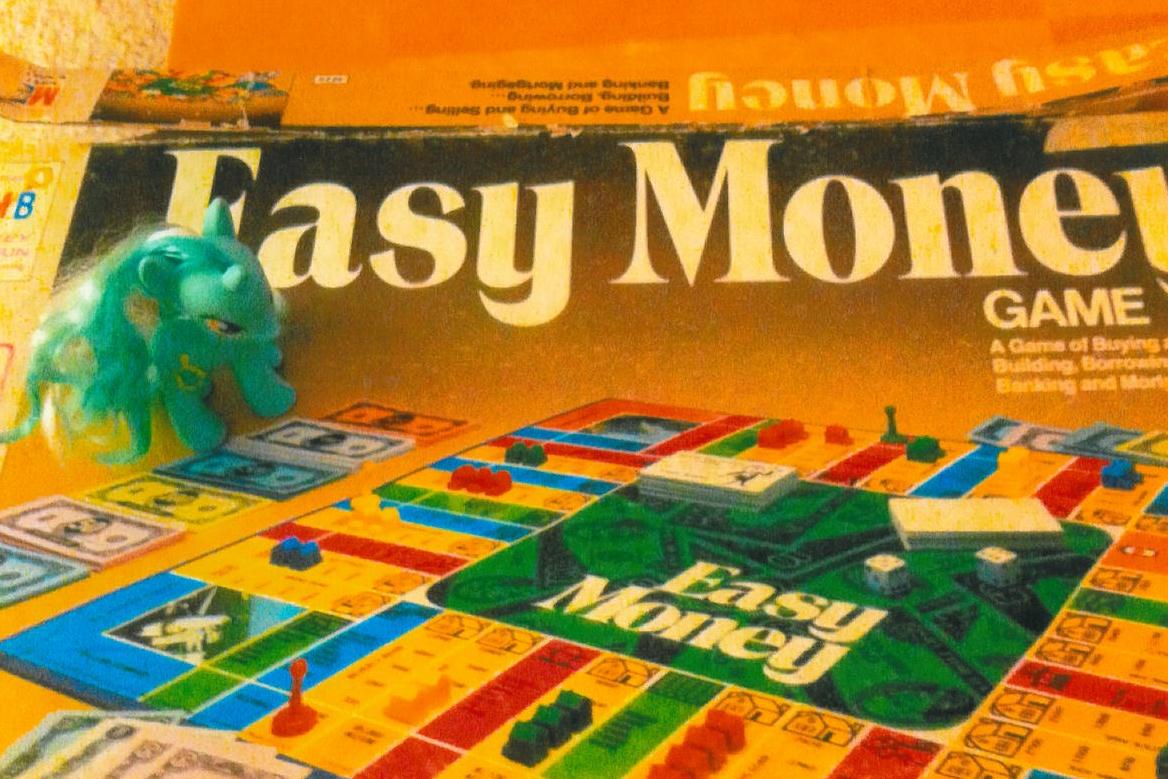 But the real reason why Marshall, Kelly, and Lyra drove up to the mountains was to ski. It's Marshall's favorite activity, but unfortunately, due to a recent knee injury, he's out for the rest of the season. It's really sad panda times. He said that Lyra was a real champ about having her picture taken in the cold temperatures and that she was easy to put in his ski jacket's pocket and take from place to place. 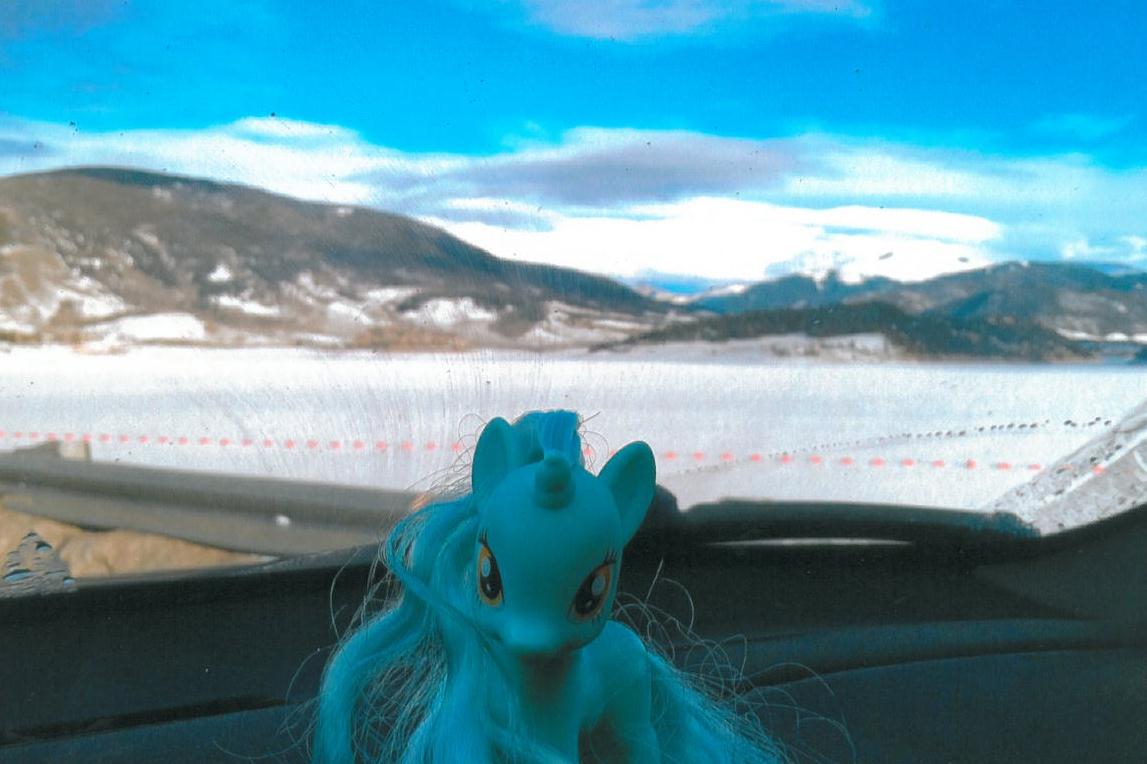 On the way to the ski slopes! 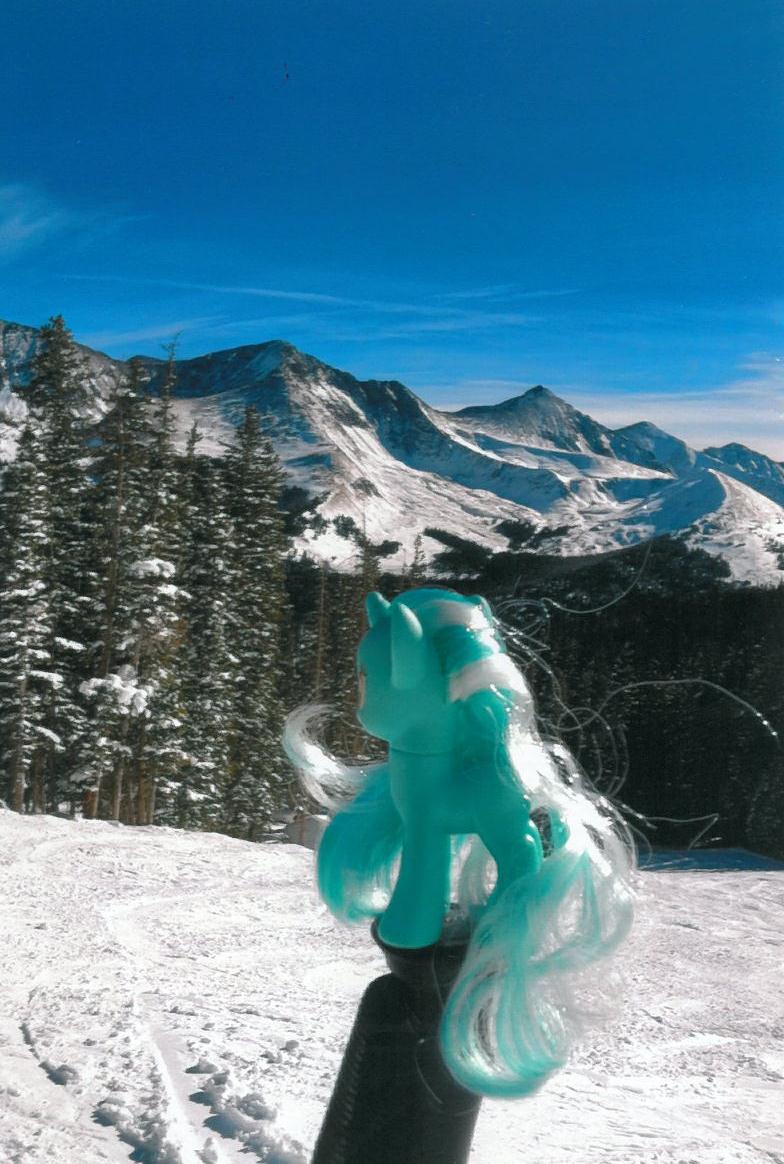 Behold, the majesty of the Colorado Rockies. (She's on Marshall's ski pole in this picture.) 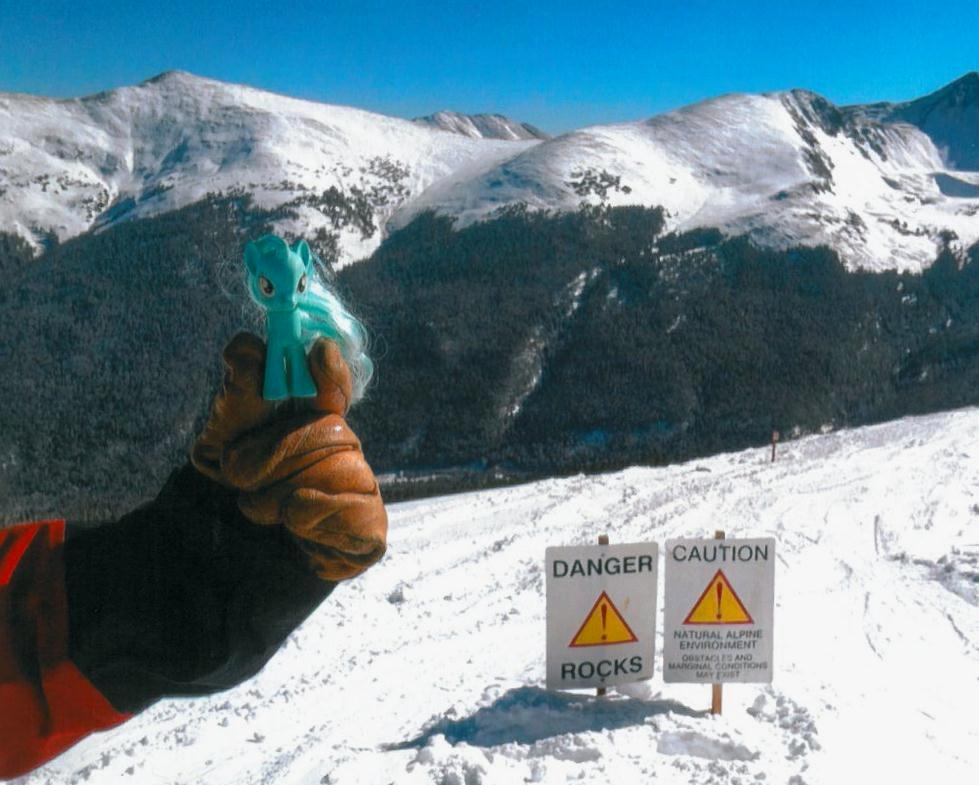 At the top of Spaulding Bowl. Be careful, Lyra! 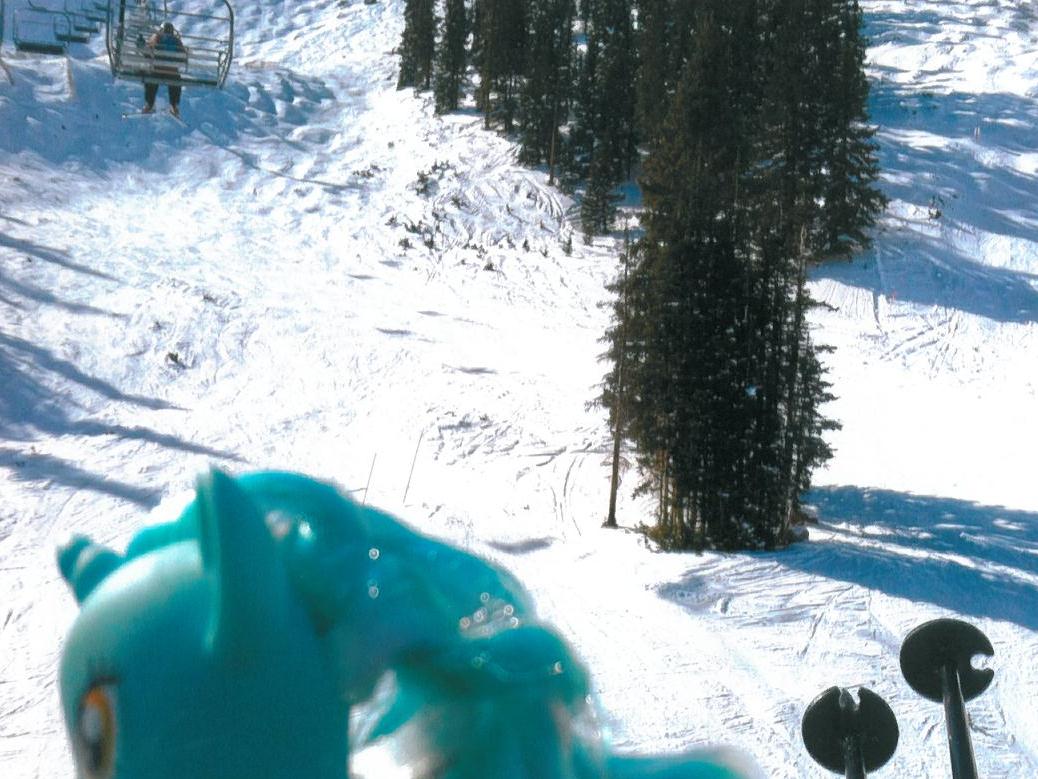 Riding on the ski lift to the top of the mountain, the only thing about skiing that I like. :p 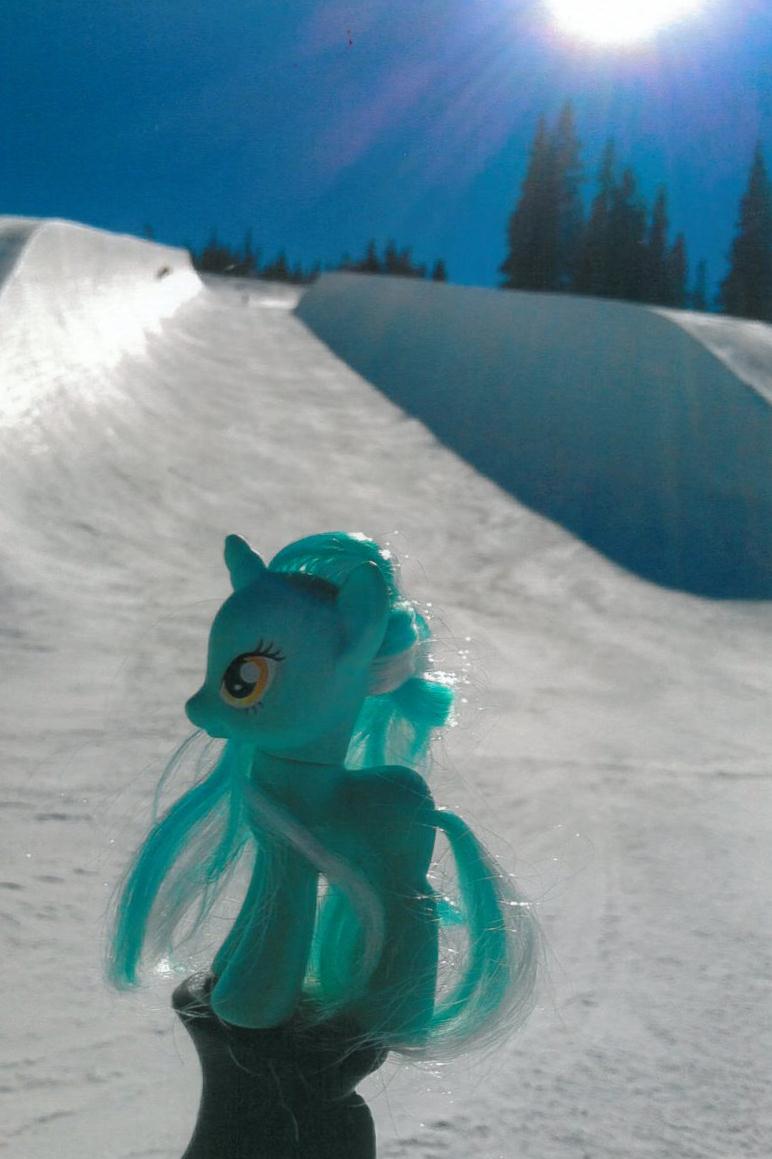 Perfect powder for a day of skiing in the sunshine 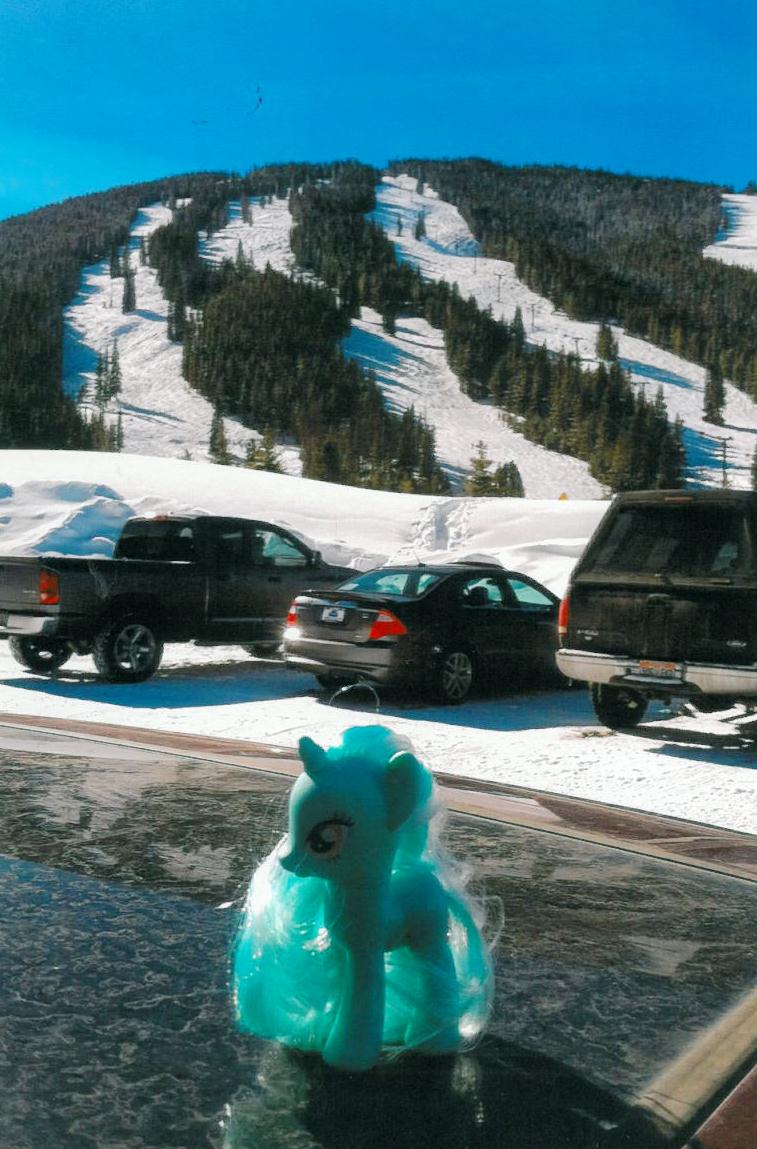 Whew!! Ready to go back to the condo to warm up and relax!

What better way to relax than to head over to an old-time saloon, eat some good food, and drink some good beer? The family headed over to the Blue Spruce Saloon and Bar for dinner. Marshall and Kelly were joined by Kelly's nieces Charlie and Penny and Penny's friend. (Obviously the young girls did NOT partake of the saloon's fine spirits.) 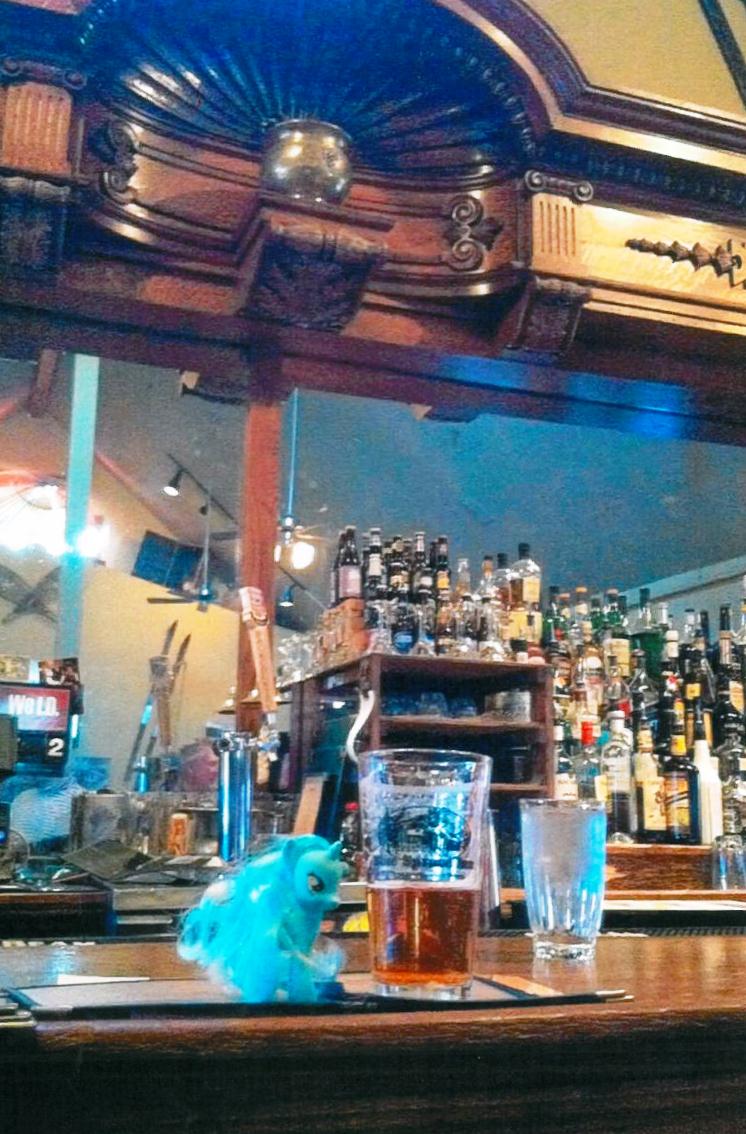 Waiting for a table 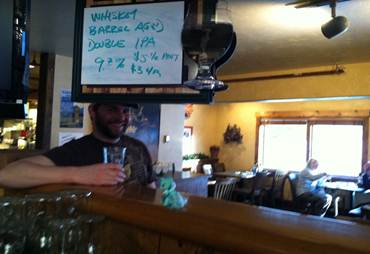 Marshall said that Lyra got all of her drinks for free that day because she flirted heavily with all of the guys at the bar. And here I thought she was such a sweet, innocent little pony! 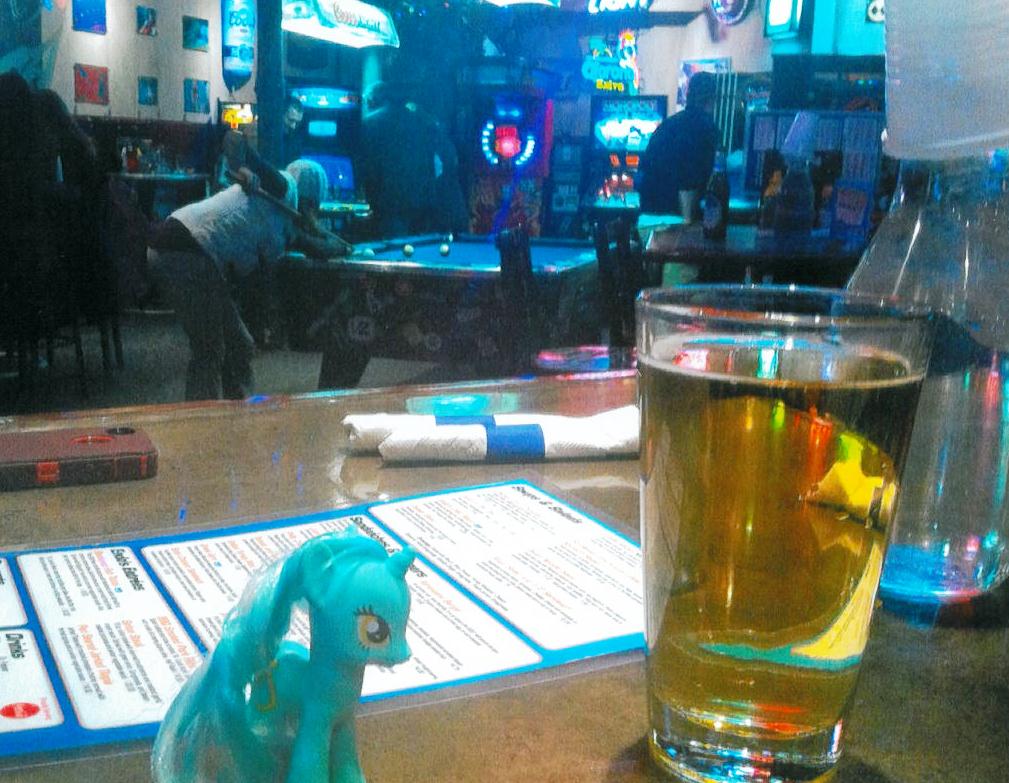 Finally got a table! Time to settle down and order some food to go along with all that beer. 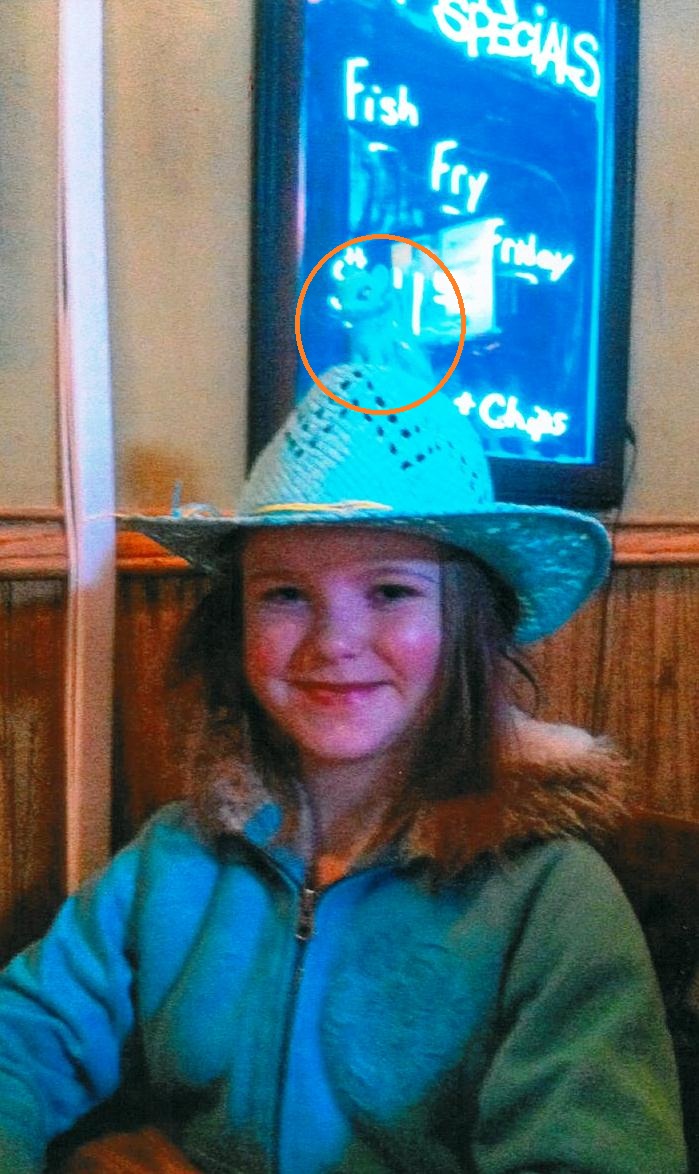 Everyone thought it was great that Charlie's outfit matched Lyra's coloring! I've circled the pony for you so you can find her more easily on top of Charlie's hat. 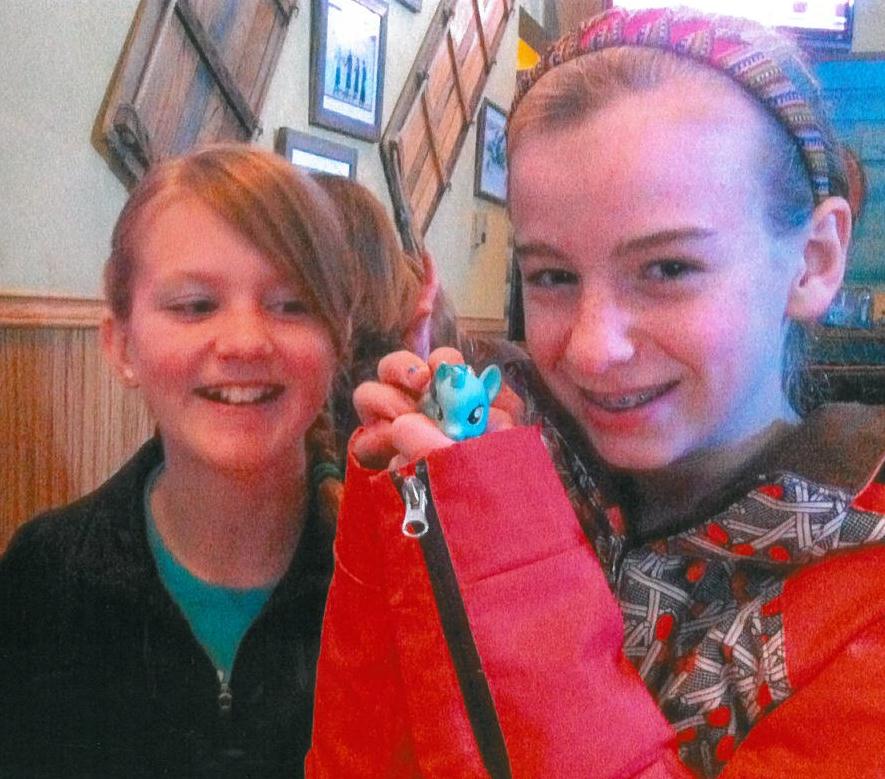 Penny and her friend were also pretty stoked to have Lyra joining them for dinner. I mean, who doesn't like My Little Ponies?! 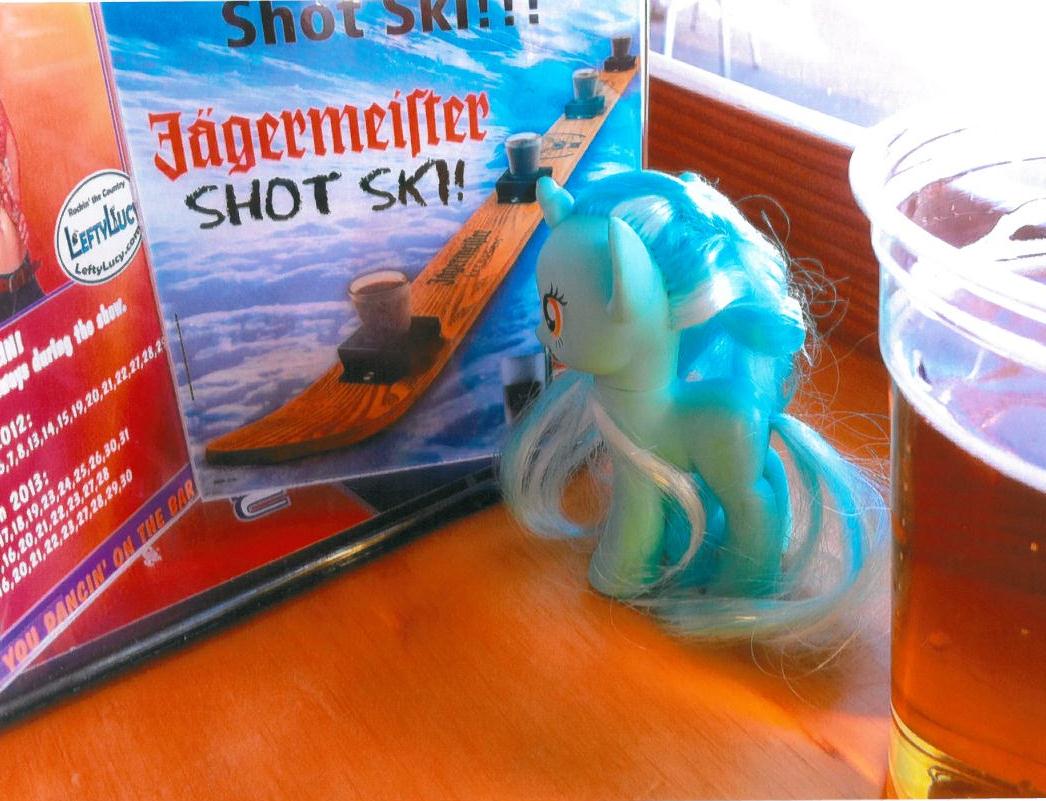 Don't do it, Lyra!! Nothing good can come from that much Jager!

Another day, the crazy party went to Woodward at Copper, a gym with all kinds of "extreme" sports type of things to do. Frankly, I'm mad jealous, as I've always wanted to do these sorts of things. Unfortunately, I'm terribly clumsy with an equilibrium problem, so doing things like skate boarding and leaping off of things into a giant box of foam might not be a good idea for me. 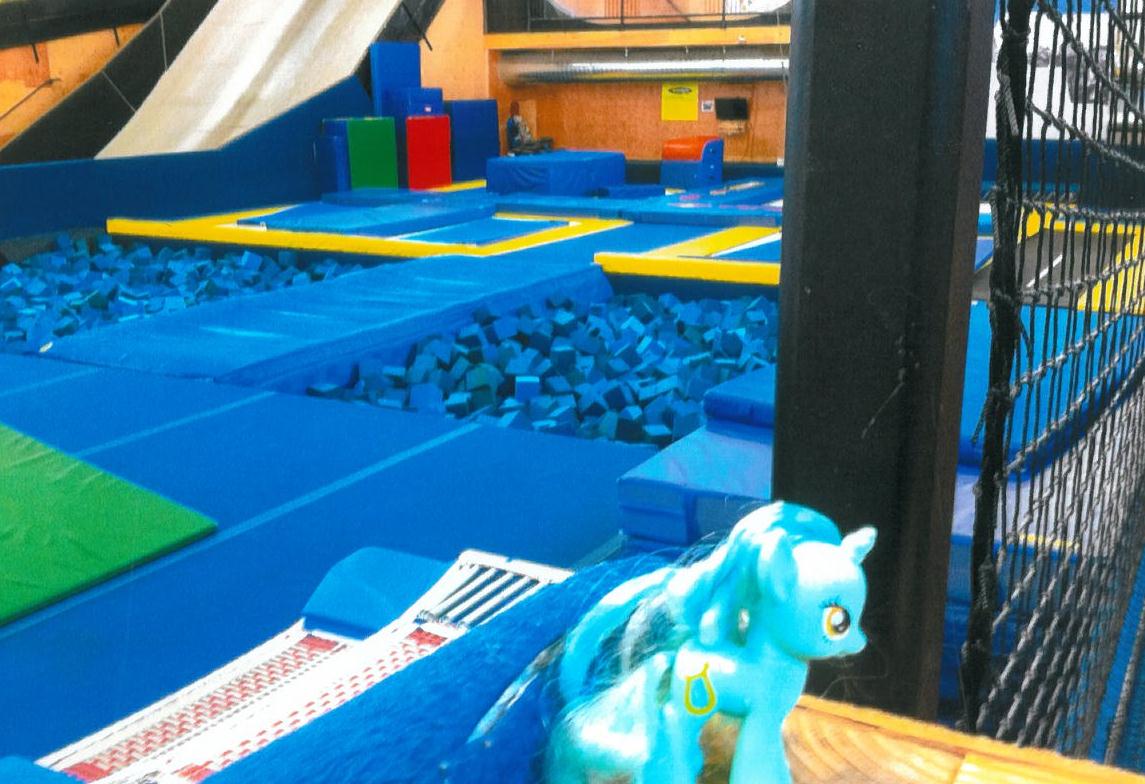 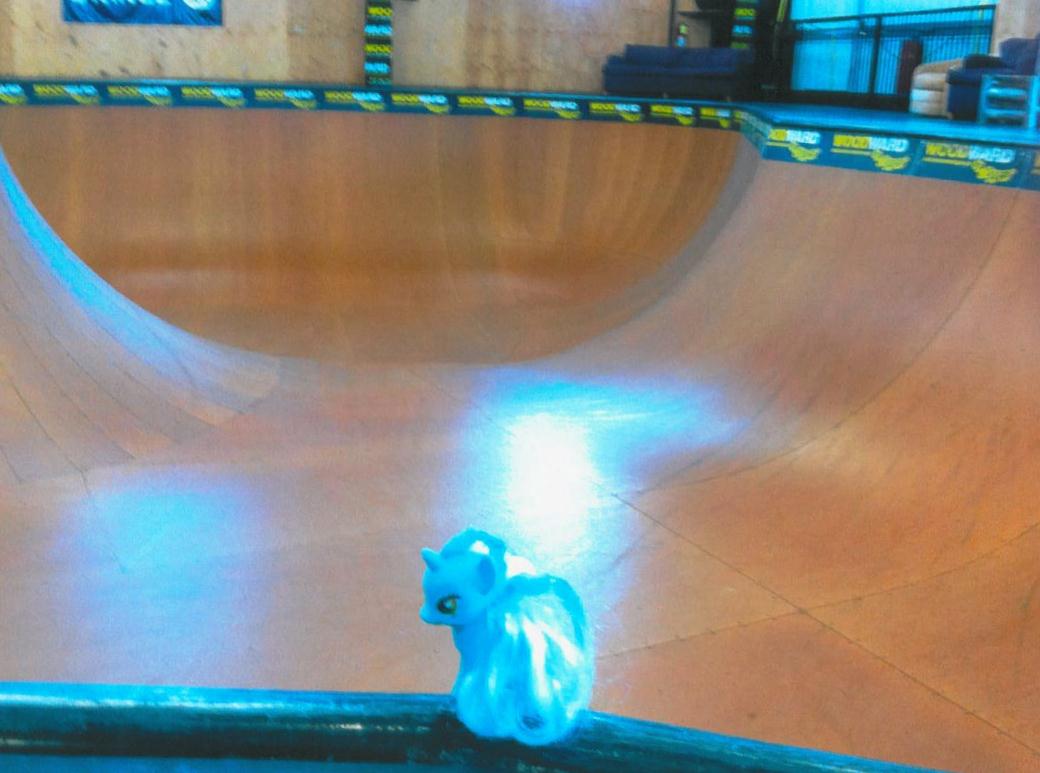 This half pipe was at Copper, and according to Marshall, Lyra had a great time going down it and being all EXTREME! 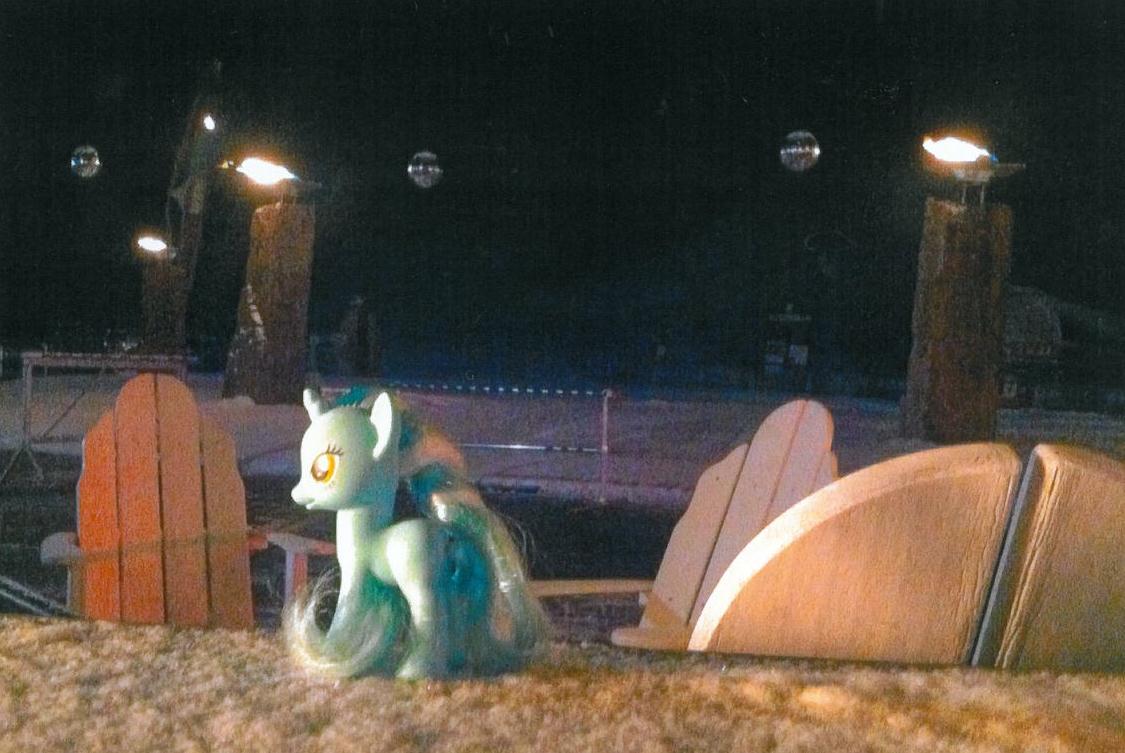 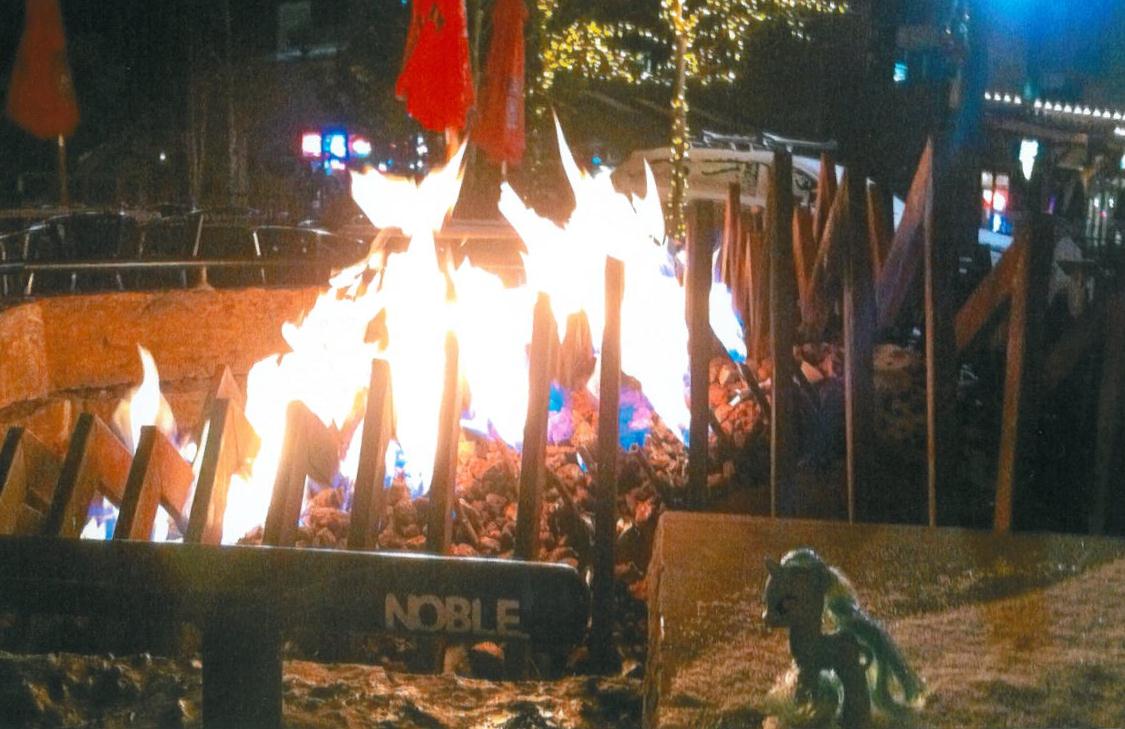 ...spending time in front of an outdoor fire. Don't get too close, Lyra! Remember, you're made of plastic and can melt! Ponies are pretty flammable.

Lyra returned to me in one piece, and I gave Marshall official permission to take her on his next vacation, wherever that may be. He said everyone had fun finding photo-ops for her and it was a good way for the group to have fun together. Perhaps Lyra will get to see as many places as Claire someday!
Posted by Claire (and Nikki) at 3:13 PM