The plan was for Nikki to leave work at noon and meet Lisa and Lauren at Lauren's house to pack the car and be on our way. We were going to set out no later than 1:00pm and make great time zooming through Kansas, where the weather would be lovely, and the sunflowers would be out, turning their faces towards the light.

But that was not to be.

First, Nikki had to clean out and vacuum her car. While she's been going through and removing the trash (mostly gum wrappers because she has an ADDICTION) periodically, she hasn't vacuumed (or washed/dusted) her car SINCE SHE MOVED ACROSS THE COUNTRY!! She says that there's "no point" because most of the dirt and all is from the prairie, and as soon as she'd clean it up, it'd just get dusty or muddy again. I blame it on laziness, frankly. ;p So Nikki pulled her car into Lauren's garage and used Lauren's shop vac to vacuum all the grossness off the floors and the back seats. (Mostly Eva fur back there, but also pine needles from last year's Christmas tree.) Nikki laughed later and told the girls "It's obvious you're my besties because I've NEVER cleaned this car up for anyone else, not even my family when they visited!" So that took a bunch of time.

Then Lisa got stuck at work for a while and didn't get to Lauren's until sometime around 1:00 or 1:30. Totally valid as work > vacations, but it was still whompsy.

We finally got on the road around 2:00 but immediately had to stop off at the gas station to fill up Becky's (Nikki's car) gas tank and grab ice for the cooler and sparkling water for the girls. (When they realized that they couldn't fit the whole bag of ice in the smallish cooler, Nikki took the giant chunk of ice that remained and overhand threw it across the parking lot and laughed maniacally as it shattered into a million ice pieces. She maniacally laughed a LOT on this trip. Nikki Note: Whatevs.)

When Nikki, Steve, Tasha, and I drove from Baltimore to Denver, we saw signs for Limon, Colorado the second we crossed the Kansas border. "Where is Limon? It sounds important if it's being 'advertised' the moment we drive into the state before its state! WE MUST GO TO LIMON." Unfortunately, we were reaching our travel deadline and had to forgo making a stop at this mysterious city, but Nikki added visiting Limon to her bucket list because she's stubborn and weird like that. As this was an EPIC ROAD TRIP where dreams would come true, the girls made a little detour and stopped off at what turned out to be not much more than a place for truckers to fill up on gas and get food. 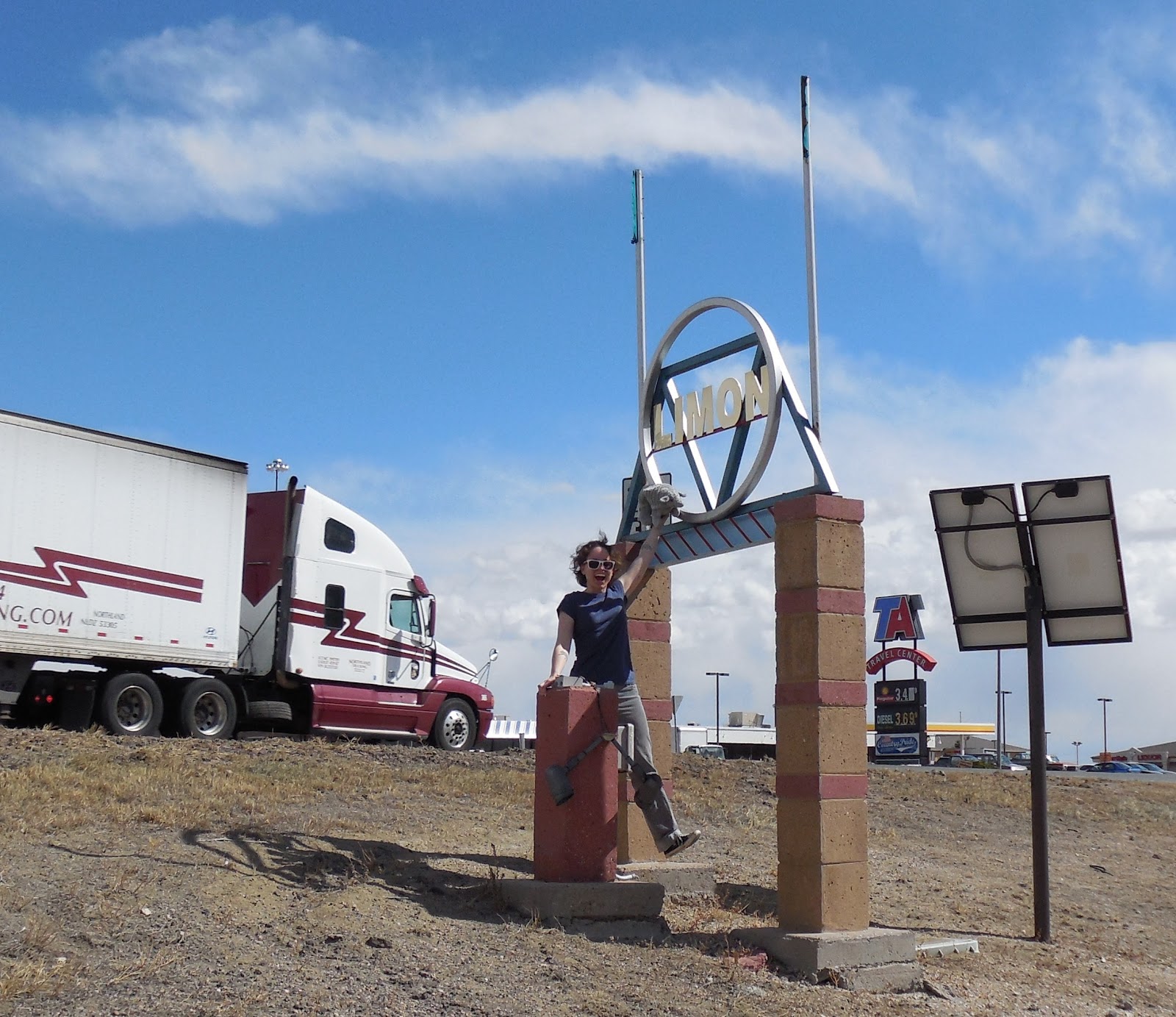 She was WAAAAYY too excited about this.

As we were on our way to take this picture with the sign, we were flagged down by a hitch-hiker. He said that he needed money for bus fare, and could we spare anything? We said no and started walking away, THEN he asked us for FIVE DOLLARS (pretty gutsy, if you ask me) for gas money. "I thought you didn't have a car," we pointed out. He just laughed. People are so weird. BUT!!!! The best thing ever happened -Lisa found a dollar near the sign! We took it as a message from Fate and bought a scratch-off lotto ticket with it...AND WE WON A DOLLAR! 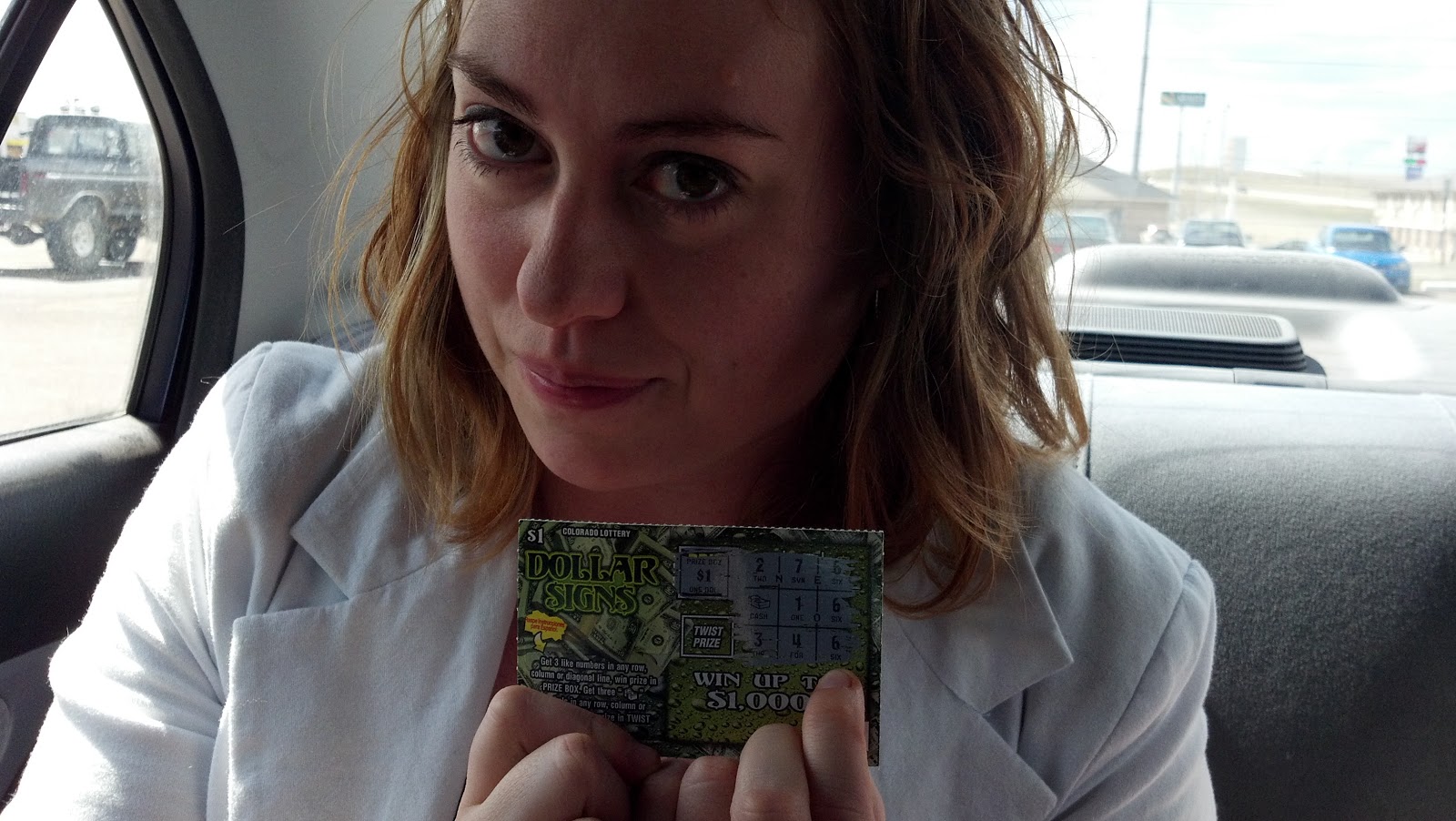 Lisa with our winning ticket. The lucky numbers are 666!!!

Lauren traded in that ticket for another one to see if we could keep our lucky streak going. Unfortunately, it wasn't a winner. (She had chosen a "fire"-themed ticket, I think, playing off our "devil" theme from the last ticket.) We figured that we hadn't really lost any money, so we went on our way still in good spirits.

As we entered the far east side of Colorado, the weather started to turn. Wind was blowing in from the north, making it really hard for Nikki to keep Becky from swerving to the right. Tumbleweeds attacked us from all sides; Nikki ran over a bunch and hoped they weren't stuck under her car, clinging to the important parts that make cars run. Then the rain started POURING down on us. Wind, rain, tumbleweeds, no flowers...it made for a depressing start to our drive. 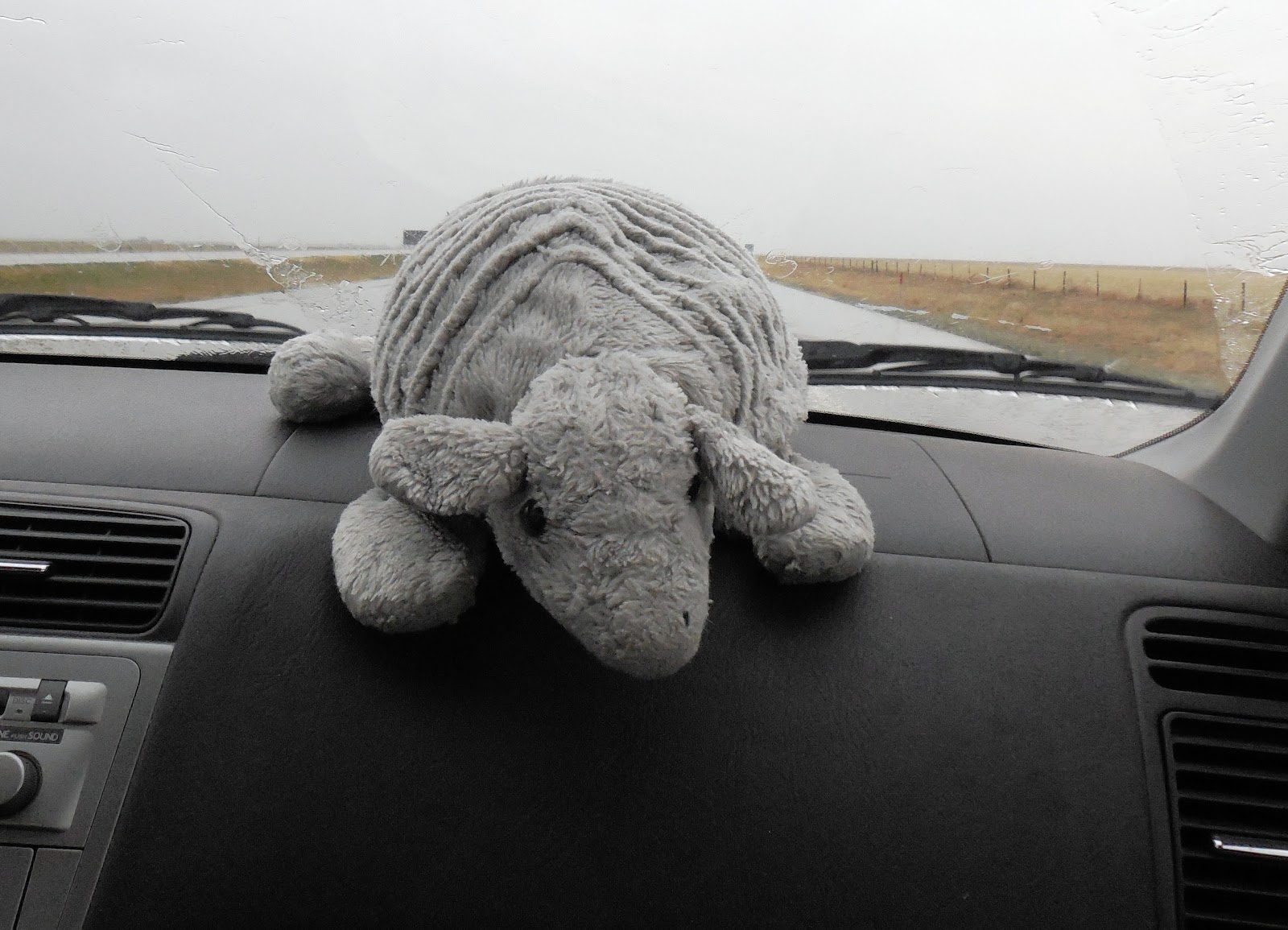 You know it's bad weather when the sky's the same color I am!

Eventually we crossed into Kansas. The weather was still bad for a few miles, so we ran into a McDonald's for a bathroom break and to give in to our basest urges and split a small fry and get milkshakes. Om nom nom...no regrets. We continued on I-70, listening to pop music and talking about a variety of topics until we saw signs on the side of the road advertising a 6-legged cow, an 8,000 pound prairie dog, and a petting zoo with all sorts of wonders and excitement. Nikki remembered the signs from her trip out West, and her coworker had been talking about it for WEEKS, so we decided to take another detour and check it out.

With every mile leading us closer and closer to this epic sideshow, our excitement grew and grew. Finally...WE WERE THERE! 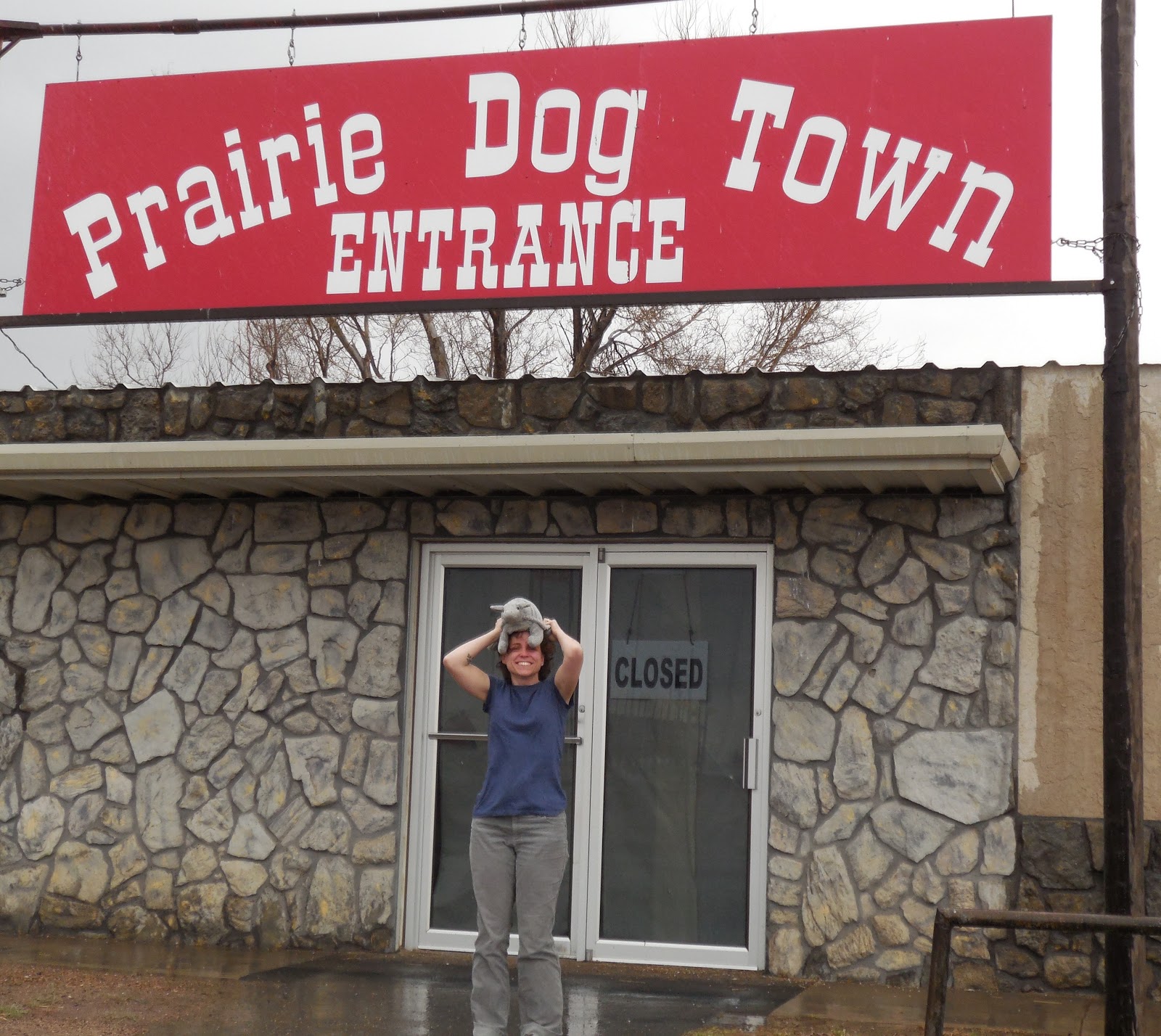 ...Only to discover it was closed. Forever.

Even though the signs were still up for miles and miles on arguably the largest/longest/most important highway in America where ANYONE can see them, the owners of Prairie Dog Town had closed up shop without notice. 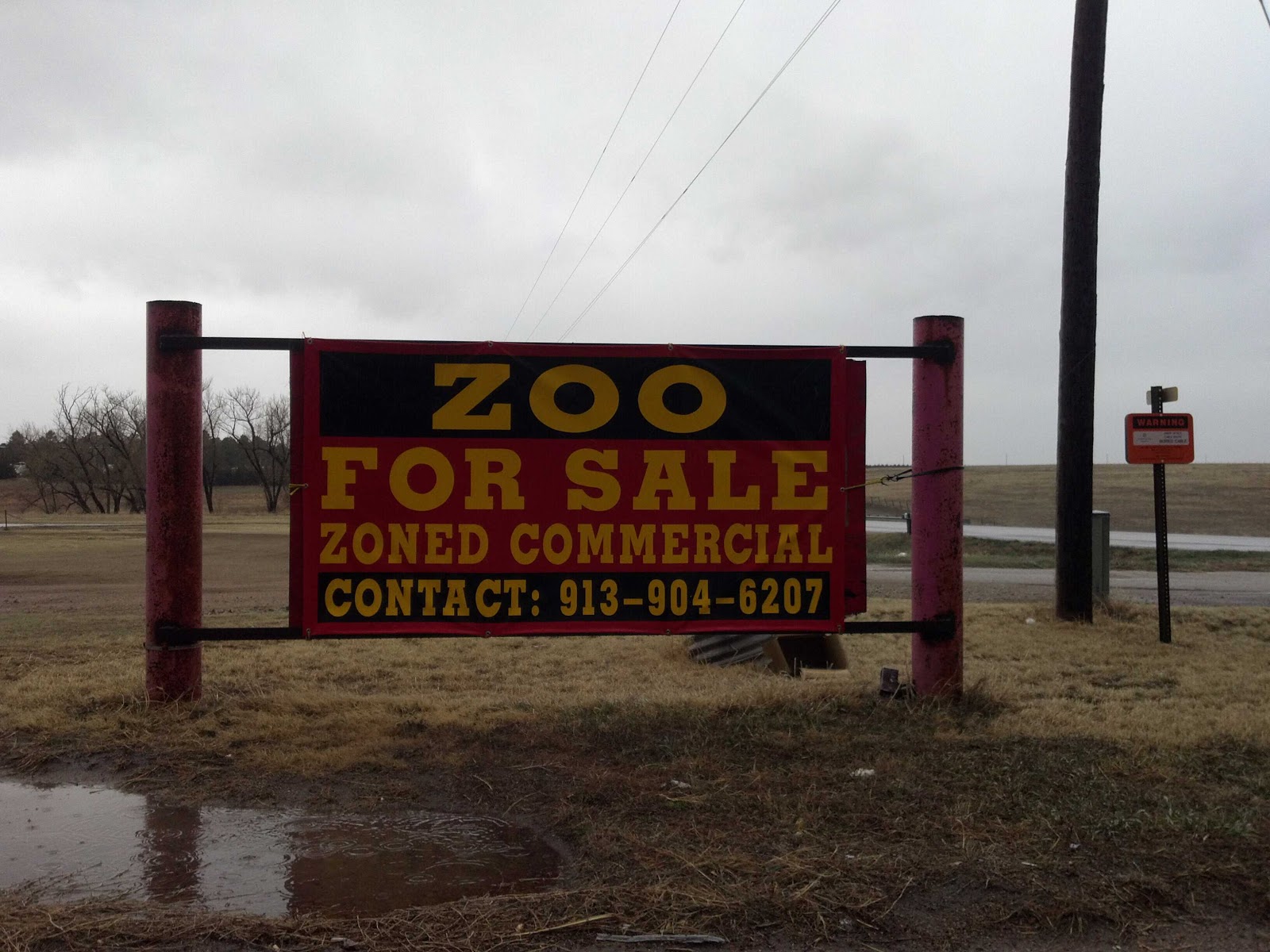 We all entertained the idea of buying the zoo, just like that family does in that Matt Damon movie, but I pointed out that a) none of us had that kind of money, and b) we'd have to live in Kansas. We scrapped the idea and kept going.

Our ultimate destination for the night was a hotel in Manhattan, Kansas ("the Little Apple") that we were staying in for free because Lauren's aunt used her hotel points for us. (THANKS!!!) The hotel was SOOOOO much nicer than any place I've ever stayed with Nikki; I'll have to start hanging out with Lauren's aunt more. 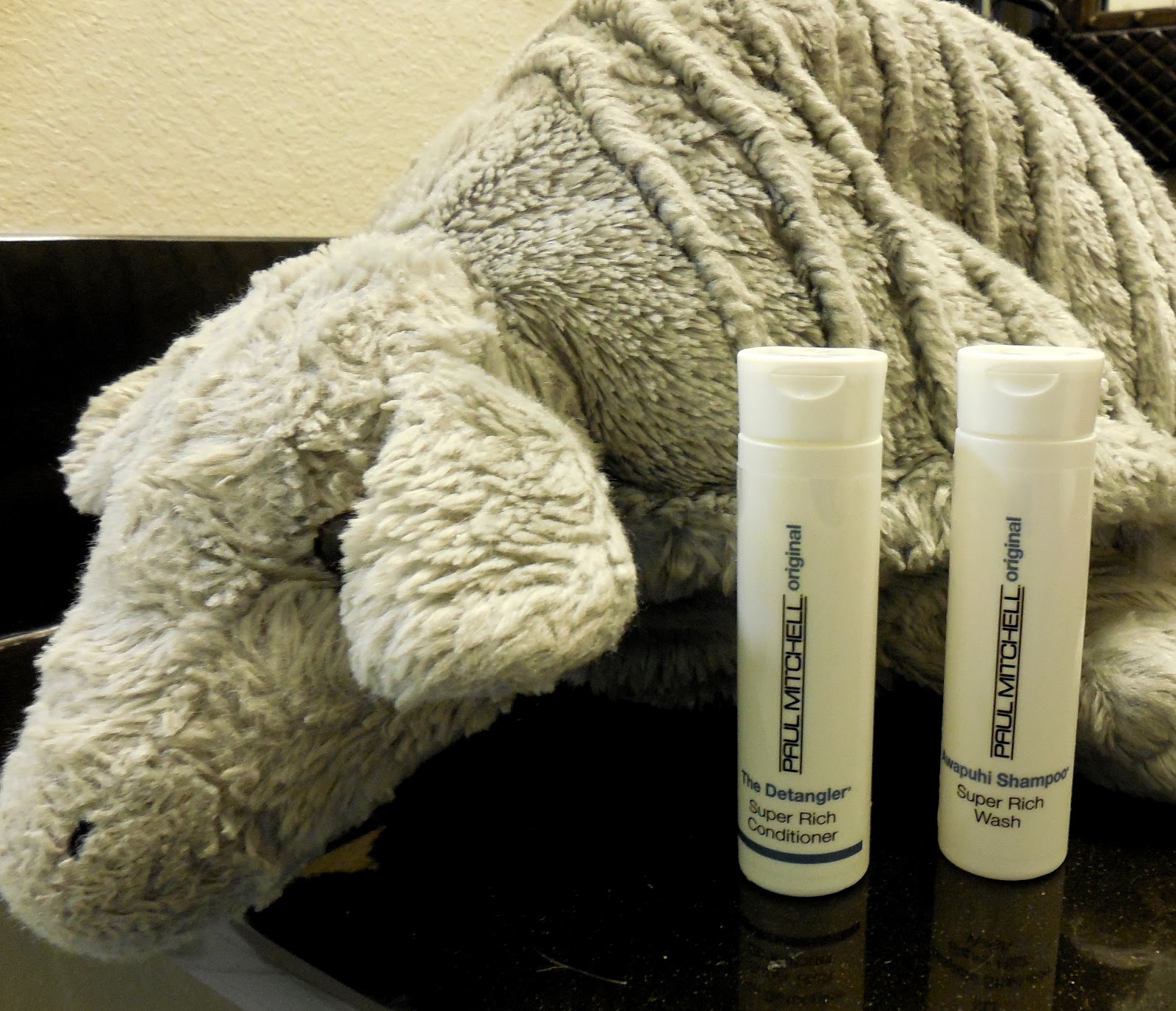 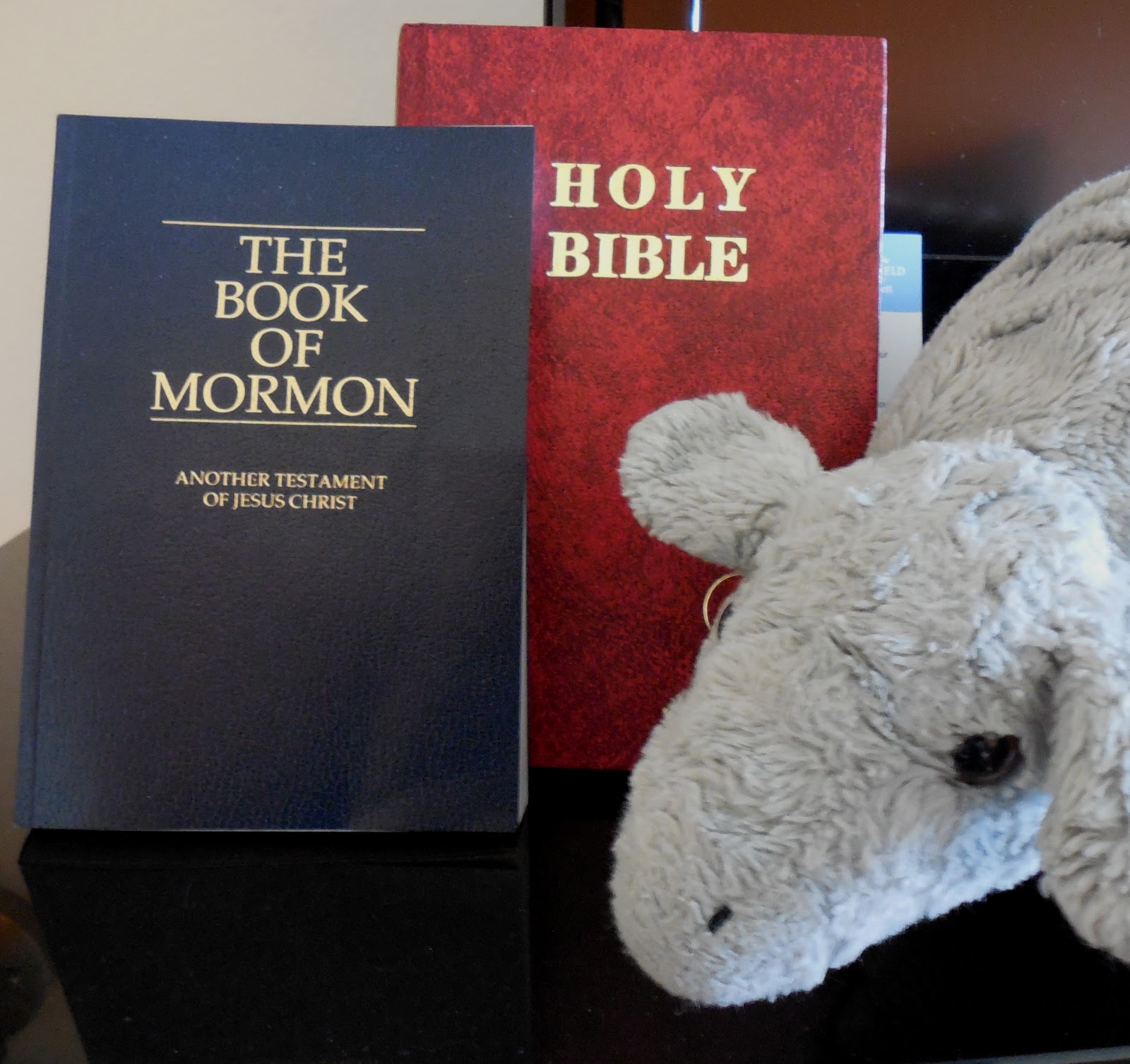 TWO different kinds of bibles for when we're having an existential crisis of faith. Which to choose?! 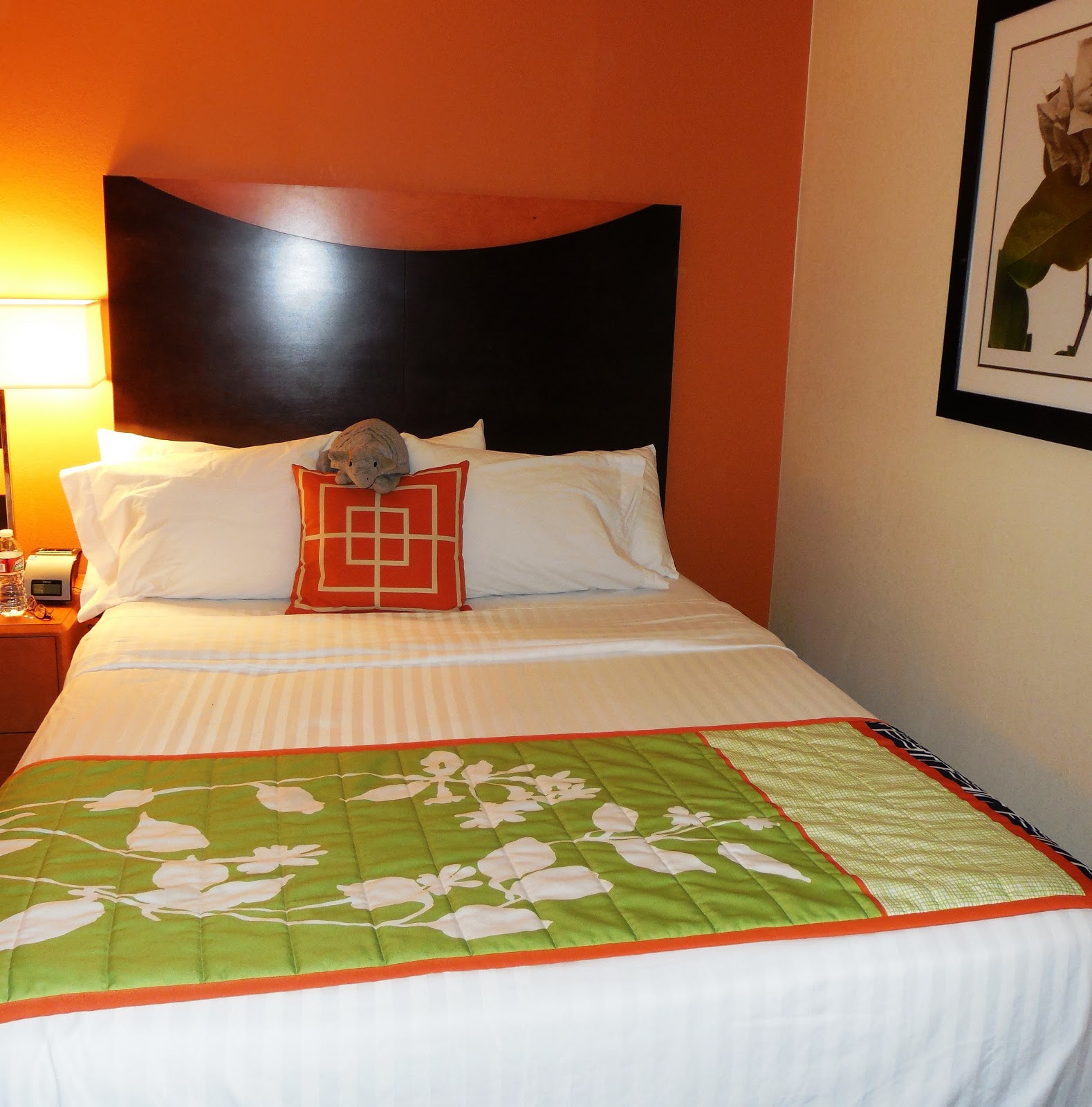 Sleeping on that bed was like sleeping on a heavenly cloud, surrounded by angels and fluffy animals. Nikki said the feather pillows didn't offer a lot of neck support, but I thought it was fine.

Before we got to the hotel, we had decided to go to dinner at a restaurant that Lisa recommended, as the name of the place was really funny: Carlos O'Kelly's, a strange Mexican-Irish sounding combination/fusion restaurant. 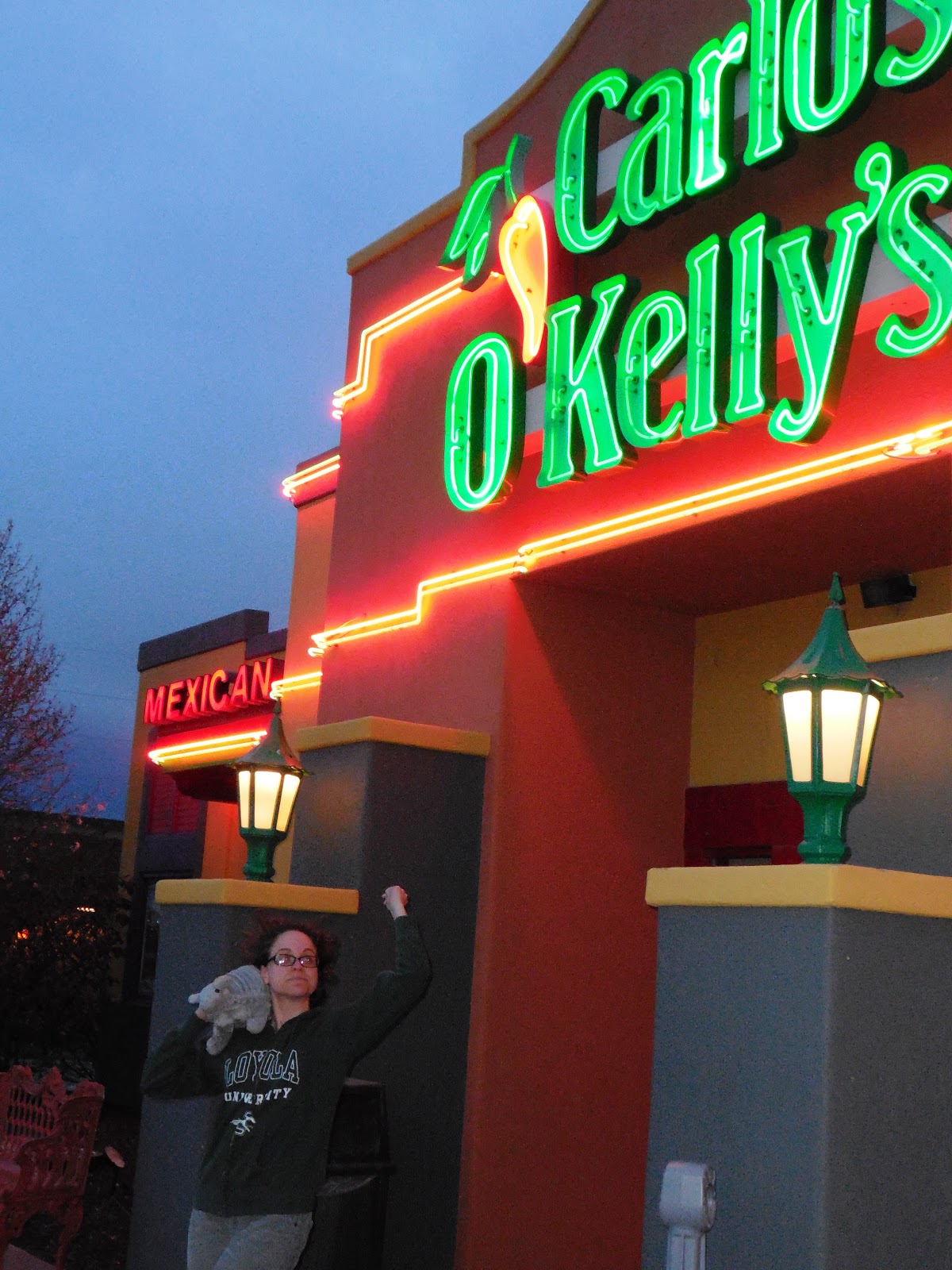 Pretending to be a flamenco dancer

Nikki was disappointed that they really didn't play up the fusion-soundingness more. Why not have corned beef tacos? More things with potatoes in them? Lamb stew with some Mexican seasonings? Nikki & Lisa had the "Inspired Brisket Tacos," which had this GIANT piece of fried cheese on the side of it. The girls were in love. I filled up on salsa. Lauren had the spinach and mushroom quesadilla because she's a vegetarian. I split some of her quesadilla because om nom nom veggies! 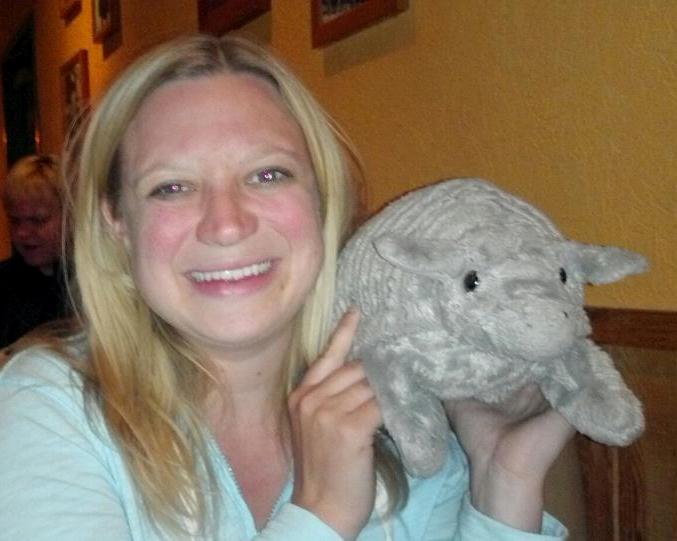 Our waitress was AMAZING and took very good care of us. She was also a big fan of me, which I'm always pleased with. We gave her a great tip and left a lovely note of appreciation. :) We retired to the hotel room, where we relaxed and then froze to death because Lisa had cranked the AC, and then none of us thought to turn it off when we couldn't make it warmer (after trying multiple times in the middle of the night). I just did the same thing I did when I go camping - snuggle as close to Nikki as I can and steal all the covers. Despite the chill, we all slept really well, and after grabbing some food from the complimentary breakfast bar, we continued east towards Wamego, Kansas.